"The New Flesh" at ICOSA Gallery

It’s a body of work, but the anatomy isn’t necessarily of this Earth 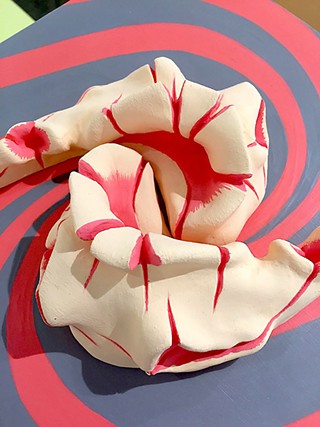 Sometimes the questions of "Where did we come from?" and "Where are we going?" distract from the more basic question of "What the hell are we?"

On the other hand – that is, if we have hands – it could be argued that the first two questions, if answered in any depth, will also provide an answer toward unpacking the mysteries of the third question.

"The New Flesh" is an exhibition of new art by artists Matt Rebholz and Terra Gools­by, presented at ICOSA Gallery in the East­side's multivenue Canopy complex. "This collection of interdimensional work," the exhibition notes inform us, "examines the terrains and forms of speculative fiction, offering encounters with bodily and terrestrial alternatives for an uncertain future." Yes, and I'm thinking this show might be an answer – or an array of rich clues – toward unpacking (simultaneously) all three of the questions posed above.

The two Austin-based artists aren't just visiting separate collections upon us: "The New Flesh" features a series of collaborations between Rebholz (the graphic novelist whose book The Astronomer is a psychedelic epic of sci-fi narrative that's still underway) and Goolsby (the sculptor whose incorporation of unexpected textures and materials often place her ceramic works in some embassy of the Uncanny Valley). So the ICOSA Gallery, in addition to containing their individual works on the walls, also presents their two-person works on pedestals within the spare space.

Goolsby supplies the sculpting necessary for these enplinthed pieces, rendering connected or sequential parts of what may be read as flesh, what may be perceived as bones that provided structure to flesh; Rebholz, the gouachemaster, lavishes the pedestal tops with graphic patterns that have welcomed or responded to and anyway now frame the Goolsbian objects so carefully arranged thereon.

This all looks like a museum sort of deal to me. A natural history museum, I mean, as opposed to a gallery show offering recent art that stands alone. "The New Flesh" registers as a curated collection of artifacts culled from a history of worldbuilding, corporeal samples from a strange and deeply imagined cosmology. Maybe like background props and diagrams from some in-progress Jodorowsky film called Posthuman Diaspora in the General Vicinity of Tau Ceti, you know? I half expected an extraterrestrial version of Sir David Atten­borough to show up as docent and relate the specific backstories of these things.

YMMV, as the internet's taught us to say; but, to me, what I've described above is a good thing. If it seems like such might be your jam, too, citizen, you'd better get a move on – the show's up for only a couple more days. 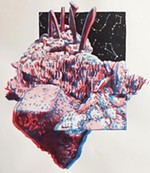