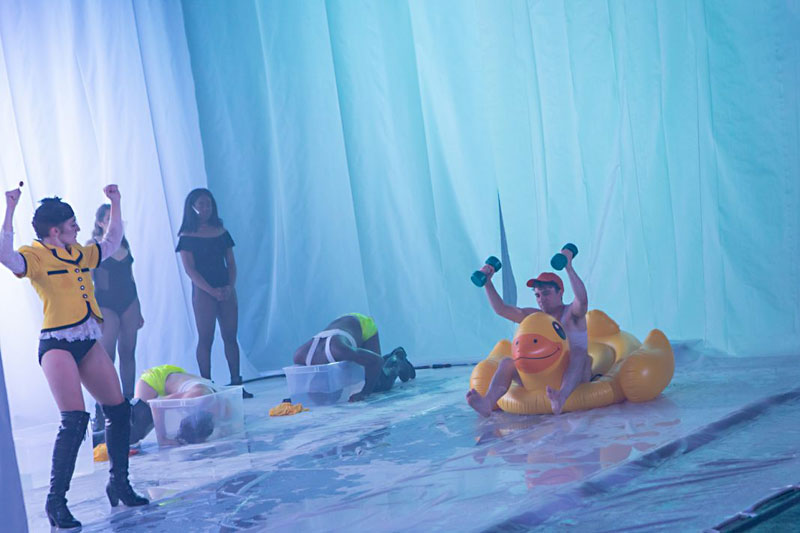 1) RUB A DUCK (Frank Wo/Men Collective) The collective's most recent kinetic visitation into our mundane realm (from whatever dimension of sexuality-disrupting brilliance they're based in) was a spectacle of mind-blowing movement and moist mayhem we can only hope to experience more of.

2) PLANO (Paper Chairs) Every thing that this celebrated company has ever done right – acting, directing, designing, etc. – came together with stunning force in a rapid-fire, note-perfect staging of Will Arbery's surreal yet deeply familiar tale of three sisters living their interwoven lives as on a darkling Plano.

3) GHOST QUARTET (Penfold Theatre Company) Dave Malloy's complex musical ghost tale was a welcome contrast to the splatterpunk goregasms so often proffered for profit 'round All Hallows' Eve. Superbly presented and suggesting that the only way arch-chanteuse Sarah Marie Curry can top her performance here would be to meld with the Phoenix Force.

5) GORINTO (Church of the Friendly Ghost) This concert by Drew Silverman and his cohort of world-class musicians is the sort of thing we love to listen to when we're tripping or just want to feel like we're tripping: vibrant, swirling, complexly layered, a sort of sonic ocean where the tides are in cahoots with your synaptic firings. Performed by hidden artists live in the darkened Ground Floor Theatre, while the audience lay upon thick rugs and pillows and look'd up in perfect ambience at the ceiling's projected stars.

6) DIMENSION SCULPTURE PARK (Dimension Gallery) The sculptural shows for which Dimension Gallery is renowned have manifested all large-scale and resplendent and permanent in a sparsely wooded and highly welcoming (and highly Instagrammable) city-subsidized park across from the instigating venue on Springdale – and this is nothing but a win for all of Austin.

7) DAVIS GALLERY In a year in which this gallery brought us a double dose of Denise Fulton's and Sam Yeates' figurative wonderments, the community's lovingly quilted homage to Kristin Peabody, the vivid nature-based glories of "Lone Star Wild," a Randall Reid retrospective, and more, we're not even going to attempt narrowing it down to one show.

8) BUTRIDGE GALLERY (Dougherty Arts Center) What we said above goes for this place, too. Who'da thunk it, years ago, that the old cultural workhouse of a city institution would be the site of so many extraordinary visual-arts displays, championing works by Heidi Pitre, Meeghan Morongova, Dave McClinton, the unforgettably couch-enhancing Denise Elliott Jones, and other local talents?

9) NORTHERN-SOUTHERN GALLERY Yeah, ibid, and make it a threefer. Phillip Niemeyer's second iteration of this gallery is maybe half the size of the one on Koenig, but we'd swear this newer Eastside venue is also twice as potent – with an ever-expanding roster of artists pushing various envelopes of expression while also keeping the best tenets of graphic design sharply in focus.

10) "THE STORY OF THE DEER IN THE ROAD" (CAMIBAart) Valerie Fowler's intense florapsychedelic paintings have always been compelling – the sort of works that reward long and close perusal – but now the woman's gonna go all narrative with them, too? Her series about childhood memories of deer (and of one deer in particular), presented with a live-music "crankie" show during the reception, is like an exquisite polychrome graphic novel just waiting to be compiled.

A version of this article appeared in print on December 20, 2019 with the headline: Top 10 Arts-Related Things I Enjoyed in 2019