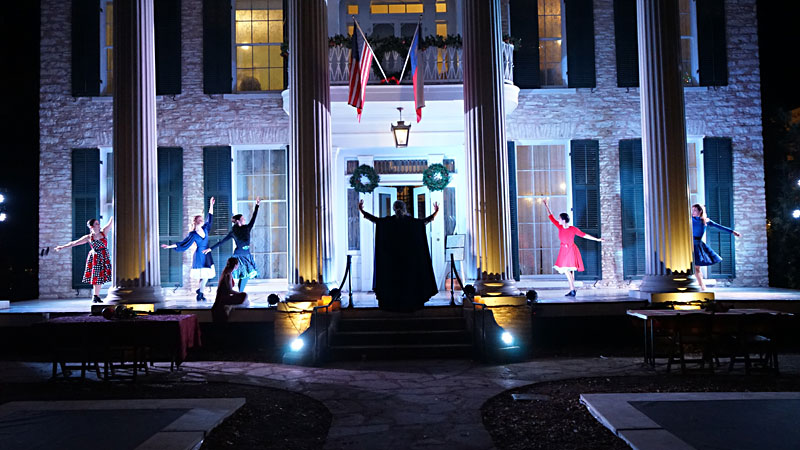 In a city of 1,000 Nutcrackers, with each trying to jeté its way into your holiday heart, creating one that stands apart from the crowd can be quite a challenge. But last December, Ventana Ballet leapt into the fray and managed, against all odds, to make a different Nutcracker. It wasn't just because of its name, taken from a part of E.T.A. Hoffmann's original tale that's not in the ballet. (Call it a prequel, a story-within-the-story explaining how the prince was transformed into a nutcracker in the first place.) And it wasn't just because of its use of The Nutcracker Suite by Duke Ellington and Billy Strayhorn; that jazzy reinvention of Tchaikovsky's score has been the soundtrack for Tapestry Dance Company's rhythm tap take, Of Mice & Music, for many Christmases. It was because of the chance it offered to dive inside this familiar work, to attend the party that kicks off the evening's adventure and take our own journeys to see cultures of faraway lands. The Watchmaker's Song let us in on the action – up to and including stepping out with Ventana's dancers.

Not surprisingly, the show was distinctive enough – not to mention appealing enough to a city that loves immersive experiences – that it found an audience. So Ventana has revived it for a sophomore run. As before, it's staged at the Neill-Cochran House Museum, the 1855 Greek Revival home in West Campus, where the front porch serves as a stage of sorts for Act I. Its Doric columns and limestone walls create the feel of a 19th-century opera house providing a program of traditional ballet, but most everything else sets us squarely in the middle of the 20th century. With the Austin Jazz Band delivering the full swing-era, big-band sound on the Ellington/Strayhorn score and dancers sporting retro fit and flare dresses, this could be a hop at the USO. (That feeling is boosted when dancers' classical moves give way to swing dance steps, and they invite lucky audience members to cut a rug and join a conga line.)

Granted, it's a long way from battling evil mice under the Christmas tree and taking a magic sleigh to the Land of Snow, but threaded throughout all this updated fun – and it is fun – are nods to the original ballet. Our young heroine – here named Marie as in Hoffmann's book – and the Nutcracker meet and fall for each other, with Rachel Culver and Atticus Griffin endearingly earnest and appropriately moonstruck; when they dance, they make their own beautiful music. We see the Snow Queen (Dorothy O'Shea Overbey, who also directed and choreographed the show, brings a regal elegance to the party) and Herr Drosselmeyer's dolls (Rachel Meador and Megan Dollar). All of this is overseen by our host, whose gray beard, blue-velvet hooded cloak, and sleep-inducing sweeps of his arm suggest D&D wizard more than watchmaker; but Navaji David Nava is hospitable in the role, and his fluid moves make him an engaging partner for other dancers. When he invites us into the house, we're inclined to follow.

Indoors is where the audience discovers a world of dance. Instead of The Nutcracker's dances inspired by different cultures, here are actual dances from different cultures, performed by local residents who really know them: Egyptian belly dance by Rania Kandil with Raks Saheeb, Spanish flamenco by Stephanie Keeton, tango by a duo from Esquina Tango, Irish step dance by a trio of students from the Irish Dance Center, and drag by Colleen DeForrest. Each dances in a different room, and the audience, divided into groups, moves from room to room for short sets. Despite the crush of bodies in the smaller rooms and, on the night I attended, timing issues that resulted in traffic jams as the groups moved, the setup allows the audience to make intimate connections with these cultural dances and their dancers – something one couldn't do with a traditional Nutcracker. But Ventana wisely doesn't ignore the beloved ballet. Its finale brings in the Sugar Plum Fairy (Ventana Executive Director AJ Garcia-Rameau, all grace and enchantment), joined by the Snow Queen, Marie, the Nutcracker, and the Watchmaker, all dancing to Tchaikovsky – and all at arm's length from the crowd. To be so close to something you know so well from afar is to see it anew. It is magical, and in a way that is all this show's own.

A version of this article appeared in print on December 20, 2019 with the headline: The Watchmaker's Song