Dave Steakley's musical version abounds in great voices, but it may drown out Dickens with songs 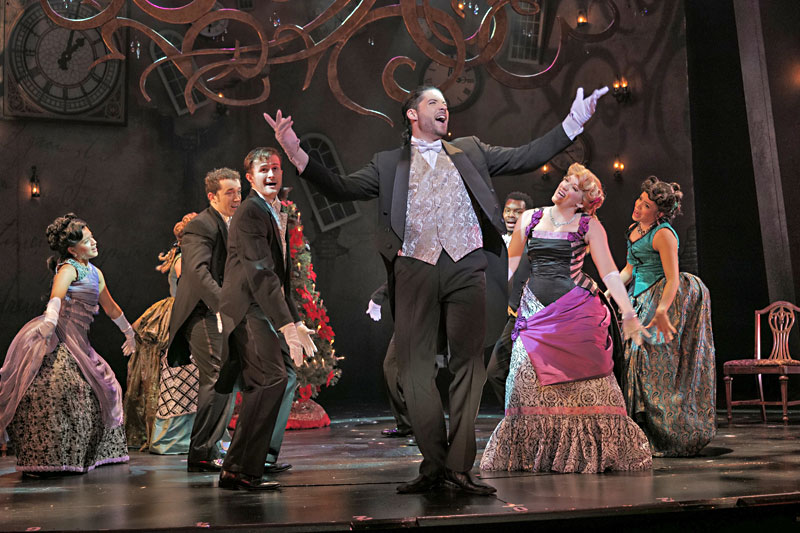 There are two types of people in this world: those who prefer sugar plum fairies leaping about at holiday times and those who are squarely Team Scrooge. Having grown up with the annual black-and-white version on TV and later, the delightful Muppets rendition starring a curmudgeonly Michael Caine, I've always loved A Christmas Carol best. The Dickens novel is all but perfect, too. Let's call it the original Nightmare Before Christmas, where men are haunted by visions of their lesser selves but reminded that, with the right choices, the future is as malleable as fresh snow.

What could possibly be missing?

Luckily, Zach's original musical version is permeated with strong voices, who are more than capable of pulling it off. There's the raspy powerhouse Mary Bridget Davies (Ghost of Christmas Present/Mrs. Gilchrist), bringing us to church like the love child of Aretha Franklin and the unsinkable Molly Brown. There's the ethereal altar boy tenor of Paul Sanchez (Bob Cratchit) and his operatic "O Holy Night." There's Roderick Sanford as Marley (and other characters too numerous to name) and his booming baritone, filling the four corners of the stage; Kenny Williams (Ghost of Christmas Past) and his infectious, Mama Ru sashay; and, my favorite voice of the night, Michael Valentine's clear, beautiful sonority as Fred, the fine nephew even Scrooge can't fuss with.

A bevy of glorious voices in an energetic cast, having a ball up there, and believe me, they earn it. If this Christmas Carol has a hole in its stocking, it's that there are simply too many songs and the poetic precision of Dickens' words are lost in wall-to-wall musical numbers. Think of the delicacy of the story's first line, "Marley was dead to begin with." Or Scrooge's rejection of his partner's ghost as mere indigestion: "There's more of gravy than the grave to you." Now, stir those up and put them in the pudding with Madonna's "Holiday," Kool and the Gang's "Celebration," Jessie J's "Price Tag." Even a recent drop from Lizzo made it in – in a scene already overstuffed like the holiday bird.

The burden of selection lies squarely on the adapter: director and Zach Producing Artistic Guru Dave Steakley. Sometimes Mr. Steakley, less is more. My Christmas wish is that instead of four songs to emphasize every masterfully conceived plot point, we had but one that illuminated what Dickens has already done so well, that Zach had given us a tale rich with intrigue and darkness and revelation and light without even once overdoing it.

Not wanting to be a Scrooge, I took my mother along with me. I heard her exclaim as I drove out of sight, "Don't give that show a bad review!" She loved every last minute of it, right down to the Act I close, an Avicii-style rave with smoke, flashing lights, and glow sticks. Some prefer balletic mice and some like their Dickens intoned to them by a warm fire.

God bless us, every one.

A version of this article appeared in print on December 20, 2019 with the headline: A Christmas Carol