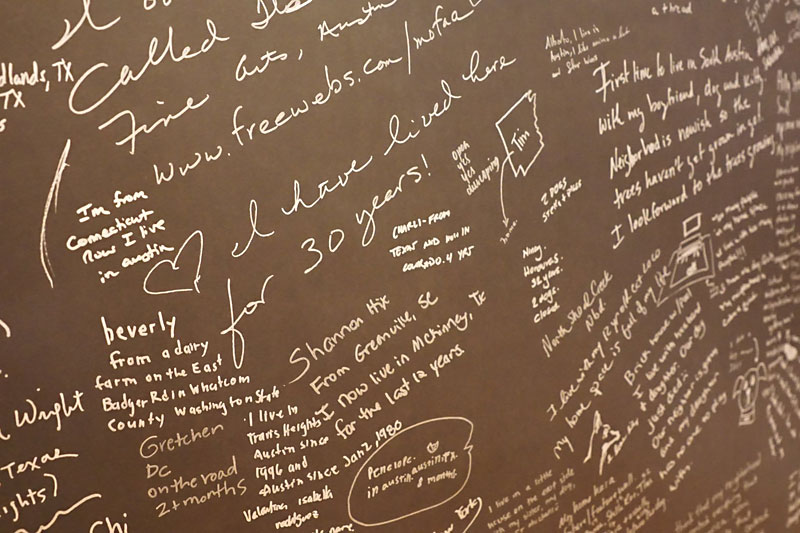 Rehab El Sadek, the city of Austin's first Artist-in-Residence, she of this past summer's "Memory Palace" exhibition at Big Medium, in which she externalized – via sculptural installation and objects of many layered textures – sections from her mind's matrix of personal history in the Middle East, is currently occupying the Eastside's Prizer Arts & Letters Gallery with her creations in a show called "Transient."

"El Sadek meditates on residential spaces and our relationship to them and to each other," explains the show's statement. "Visitors to the gallery will be invited to contribute to the show by adding their own reflections on home."

That first part is what welcomes you to the Prizer space, with its recontextualized building materials seeming like chunks of flesh excised precisely from the infrastructure of a city in progress, smears of thick wall-coating plaster roughly fronting blackened shelves held up by table legs of lathed wood, choice cuts from some meatropolis now presented in a minimalist butcher's display. Raw wood, too – bare branches of trees and whole saplings denuded of foliage – leaning against the walls, among these evocations of urban industry, adding a touch of nonhuman nature to the stark, whitewashed vestibule.

Enter the hallway next and peruse the photographs along both walls as you go: Black-and-white images captured by the artist, building up a sense of place, or at least the idea of a distinct place, via the accumulation of details and the cohesions of subject and framing. Here are icons of the architecture through which a person has moved in daily life, akin to how a viewer has just moved through El Sadek's city-excerpting vestibule.

And, at the hallway's end, a small room painted black, offering what's promised in the second part of the gallery's exhibition note: The contributions of visitors. But it's not just a bunch of notecards on which you're invited to write your impressions of the show. No, you're prompted to answer a series of questions, to share your own relationship with residential spaces: Where are you from; what was it like there; why did you leave; what brought you here; how long have you been in this place; and so on. But, again, no typical notecards or visitors' logbook: Fine-tip markers of white ink are provided, and so everybody's been writing their responses on the black walls themselves, and thus those walls have become another part of the exhibition, a floor-to-ceiling surround of alphabet-patterned visuals. But now you're also standing, as one does in any residence and especially in the people-dense environment of cities, within all those lives (here, within the textual recordings of those lives) that have been there before you, that are, even, concurrent with your own.

For however long that situation – your visit to this exhibition, your sojourn in this city, your days upon this earth – might last.

We've left places; we've moved to other places; and we may not, so to speak, be in Kansas anymore. But wherever we're living, there's a wind that seldom ceases to whisper among the bones of the complex structures we've built to contain us. And all we are is dust in that wind. "Stella Alesi: Journeying" at Prizer Arts & Letters
The artist extends her protean skills toward the bold and minimal