Like the separate parts of the Creature's body, the technical and performance aspects unite to create a delightfully provocative production 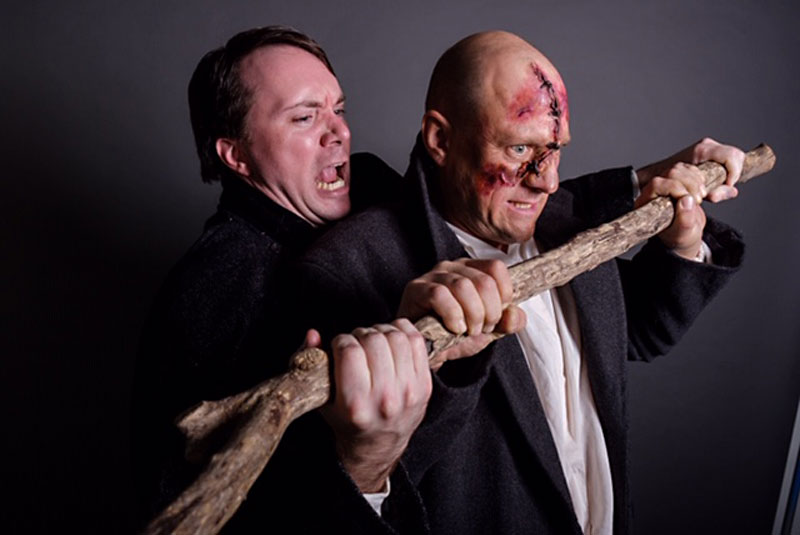 As a theatergoer, I'm a sucker for an immersive atmosphere (i.e., the unique environment created onstage when a show's visuals, sound, and performance come together). Obviously, it's my job to keep an eye out for this cohesion (or lack thereof), but every so often, I'll sit through an experience so striking that if I could capture it in a bottle and keep it on my desk for inspiration, I would.

Even if you've never read Mary Shelley's classic tale about the perils of playing God, you're likely acquainted with Frankenstein's story. Considering images of mad scientists, slow-moving monstrosities, and flashing lightning are burned into our collective horror consciousness, Different Stages had its work cut out for it when bringing an inventive adaptation of Shelley's novel (penned by Patrick Sandford) to the Vortex stage.

While Ann Marie Gordon's set is indeed modest, it'd be inaccurate to call this staging "minimalist." Echoing the script's themes of wanton creation, Gordon's design (bare save for a raised platform and some steps) acts as a canvas for technical design to violently fill with life. Quite impressive are video designer Lowell Bartholomee's digital projections splashed across Frankenstein's backdrop. Several recent productions at the Vortex (such as Ethos Theatre's :Humpty) have proven how powerful a tool projected visuals can be for theatrical world-building, and Frankenstein continues that trend. Whether it's a heavy snowstorm on an Arctic sea or flashing images of human anatomy, Bartholomee's eye-catching designs create foreboding imagery without being distracting.

Aiding these visuals are the deliciously off-kilter compositions of actor/sound designer Kevin Mayes. Throughout the show, the bright pings and pongs of his synth-heavy soundtrack seem to ricochet off the theatre's walls, accompanied by disembodied voices sporadically moaning to our protagonist – all of which join to set a jauntily macabre tone.

Tying this uneasy world together are the performances. Different Stages Artistic Director Norman Blumensaadt has an ability to imbue his actors with a fresh reactivity. As a result, the company's productions often feel rich with spontaneity. Fittingly, Frankenstein's beating heart is Samuel Grimes' Creature. The actor brings this iconic monster to life not with lumbering physicality, but by delivering Shelley's words with such pain and stress – inspiring flashes of empathy constantly at odds with the heinous deeds he commits.

His deeply grounded performance stands in contrast to Travis Williams' wonderfully over-the-top portrayal of Victor Frankenstein. Williams' wide-eyed eagerness to play God gives the first act an infectious energy. When faced with the horror of his own creation, however, Williams builds off Grimes' energy to plunge Victor into overwhelming shame and regret. Williams and Grimes match each other in the urgency of their performances, building a volatile dynamic piece by piece until it topples over magnificently in the climax.

Like the many separate parts that form the Creature's body, Frankenstein's technical and performance aspects unite to create a delightfully provocative evening of theatre. I was left with the impression that everyone involved with this production took a certain amount of pride in it, as what I saw onstage was a satisfying testament to what happens when a cast and crew work as one to bring a multifaceted yet cohesive vision to life.