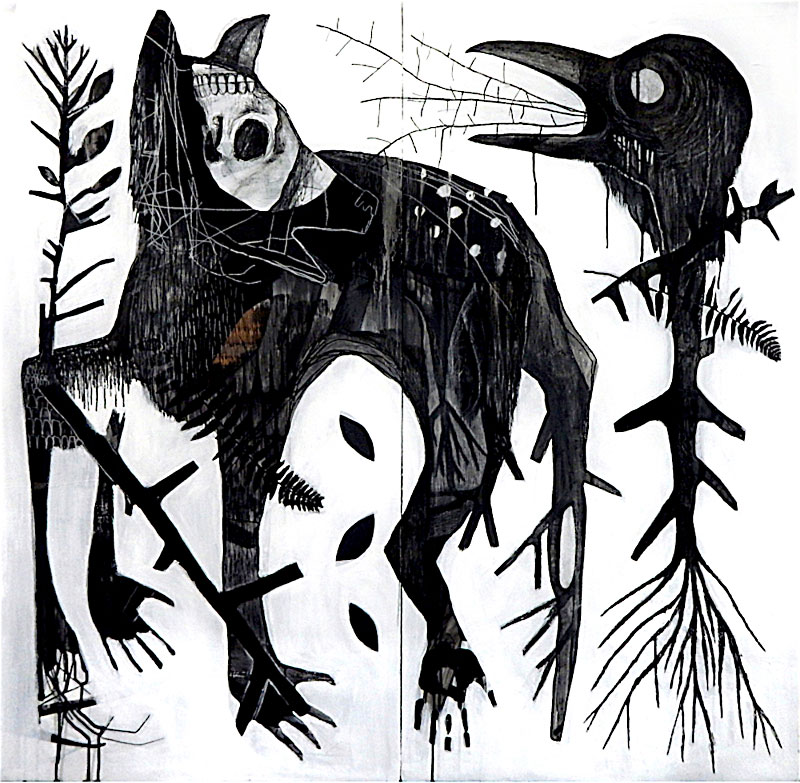 No Protections by Jesse Narens

Thanksgiving's been and gone, and now here come all those more industrial-strength winter holidays. That tends to mean, here in the U.S. of A, that everything's gonna be festooned all bright 'n' cheery, especially up and down every boulevard that trucks in retail therapy – and that goes double, we reckon, for a popular socializing-and-shopping strip like South Congress Avenue: Santas and bright-eyed elves and peppermint-flavored tinsel and enough hypersweet gewgawry to send a Type 1 diabetic into the ICU.

Citizen, join with me in thanking the outsider-art champions at Yard Dog, because they've done just that: embraced the darkness. The newest exhibition at the Southside bastion of what's located at the intersection of DIY and brilliance is called "Creak, Crack, Creep." It's a show of work from Portland's Jesse Narens, a creative autodidact with a distinctive perspective on what's around him and the talent to express his darkling visions as art that "often [reflects] on humanity's tumultuous relationship with nature and personal transformation."

Black on black, gray on black, black on white, white on gray on black: a thick progression of stuttered monochrome rendered in acrylics and graphite and oil pastels on discrete wooden panels. "With no attachment to preconceived ideas," says the artist's statement, "pieces begin without sketches, and seemingly finished works may continue on and be layered over at any time." Portraits of wild beasts and woodland creatures, built up with relevant imagery and personal symbology incorporated into their sepulchral meatus. This art is creepy as hell, yes, like something created by a Stone Age shaman anticipating the works of Hieronymus Bosch while infused with psilocybin and daubing chalk, transcendent, on the rough walls of an obsidian cave. Primitive and stunning, these images, even when complicated by a depth of layers and patterns.

Santa? That jolly old elf is cowering behind a stalagmite, pretty much scared shitless, because he's glimpsed something of this same primal darkness in Blitzen's eyes on a winter's afternoon, and he's learned to tread softly indeed, lest reindeer games turn suddenly mutinous, the familiar sleigh team become a ravening crowd of ungulates with bloody Kringle-mayhem in mind.

For which brief respite from holly-jolly-whoop-de-doo, we give thanks to Yard Dog and Jesse Narens this holiday season. 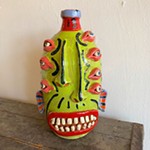