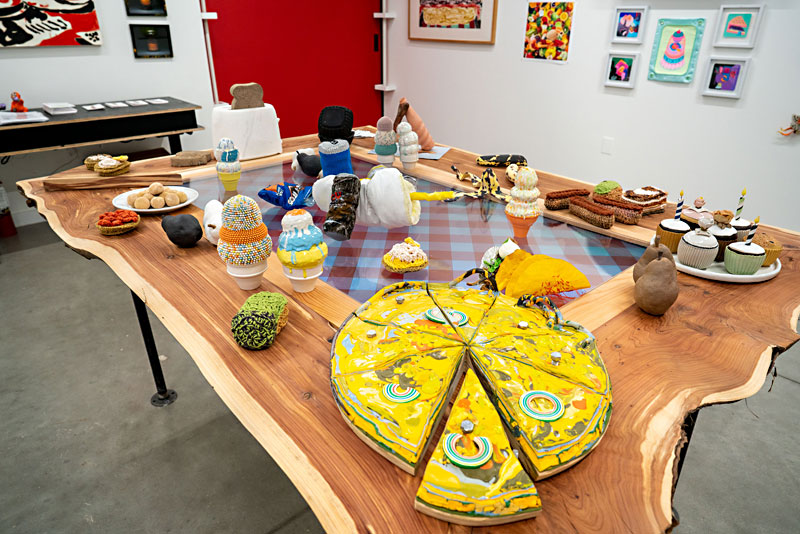 Come Thanksgiving, you may feel you've had all the food you can handle, but there's a feast in town too delectable to pass up, and I swear there's not a single calorie in it. Titled "Texas Toast," this spread was cooked up by Co-Lab Projects' chefs de galerie, who figured that, with their Springdale General space being neighbor to a number of drinking and eating establishments, a food-themed exhibition was in order. So this fall, they put out a call for art related to food and cannily timed the show for a period when we are extraordinarily fixated on the stuff we stuff ourselves with; it would open the day after we'd all overdosed on the sugary treats of Halloween and close just as we'd emerge from the Thanks­giv­ing food coma. (The run has since been extended through Dec. 21.) Co-Lab Director Sean Gaulager and crew weren't sure what kind of response to expect to the call, but it turned out to be like the surfeit of dishes at a holiday potluck when all of your relations show up.

The playfulness in so much of the art is a large part of what makes “Texas Toast” so toothsome, but the show is no mere snack, devoid of nutrition.

Indeed, with all the work displayed, the Co-Lab gallery may remind you of your own house when you see that parade of potluck dishes come through the door, i.e., too small to handle all the casseroles and sides and desserts brought by your guests. But just as you somehow find room to squeeze everything in, Gaulager and the Co-Labbers have jammed more than 50 artworks into their 400-square-foot gallery. The pieces are hung two and three deep on the walls, with more than a dozen petite three-dimensional works – think amuse-bouches – laid like an actual banquet on a table built expressly for the exhibit by Gaulager. Its wavy edges and cedar tree rings would make the table an exquisite object on its own, but the masterstroke about it is that it's also a frame, with a large video screen in the center where images of checkered tablecloths – the kind you'd see in diners all over the state – flash by. (Artist Adrian Aguilera calls the loop Su mesa esta lista / Your table is ready.)

Naturally, a show titled "Texas Toast" is bound to have works inspired by the state's tastes or outsized nature, and sure enough, Cedric Ingram takes us right to Big D with State Fair Staple, in which animatronic Big Tex gives fairgoers his signature stiff howdy in the painting's lower half while in the upper half, a hand juggles two missile-sized corn dogs garnished with mustard. Beside it, Rebecca Marino gives a witty tip of the astronaut helmet to Mission Control and the golden anniversary of the first moon landing with Lunar Meal A – bacon squares, peaches, sugar cookie cubes, pineapple grape­fruit drink and coffee (July 21, 1969), a photograph that depicts those foods in the small compartments of a blue plastic tray with the liquids to the side in clear plastic bags with straws inserted, all set neatly on a TV tray as if ready to be consumed while watching Star Trek. On the adjacent wall, our town gets a tweak in Matthew John Winters' Austin Dog, a print advertising the "Austin Style Hot Dog" with a frankfurter nestled in a taco shell and coated with chili, lettuce, tomato, and shredded cheese. (More tempting is Brenda Armistead's Tacos to Go, six winged tacos arranged along the walls at varying heights that, despite being stone and porcelain, look truly tasty!) And lest we forget Texans' road-trip pit stop of choice, Alexis Mabry has made a soft sculpture of a large Buc-ee's soft-drink cup – replete with toothy mascot – surrounded by soft re-creations of products you might well purchase at the colossal convenience store: a bag of Doritos, Busch beer cans, and, because this is Texas, a can of Lone Star. 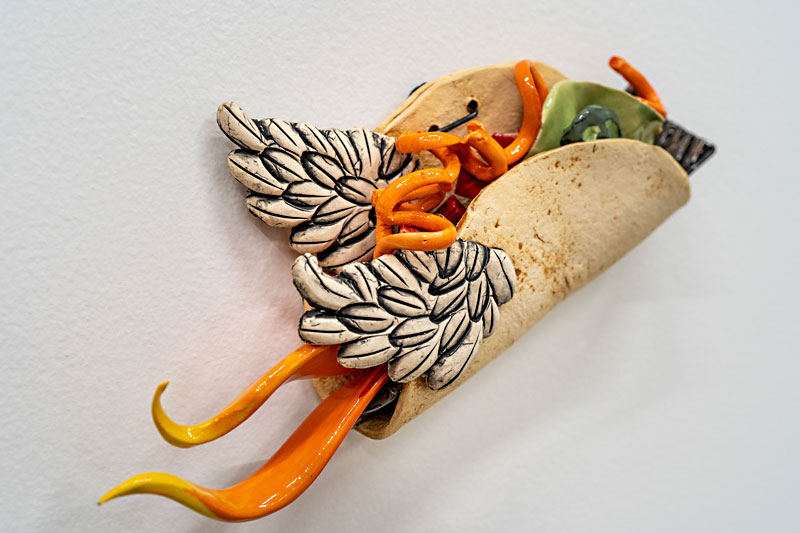 Certain works boast a Texas vibe just by virtue of their size. Chief among them is Zeke Brill's papier-mâché pickle that is as big as a harp seal and emblazoned with the slogan Woody Guthrie stuck on his guitar: This Machine Kills Fascists! (It convinces you that if any pickle could, it'd be this one.) Then there's Drew Liverman and Veronica Giavedoni's Premiums, two saltines that could pass for sofa pillows, only the artfully applied brown paint and spot-on spacing of "holes" mark them as the toasted friend to everyone who ever needed a nibble while nursing an upset tummy. But those are outsized facsimiles. The big lollipop of Edmond Blake Heusner's I'm a sucker for thinking I could love you is the real deal: made of corn syrup, sugar, and vegetable dye. Its shiny amber surface might draw you in for a taste, but look before you lick: That sucker has a life-sized human face, and running your tongue along it could prompt all sorts of associations beyond candy on a stick.

The sly humor and subversion at work in Heusner's all-day-and-all-night sucker can be seen throughout "Texas Toast." Whether or not artists are playing with scale, they're wryly commenting on our ties to food by what they make and what they make it with – turning the soft hard, as with Cheyenne Weaver's squishy-looking bananas that are really ceramics or Suzanne Wyss' pizza constructed of plywood, steel, and mega jawbreakers; or not changing it at all, as with Iva Kinnaird's Burnt Toast, a mounted slice of ... burnt toast (a work that can be yours for $100). Jacqueline Overby serves a trio of ice cream bars (in three stages of consumption) made of wool, while Valérie Chaus­son­net offers a variety of pastries in yarn – making them no less lovely in appearance but casting the issue of mouthfeel into question. And if you wondered what it would look like if an avocado seed was replaced with a ball gag, well, Cecilia Yakin shows you here. 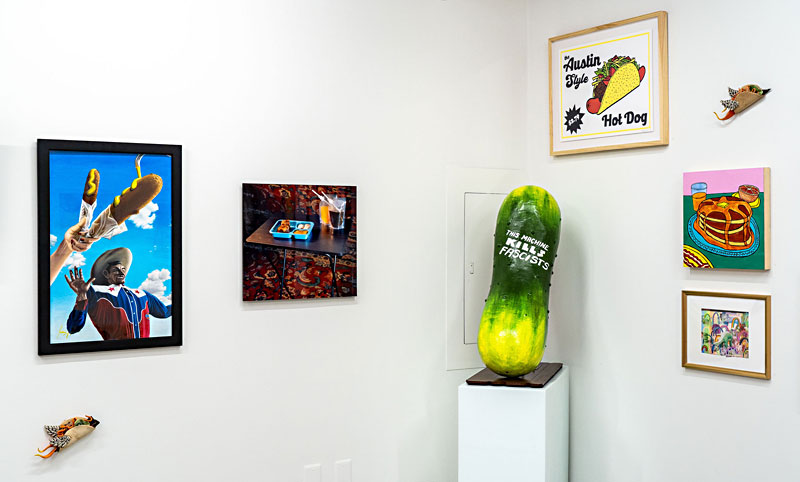 The playfulness in so much of the art is a large part of what makes "Texas Toast" so toothsome, but the show is no mere snack, devoid of nutrition. You can sense in many works a personal tie to the food represented – even things often pejoratively dismissed as junk. In the hamburgers, the corn dogs, the chips, the sweets, and the beer, just as in the fruits, meats, wine, and soups, the artists have made visible investments of themselves. Cupcakes may be just cupcakes, but look at Andrea Magnus' Happy Birthday ... a little something for everyone!, and the care taken with these seven ceramic versions jumps out at you – the details in the wrappers, frosting, and candles reveal how much this food means to Magnus. Peanut butter and jelly doesn't get much respect in the sandwich world, but Rachel Gibson's PB&J, a sweetly simple still life of two halves of a sandwich on a pink plate by a glass of milk, accords it some – and conjures for many of us comforting memories of numerous such sandwiches wolfed down in childhood.

In the end, that may be what's nourishing – or at least satisfying – about this Co-Lab exhibit: It celebrates our bonds to food and comfort. Throughout our lives, certain foods soothe us, restore us, in ways that few things can, and the sight, smell, and taste of them open doors to our past. It doesn't matter if it's Texas toast or Proust's madeleine, we are what we eat, and this show puts us back in touch with that truth with joy.

A version of this article appeared in print on November 29, 2019 with the headline: Happy Meals 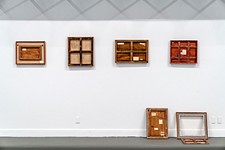 "David Culpepper: That's Not Going Anywhere" at Co-Lab Projects
The show is welcome to hang around, but this artist is going places