This staging of the hit musical blends the old and new, petticoats and punk, with a power and seductiveness that enraptures 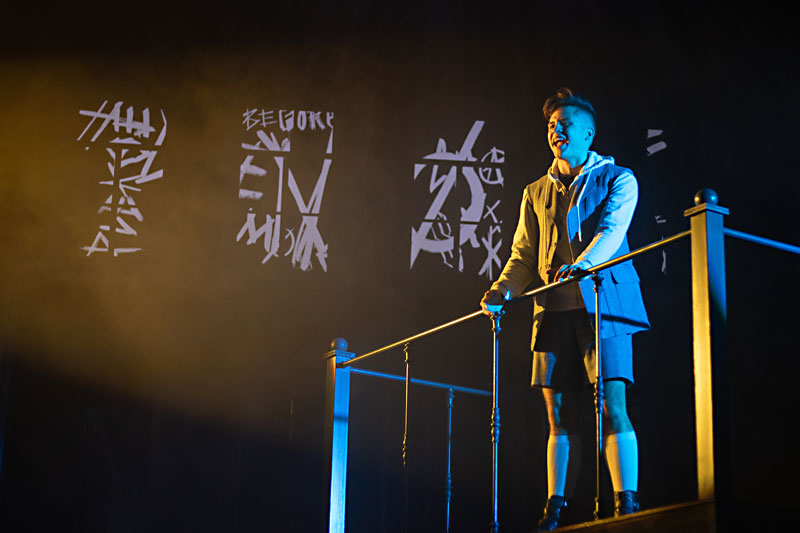 In the opening moments of the UT Depart­ment of Theatre & Dance production of Spring Awakening, 14-year-old Wendla (a starry-eyed Savanna Cole) lays her head in her mother's lap, begging to understand the facts of life. The time being what it is – the end of the 19th century – and parents being what they eternally are – uncomfortable – her mother (Juleeane Villareal) fittingly drapes part of her dress over Wendla's head, shrouding her in darkness. She lies. Young Wendla remains naive and innocent, even as her body is hellbent on its own true awakening.

Wendla is not much different than her friends Martha (Adara Felix), Ilse (Lea Donnenberg), Thea (Frances Garnett), and Anna (Deja Criston). Their male age mates, while schooled in Latin and history, are also mostly uneducated in the ways that count. Young Moritz (Pedro Antonio Castañeda) mistakes a nocturnal emission for a nightmare. Only the scholarly contrarian Melchior (Jeremiah Abdullah) knows different. He essays for Moritz the wonders of human anatomy, drawing revealing pictures in the marginalia that invade Moritz's dreams still more.

Steven Sater and Duncan Sheik's musical is almost a direct retelling of Frank Wede­kind's fin-de-siècle play of the same name, written at a time of fashionable pessimism, rejection of the values and mores of the older generation, and the growing allure of bohemian self-expression. In short, it was written during a time that shares much in common with today's apocalyptic ennui. Sater and Sheik (a former Nineties pop star) updated the script with lyrical folk rock, although it was already appropriately risqué, tackling taboos like teen pregnancy, physical abuse, and rape. After its debut, Spring Awakening went on to receive multiple Tonys, an international tour, and a revival in 2015.

Them's the facts, but the facts tell little about the power and seductiveness of this production, directed by Anna Skidis Vargas, and its young ensemble.

First, envision Tucker Goodman's set, a double-level open cage with a winding stair and the orchestra on the upper level set behind and in back. From their perch deep in the wall, the sounds of the cellos and guitars drift down across the cast, bathing them in Sheik's moody minor chords, which occasionally resolve in even murkier color.

See the students in Steph­anie Mae Fisher's impressionistic pastel-and-gray costumes. Then, the students themselves: fresh-faced, fully committed, not much older than the adolescents they represent. When they sing together an anthem to sexual frustration ("The Bitch of Living") or being caught red-handed ("Totally Fucked"), they transmit the pent-up rage of all generations their age. When coupled up, they sing the haunting refrain of first love that will no doubt wound and sour ("The Word of Your Body"), and we sigh right along with them at a pain more inevitable than death.

UT's Spring Awakening powerfully blends the old and new, petticoats and punk, wrought iron and flashing projections. Sater's poetry illuminates Wedekind's plot and, thanks to an apt and nubile cast, enraptures. I highly suggest letting this production bruise you; let it be your bruise. Remember once again what it's like to be ignorant and innocent and hopeful and alone.