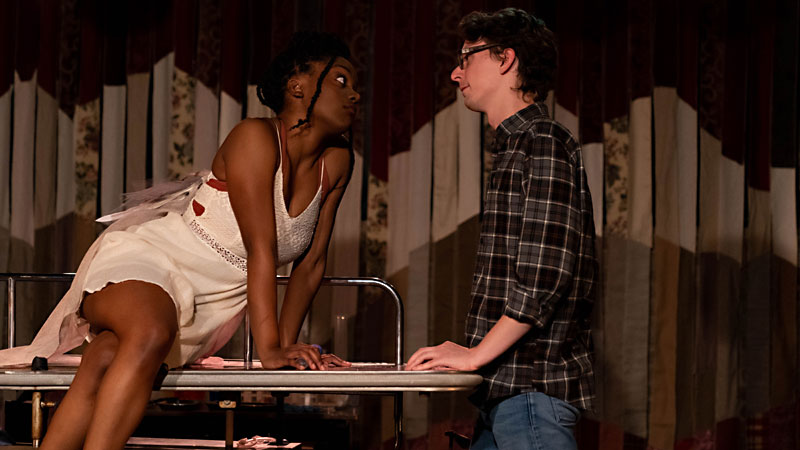 Art doesn't always lend itself to easy con­clusions – and that's okay. I, for one, enjoy exploring abstract work for satisfying, concrete takeaways. But at what point is the need for obvious (or forced) answers detrimental to our experiences as readers/viewers/audiences? (*cough* J.K. Rowling retconning Harry Potter on Twitter *cough*) Art doesn't always benefit from being placed in a box or explained to death. Sometimes you need to stew in its complexities to let your own conclusions ferment – all the while fighting that knee-jerk reaction to ask, "Yeah ... but what's the right answer?"

In attending Heartland The­atre Collective's production of The Vineyard, I had the opportunity to take this self-­reflect­ive approach. Written by Nicole Oglesby and directed by Marian Kansas, this provocative new work gradually adds layers of sci fi and horror onto a deceptively simple premise. The story follows stressed-out twentysomething Joan (Ros­a­lind Faires, Chronicle contributor and daughter of Arts Editor Robert Faires) as she moves to a vineyard and meets four other misfits who are there forging both wine and friendships. Things complicate when the vineyard owner (Will Gibson Douglas) reveals an interest in body-modification surgery (or "trans­humanism") and begins experimenting on his friends in ways that reignite past traumas.

The presentation strikes a delicate balance between fantasy and realism, teasing both but never committing to either. Though the script deals with heavy subjects (suicide, inequality, mental health, etc.), their treatment isn't ham-fisted; instead, they play their own natural role in the narrative, and the world that Oglesby creates feels richer for it. Adding to the show's freshness is its use of body horror, a genre that has historically been underexplored onstage. Even without blood or special effects, moments of reckless bodily mutilation create the same squirm-in-your-seat feeling as big-­budget gorefests – because the cast sells it.

In fact, the production's dramatic weight rests squarely on its five outstanding cast members who, like the Planeteers to Captain Planet, each bring something integral to The Vineyard's greater whole: Brennan Patrick brings a heart-on-his-sleeve genuineness, Brooke Ashley Eden a deep-seated pain, Faires an infectious curiosity, Douglas a complicated selfishness, and finally, Khali McDuff-Sykes a flawed yet irresistible energy that binds the ensemble together.

Ultimately, so much between these characters goes unsaid, communicated instead by a tangible electricity that crackles between them. It's these individuals' messy five-way chemistry – a hypnotizing clusterfuck of love, anger, and betrayal -- that makes The Vineyard a complete experience, even when the script leaves much in the way of questions

Heartland's latest is a piece I encourage people to see, simply because of the conversations it can inspire. So much thought has gone into creating a show that allows audiences to draw their own conclusions that frankly, it feels irresponsible not to. During the talkbacks, the cast was predictably peppered with "what did X mean?" questions. At one point, Douglas turned the question back on the asker: "What do you think X meant?" Following a moment of silence, the audience member's personal insight proved far more valuable than anything the cast or crew could have come up with for them.

Therein lies The Vineyard's effectiveness. It's a production whose themes and takeaways transcend the limits of its minimal set, small cast, and cramped performance space to become a larger, more complex whole. To me, such an experience is worth walking away from with more questions than answers.

A version of this article appeared in print on November 8, 2019 with the headline: You Figure It Out