Because we could all use a little more aesthetic exorcising, couldn't we? 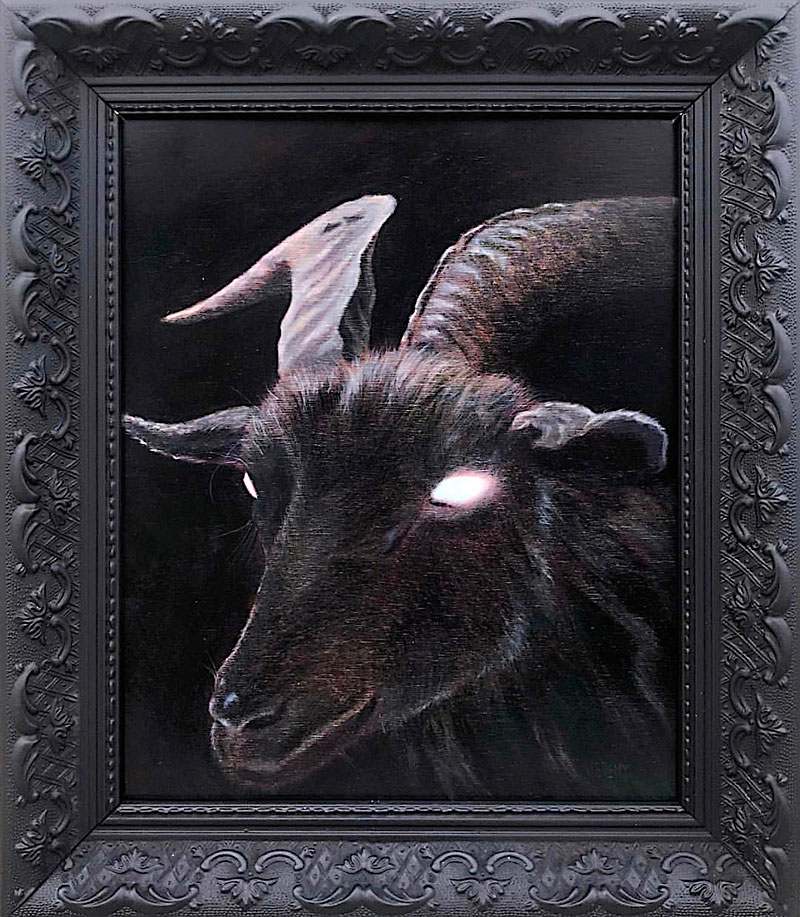 The Black Goat of the Woods by Jeremy Burks

Their name is Legion, for they are many: the outer incarnations of humanity's own inner monsters, the imaginary creatures conjured to serve as scapegoat for all the evil that men and women and, sure, sometimes even nonbinary people do. We're still living in a demon-haunted world, as Carl Sagan warned in his bestseller of 1995, still navigating a social matrix shot through with superstitions held over from our paleolithic days. But for artists, whether they subscribe to any faith-based actuality or not, such things are also – as all things are also – grist for the creative mill.

The fabled desecrants of antiquity may be many, but in the latest show at Recspec Gallery, they're represented in more easily encompassed numbers, their striking personae bound to the pristine walls or manifested three-dimensionally by artists who are offering some delightfully unholy work in this new chapel of design.

New, yes, because Recspec had to vacate its former Eastside premises in Flatbed World Headquarters months ago, when that whole compound was snuffed out by gentrification's money-dripping meat hooks, and has only now returned, phoenixwise, in a new space south of the river – and just a little way down the road from the various delights of The Yard.

The opening reception this past week was a celebration of the gallery's rebirth in a bigger, better space, and of what can be rendered by way of illustrating the darkling denizens of Hell. If you missed that party, you can still see the show (although your experience of it won't be enhanced by the percussive power of Thor & Friends and the C Thornton Band, both of which brought sonic storm and structure to the opening) on Saturdays through December 14. Here, you'll witness art curated by Laurel Barickman and Katie Cowden, gathered as a sequel to Recspec's popular "Witches" show of 2018. Here, you'll see what 18 creators from Texas and beyond (read: New York and Oregon and Pennsylvania) have in mind when they're contemplating the Adversary and his minions.

"Beelzebub has a devil put aside for each of us," say the exhibition notes, "and we are asking our artists to show us what that looks like to them." Thus, Aaron DeGruyter's Pandaemonium, presenting as a sort of lucha libre devil mask; Jeremy Burks' portrait of The Black Goat of the Woods, its eyes glowing with cold soulfire from a baroque black frame; the infernal flash art from Stacey Martin Tattoos; the equine and alchemical symbology of Henry Hablak's The Summoning; and, oh, much more – and all so horrifyingly demonic, it seems, that the show's promotion has been banned from Instagram and Facebook. Could it be that the letters Z-U-C-K-E-R-B-E-R-G can be kabbalistically reconfigured into A-S-M-O-D-E-U-S (aka the Prince of Demons) or something equally abominable? You may never know unless you pilgrimage to Recspec for a look-see soon, citizen. A close look-see, of course: The devil is sure to be, as ever, in the details. 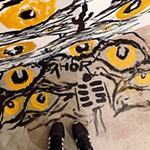 "Exquisite Corpse" at Recspec Gallery
Dying is an art; at this gallery, they do it well