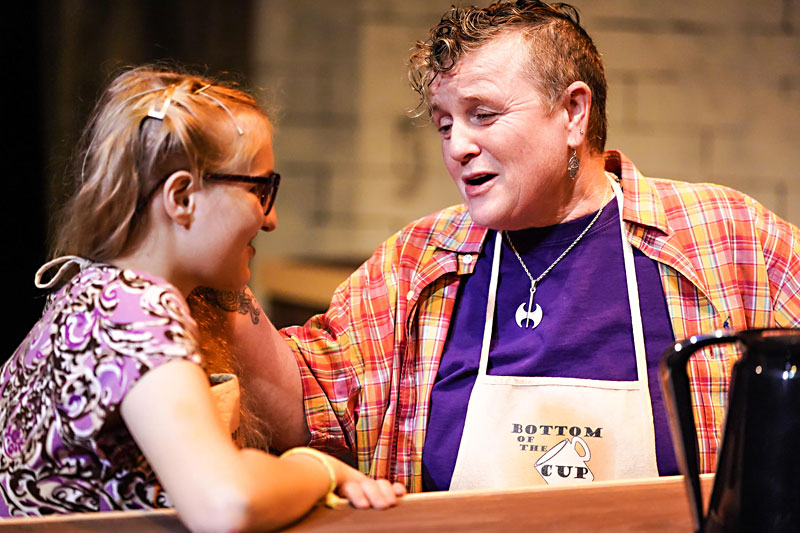 Claudia Chibib as Pandora and Nano Boye Nagle as Theo in Pandora: Life Outside the Box (Photo by Dave Hawks)

You remember Pandora, yes? That unfortunate miss of myth who couldn't keep a lid on her own curiosity or on the box given to her by Zeus, thus unleashing on the world every evil from simple deceit to catastrophic war?

Well, it turns out that there's much more to her story than that, as can be learned from TILT Performance Group, which has just unleashed upon the world a new musical as full of goodnesses and joys as that ancient box was stuffed with miseries. Pandora: Life Outside the Box takes what has always been one of those downer tales explaining why bad things exist (see also Garden of Eden, Eve, apple) and counters its gloom with the light of humankind's better qualities: compassion, concern, friendship, generosity, solidarity, humor. Oh, and the one item left in Pandy's box after all the ills escaped: hope.

Now, you might not expect such upbeat attributes from the misfits peopling the stage at Ground Floor Theatre. After all, their greeting to the audience in the opening number is "Welcome to the Bottom," a reference to both their downcast lives and the doleful coffee shop they frequent, the Bottom of the Cup – slogan: "Possibly the worst coffee in town!" But give these woebegone joes and janes a little time. When they encounter someone else truly in need, you'll see them rise to the occasion and do for others what they might not be able to do for themselves.

Case in point: Dora – short for Pandora and a descendant of she who opened the you-know-what. Dora has just inherited the you-know-what and been approached by a gent in a jacket of dazzling red sequins who offers her a proposition: Face five challenges involving evils that escaped from the box and win just one, and all of the evils will go back in the box, leaving humanity forever free from hatred, war, discrimination, disease, death, etc., etc. Lose them all, though, and this sparkly stranger gets Pandora's box – and the hope that remains inside – to do with as he will. It's a challenge right out of mythology – monumental, heroic, with the fate of the world hanging in the balance – and despite the epic risk, this hapless, high-school-age barista resolves to take it on.

What follows is less like an Amazon queen battling Hercules and more like Rory Gilmore in a match with Alex Trebek – a devious Alex Trebek. See, the challenges take place in a game show, replete with questions, buzzers, and schlocky announcers – one of many clever comedic touches built into the script by playwright/composer Allen Robertson. As with most of the musicals that he's created with Damon Brown for Summer Stock Austin (Rob1n, Tortoise and Hare, A Shoe Story, et al.), Robertson has updated a classic tale and given it an irresistibly irreverent spin. The contest's contemporary setting lets us see how those vices "released" in ancient Greece play out in this country today, with their excesses exposed and skewered by satire. (We get to hear a politician musically gloat to his opponent, "While you've been out there pandering/I've been gerrymandering." And see Death, embodied as a hair metal rock god in a studded leather jacket and hellishly overpermed, Whitesnake 'do, dryly tell the audience, "See you soon," then point at one member and add, "You – very soon.")

Finally, though, Pandora: Life Outside the Box has less to say about vices than virtues. That scheming game show host, Zed (a coolly conniving Toby Al-Trabulsi) has stacked the deck against Dora, but he's still unable to defeat the powers of love generated by her community. They may be, as they say, at the bottom, but even there they can look out for one another and offer each other comfort. The gesture may be small – lending an ear to someone who's lonely, smiling at a stranger – but it can make a difference, as we learn in the tender, touching number "A Quiet Act of Kindness." "Kindness doesn't leave a visible scar like pain does," we hear, but it's no less powerful. It does inspire Dora (Claudia Chibib shows her vulnerability but also her resoluteness) and transforms the Bottom of the Cup into the cheerier Kindness by the Cup coffee shop, where the community stands as one.

That unity reflects the spirit of the TILT company, which consists of people who are differently abled and have special needs. Their experience as performers may vary – may vary greatly – but no individual is of less worth than any other. That's clear throughout the show, as staged by Artistic Director Adam Roberts, but never more so than when they join as one in the final anthem, "Love." To see them singing the word "love" over and over and over is to feel the wealth of hope still left in that box of old.

Pandora: Life Outside the Box

A version of this article appeared in print on November 1, 2019 with the headline: Pandorable 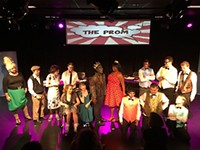