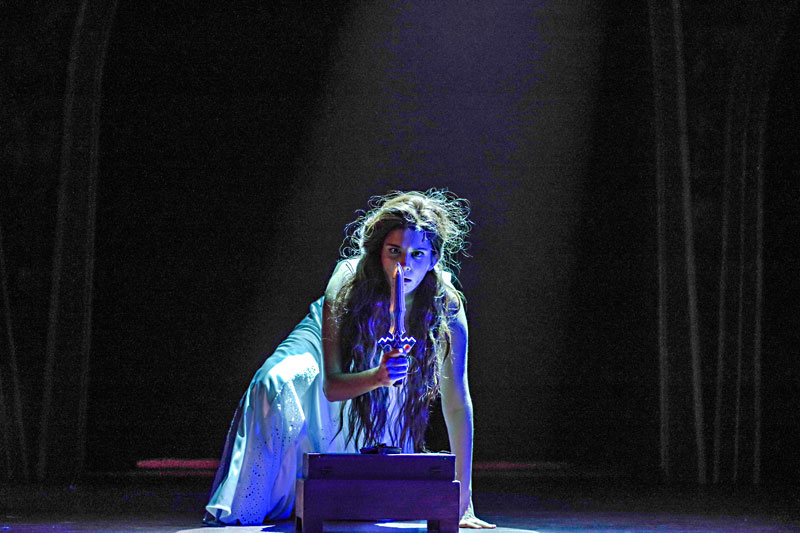 Considering that my familiarity with Bram Stoker's novel Dracula begins and ends with The Simpsons "Treehouse of Horror" parody, I was in an ideal position to have Zach Theatre's staging be my introduction to this terrifying classic.

Steven Dietz first adapted Stoker's tale for the stage in 1996, and to this day it remains October fodder for regional theatres nationwide. But now, he has revised his Dracula to place the count's would-be victim Mina center stage – absorbing the role of vampire killer Abraham Van Helsing. Given Dietz's deep understanding of what makes this story timelessly unsettling, his rewrite teases out new conclusions that, while wholly original, feel appropriate to the world Stoker created.

Completely intact in this rework are all the chills one would expect, however. Dracula's scary atmosphere doesn't come from its fog machines, flashing lights, or even the count himself, but rather from how the performers craft an onstage world that's increasingly threatened by the almost existential terror the villain presents. It'd make a great case of "show, don't tell" – but one can forgive this Dracula for showing anyway; its technical designs are magnificent. From the opening scene, it's impossible to ignore the hypnotic intricacy of Cliff Simon's sprawling set, upon which Helena Kuukka's provocative lighting creates fabulous illusions, silhouettes, and lightning strikes.

As grandiose as this technical production gets, though, there are moments where the Topfer Theatre is as deathly still as I've ever experienced it. When a character moves ominously toward a (possibly?) empty coffin or slowly pulls back billowing window shades, Dietz casts aside bells and whistles in favor of a quietness that imbues audiences with a heart-in-your-stomach feeling.

Inhabiting Dietz's world is a relatively small assortment of strong characters. Given her new importance, Mina now balances the role of straight-thinking everyman with that of a character increasingly discovering her own autonomy. In doing so with grace, actor Sarah Kimberly Becker makes Mina one of the more nuanced protagonists I've seen at Zach. In the titular role, Keith Contreras-McDonald displays untouchable confidence and flamboyance. While receiving little stage time, his disquieting presence is felt through crazed asylum patient Renfield, played by Charlotte Gulezian, who consistently steals scenes with her outlandish physicality and manic energy.

Ultimately, this Dracula is a wealth of strong performances and Broadway-quality technical design. However, while these elements shine separately, they're never quite integrated with each other. At times, an overabundance of canned sound cues distract from the events onstage, and lengthy scene transitions feel lengthier due to the set's size. Dietz's script creates a certain intimacy, which, to his credit, isn't lost amidst the thunderous sounds, strobing lights, and copious amounts of fog, but it isn't directly aided by them either. With the cast doing such an apt job of making Dracula's world a joy to get lost in, I can't help but think the show's dramatic weight would be heightened were it staged in a more intimate space.

Nitpicking aside, Zach's Dracula is entertaining. Considering how horror can be evoked as effectively by a well-told campfire story as by the startling visuals of a haunted house, it's hard to fault a show that delivers elements of both in spades.