This contemporary spin on The Bacchae shows how little the unjust treatment of women has changed in 2,500 years Dionysus in America, Jenny Pacanowski's reimagining of The Bacchae, holds many things in common with that ancient play. Like Euripides, Pacanowki is interested in the plight of women. She uses the same characters as the 2,500-year-old play: the god Dionysus (played here in cross-gender performance by Diana Guizado); Semele, his mother (Kimberly Bond); Pentheus, his cousin (the mesmerizing Bob Jones); and a chorus of his followers, known as the Bacchae, which include his aunts. The modern play also preserves the structure and language inherent to the original work.

But there are differences, too. Updated for current times, there are cell phones and Ubers; there is the TSA. Semele becomes a leader in the Iraq army, while her nephew Pentheus is a flag-draped, pussy-grabbing American general, leader of the free world, which through the Trumpian lens clearly ain't so free. To further the themes of chaos versus New World Order, audience members are given boarding passes, codified into class structures, with "A" class entering the theatre first. The production wants us to know that we live in a stratified, militarized land where foreigners are suspect and women are forced into roles that impede and obstruct them.

While I agree with the broader strokes, the play in close-up falls apart. Euripides looked around the world of ancient Greece and felt that women were treated abominably, which they were. But Pacanowski treats them almost as comic sketches. A woman, the chorus intones, is either a mother, a lover, a sister, or a daughter – nothing too revolutionary there. The way a woman is able to reawaken herself is to chant the name of a male god and, in Thinkery & Verse's production, listen to Yanni outtakes more appropriate for a shiatsu massage or lakeside yoga retreat. While some themes are interesting and worth exploring, in the end, it's not the women who experience justice or reclamation but the rejected god himself. Turns out he's truly pissed about being put out to pasture, so humans must pay the ultimate price. In the end – and I don't think this is any kind of spoiler after two and a half millennia – Dionysus entrances one of his aunts to behead her own son. He's a general who, granted, we won't miss, but the grief of his mother is palpable and certainly familiar to women. Am I missing how this is a redemptive, feminist tale?

T&V's production relies on what now feel like ancient tropes, made popular by Sixties-era experimental theatre: an interactive piece in the lobby; a silent, gyrating mime in the show's first 10 minutes; a loud and confrontational chorus, shouting mournfully or seductively into the audience. Dionysus in America had one too many "grab 'em by the pussy" jokes for my taste. (We get it! He's Trump!) The other lessons are also not new. Chaos begets chaos, and pride goeth before the fall. Especially if that pride belongs to an angry, spiteful god in need of redemption. 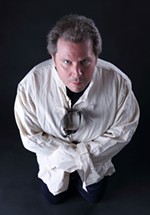