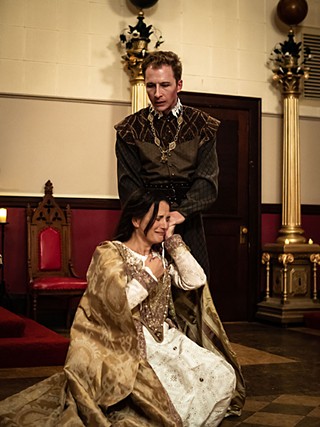 I was once chastised by an editor for too frequently using the word "authentic" in my pieces (in my defense, I was writing for Authentic Texas Magazine). I guess I'm just drawn to the fluidity of a word that can describe the quality of a five-star chef's cuisine as well as, say, the sincerity of a cheating spouse's apology. Unsurprisingly, I found myself needing this sort of versatility when discussing the Hidden Room Theatre's production of The Duchess of Malfi.

While I'd expect this sort of fully realized theatergoing experience from Austin's 2019 Cultural Ambassadors for Theatre, what impresses about Duchess of Malfi is that these intensively researched techniques together create a familiar human experience – one that proudly displays both historical and emotional authenticity (e.g., Karim-Cooper's gesture acting; it's these quick, primal moments of clean choreography that build on the dramatic base that the show's actors aptly lay down.)

Setting a strong foundation is actor Liz Beckham, who plays the demanding role of the Duchess with a graceful urgency. As a performer, she seems to vividly feel each line. When she falls into a forbidden love with Antonio, Beckham displays an eagerness that captures the universal excitement of a new affair. Simultaneously, she encapsulates the heroine's headstrong nature so admirably that you may find yourself cursing Webster for killing off the character so early in the narrative.

But as deeply as Hidden Room's staging is rooted in novel presentation, director Beth Burns knows when to pull these elements back. Case in point, the Duchess' torture scene, which finds terror in nothing but a darkened stage and impactful performances (namely, the gleeful sadism of Ryan Crowder's villainous Ferdinand). This brutality culminates in perhaps the most difficult-to-watch stage murder I've seen, with the broken Duchess strangled in a visceral manner, courtesy of Beckham's ability to portray strength and pain at once.

What ultimately bridges the production's lighthearted and macabre moments is a righteous, satisfying revenge, exacted here by the scheming malcontent spy, Bosola. Over the course of two hours, actor Judd Farris skillfully presents the inner journey that takes this character from unscrupulous henchman to bleeding-heart (if tragically mistaken) avenger. With a well-rounded energy, Farris provides a consistent north star for the show's many unique characters to move toward and against.

As Act II draws toward its end, bodies of men both good and bad litter the stage. Before we've had a moment to contemplate this climax of violence, the actors return to deliver a jaunty, choreographed dance set to live string music. This distinctive curtain call is the cherry on top of this company's quest to create a historically accurate theatrical experience. To me, this ending encapsulates what makes The Duchess of Malfi worth engaging: Here, Hidden Room has struck a delightful balance between realistic emotion and theatrical tradition – a balance that milks the word "authentic" for all it's worth.

The Duchess of Malfi