Eastside's Past and Present Revealed in John Mulvany's Latest Exhibit

"Secure the Perimeter" at grayDUCK Gallery asks, “What if the outside force is an inside job?” In "Secure the Perimeter," now on view at grayDUCK Gallery, John Mulvany asks us to consider the unnerving possibility that the enemy is already within the walls. The Irish-born, Austin-based artist seems to be paying his respects to the metaphorical death of a bygone era in this country, as well as the city's Eastside – his home of 15 years and where his current solo show is taking place. Based on photographs he took around East Austin with an old Polaroid, Mulvany's latest paintings and drawings speak to the neighborhood's specific story, even as that story shifts: cotton candy crape myrtles, botanical backyards, and kids being kids. But bright pink petals smear across the canvas in Bloom and overpower a boarded-up house: Is it abandoned, you wonder, or is the owner simply holding out?

Themes of death and decay accompany beauty and bloom throughout the show, much of it through the up-close, curious lens of childhood: insects and tiny creatures decomposing on the ground, a dead grackle sleeping peacefully in autumn leaves, and a baby bird cracked open from its shell on the sidewalk – an oddly intimate encounter with nature's utter indifference.

Earlier this year, Mulvany's own mother passed away, halfway through the show's production. "Put six adult siblings in their rural childhood home, and you've got the worst sitcom pitch in the world," he tells me with a light laugh when describing his Irish Catholic family all coming together this past spring. The artist spent two months in the place he'd grown up, tending to his parents – the longest he'd been back in 20 years. His time at home was filled with the heaviness of loss, he explains, but also the heavy soulfulness of Ireland, which added a new layer of meaning to this series which hadn't existed before.

But even in his grief, he's managed to bring a good deal of (dark) humor into the work. A biodiverse cluster of 17 smaller pieces in the back of the gallery – about half the show's work – includes a compilation of questions in subtle typeface, appearing quietly in each painting's margins: Do you speak slowly? Do you "circulate around" at social gatherings? Are you openly appreciative of beautiful things? They're questions which make you question yourself. (A quick fact check reveals that they're from a Scientology "personality test" pamphlet.)

Elsewhere, a useless television set – decidedly not a flat-screen – waits on the curb in anticipation of bulk item collection, along with an ugly pile of atavistic videotapes. Videotapes make several appearances, as if the VCR is a cultural metaphor for what no longer works in our society. Portraits of youth offset these old, worthless relics – even though the kids at play seem kinda menacing. In Dark Matter, a small child dressed up as an astronaut comes across as more ominous than innocent, his head replaced by a black space helmet staring blankly at the camera. Later in the show, the painting Lost Contact reveals this same spacesuit, discarded on a lawn, its small owner possibly abducted by aliens. Or, no – illegal aliens! Hmm ... maybe just Eastside gentrifiers from New York or L.A. 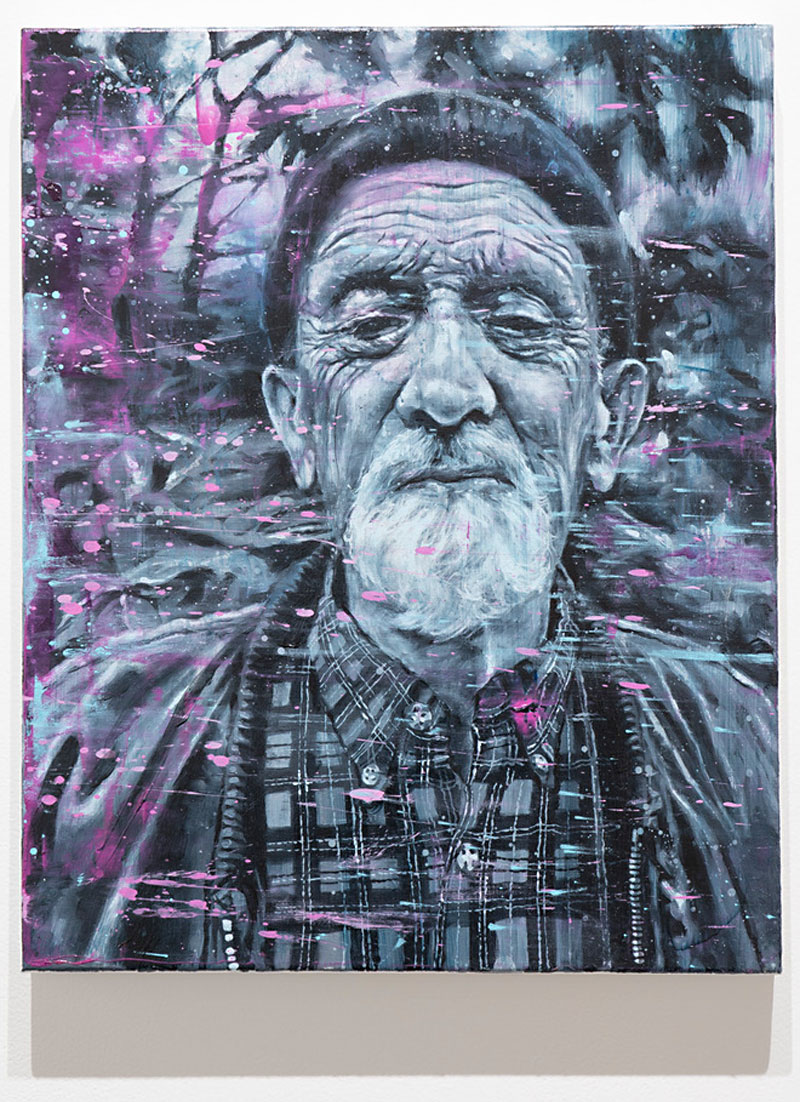 Many of the paintings in "Secure the Perimeter" contain little cometlike flares traveling through air: celestial particles of light invading the neighborhood, some moving more rapidly than others. Do these strange entities come in peace? Mulvany explains that his old Polaroid film left distorted sunspots on the original images, and what started off as a visual issue became symbolic: "Sometimes we don't notice small changes – until it turns into something big."

This is where he makes the leap from local to national, from his neighborhood's life cycle to our country's last election cycle. The First Days, a painting inspired by the 2016 election, features a man's fingers carefully prying apart his venetian blinds to peer onto a quiet residential street. Other than a blue pickup truck off in the distance, it's unclear what he might be checking for, which makes the scene all the more uneasy. (It turns out it's the artist himself, looking out at the world the day Trump became president.)

In an era of growing suspicion, tightening borders, and taking sides, it’s hard to say who comes in peace.

In an era of growing suspicion, tightening borders, and taking sides, it's hard to say who comes in peace. Perhaps there's no better person to ask than Floyd, whose eponymous portrait hangs in the center of the main gallery space. The longtime East Austin resident (and Mulvany's dear neighbor) has lived in the same house since the 1930s. Born an only child, Floyd's parents both died decades earlier, leaving him with no other family, only a neighborhood that he's known for his entire life. But things are changing, even for Floyd: He recently sold his house and used the money to move into an apartment nearby. Despite selling his childhood home, the plucky eightysomething is looking forward to this new chapter, which will include a microwave and air conditioning – luxuries he's managed to make do without for all this time.

It seems appropriately meta, an artist making art about a rapidly changing community, and showing that art in a venue that exists because of those changes. All too often the gentrifier, or stranger, is fleeing a place they, too, can no longer afford. It seems natural to see the enemy as an outside force rather than an inside job – something we've created – but what if, in building a wall, and securing the perimeter, we can no longer get out ourselves? As the cost of living rises, and the temperature, and sea levels, too ... will we all need spacesuits for where we're eventually going?

“Secure the Perimeter” is on view through Oct. 20 at grayDUCK Gallery, 2213 Cesar Chavez. An artist talk is scheduled at the gallery Sun., Oct. 6, 2pm. For more information, visit www.grayduckgallery.com.

A version of this article appeared in print on October 4, 2019 with the headline: We Have Met the Enemy ...