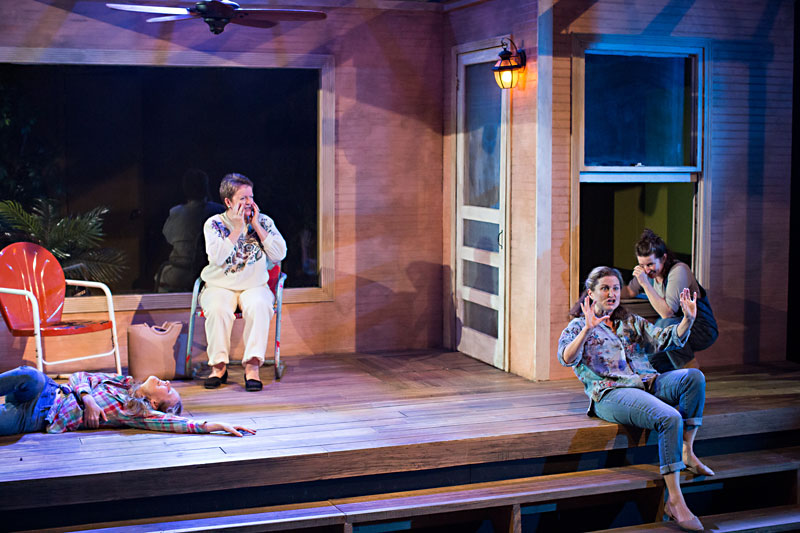 All of us have wondered from time to time what would happen if we could just say what we're thinking. In Paper Chairs' production of Will Arbery's Plano, that question is answered to glorious ends.

This is a play in which three sisters work their way through maybe a decade of their lives in all of 90 minutes. The pace is fast, the actors' delivery is fast, and if it had been any slower, the show would have cratered. One of the play's best mechanisms is when someone delivers a line like, "My sister is coming by later, it's later, she's here!" And skewering the playmaker's ethos of "show, don't tell," the sisters show everything by telling each other precisely what they're feeling at every moment, like when Genevieve (Hannah Kenah) tells her sister Anne (Heather Hanna) that her baby "looks like a dying worm," and no one pauses to take a breath.

The play is as much an exploration as it is a story. The frantic pace evokes the anxiety that some of us – okay, probably all of us – feel like a current running through our daily lives. It's personified, if that term can be used, by the Faceless Ghost (Matt Hislope) who lurks in the corners of the ranch-style home where the play happens (set design by Lisa Laratta). Eventually, sister Isabel (Elizabeth Doss) winds up in a brilliant slow-motion wrestling match with the Ghost, all while continuing to engage with her sisters and confront her own crisis of religion. Nobody sees the Ghost, or maybe all of them do but they don't care, or maybe both are true. It's the sort of thing that makes sense on a gut level, if not quite the level of rational thought.

Dustin Wills' direction is sharp and impressive, and the cast is terrific. Plano is another of those shows where the ensemble is so good that one hates to point out any one performance above the others, but Janelle Buchanan's work is unavoidably beautiful. Dressed in the white pants and flowered sweatshirt that's like the uniform of dismissed older women everywhere (costume design by Iman Corbani), she declares some of the most cutting truths of the play as she grips her three daughters desperately, somehow failing to find a way to tell them why they matter to her.

There are also several moments in which recordings of actors' voices are played as if the person is in two places at once. The number of times this has failed in live performance, where you know not only that it's a recording but which speaker it's coming from, is countless. But check it out: Wills (both director and sound designer) has made it work, and that's in the Ground Floor Theatre, a tall and wide performance space that has been known to eat sound. Well done, Paper Chairs, and thank you.

And as for the title, Plano: It makes sense if you've lived in the Dallas-Fort Worth area for any length of time. Nobody in the play really understands why anybody would go to Plano on purpose. It is, as Genevieve says, "like Dallas' synthetic cousin." Of the play's many pithy and delightful observations, that's one of the best.

A version of this article appeared in print on September 27, 2019 with the headline: It’s the Thoughts That Count 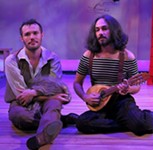