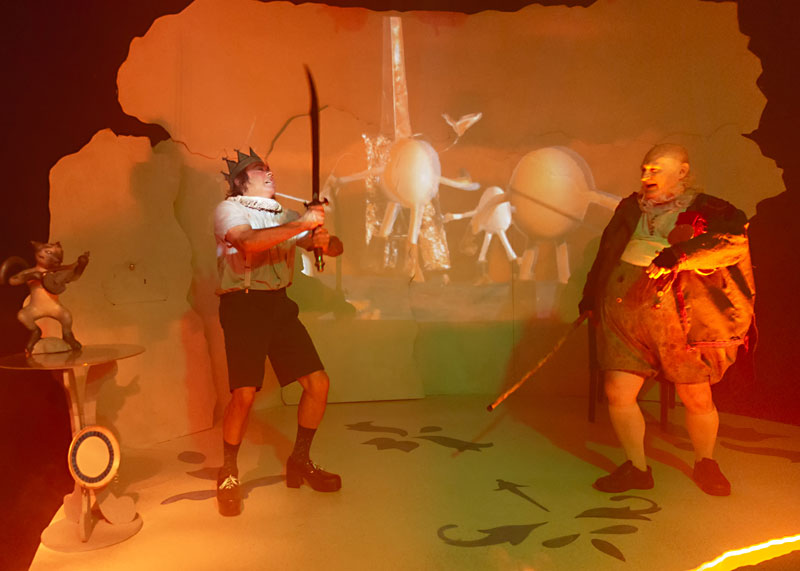 Seeing a show at the Vortex is typically a treat. What's not to enjoy about grabbing a Butterfly Bar martini and a plate of pasta from Patrizi's food truck, all without leaving the theatre grounds? The creatives at Vortex seem to agree, considering this indulgent preshow ritual is cleverly used against audiences in the morbid adult nursery rhyme, :Humpty.

An experience akin to reading a children's bedtime story after ingesting too much Ambien, Ethos' revival of this disturbing tale revels in the lighthearted atmosphere surrounding its performance space, as it leaves patrons woefully unprepared for the show's twisted imagery.

Penned by Vortex Managing Director Melissa Vogt (who dazzles in the role of the elegant Mistress Spoon), :Humpty recasts the egg-shaped protagonist as a sickly, perverted former war hero (a role that Mick D'arcy tackles with gusto). Jealous of his wealthy neighbor's magical mistress, Gen. Humpty undertakes a series of unscrupulous deeds that thrust his home kingdom into chaos.

While completely pantomimed, this show is far from quiet. Aided by live-action video segments projected onto the stage's backdrop, actors render words unnecessary through unnerving characterization. Mannerisms like the sick rictus of King Koray (gleefully portrayed by Gabriel Maldonado) or Humpty's visceral grunts suggest audience members are intruding upon the privacy of these bizarre characters, and the fact that these primal performances play out just yards away from blissfully unaware bar patrons only reinforces that feeling.

Key to this presentation's overall impact is the balance that Vortex Artistic Director Bonnie Cullum strikes between lighthearted fairy-tale elements and the macabre. This separation of the fantastic and grotesque is perhaps best encapsulated by Scenic Designer Ann Marie Gordon's egg-shaped stage, split into halves: On one side is the splendid residence of neighbor Sir Wedge­wood; on the other, Humpty's pitiful cottage.

Pitting lighthearted and darker elements against one another like equally matched prizefighters, Cullum and her team create provocative escapism rooted in humanity's uglier sides (greed, lust, violence). But they deserve credit for not merely shocking for shock's sake, but also for utilizing their talents to disturb in subtler ways.

As you exit the theatre, a part of you may wonder if :Humpty's otherworldly presentation really happened, or if something – ahem – "groovy" was slipped into your preshow martini. But then you'll put it out of your mind and set about browsing the food truck's offerings.

It's only when you're home alone, trying to fall asleep, that you'll involuntarily recall the brutality of the king's manservant, Dogsbody (Justin LaVergne), or Humpty's strained, cackling laugh. Then you'll realize how music, tech, and performance came together as one to unnerve. But for now, just enjoy some Patri­zi's carbonara, as Humpty will return to make you squirm again soon enough. The Vortex's Vampyress
Chad Salvata's gothic opera is the perfect treat for the season of ghouls, sensual and spooky