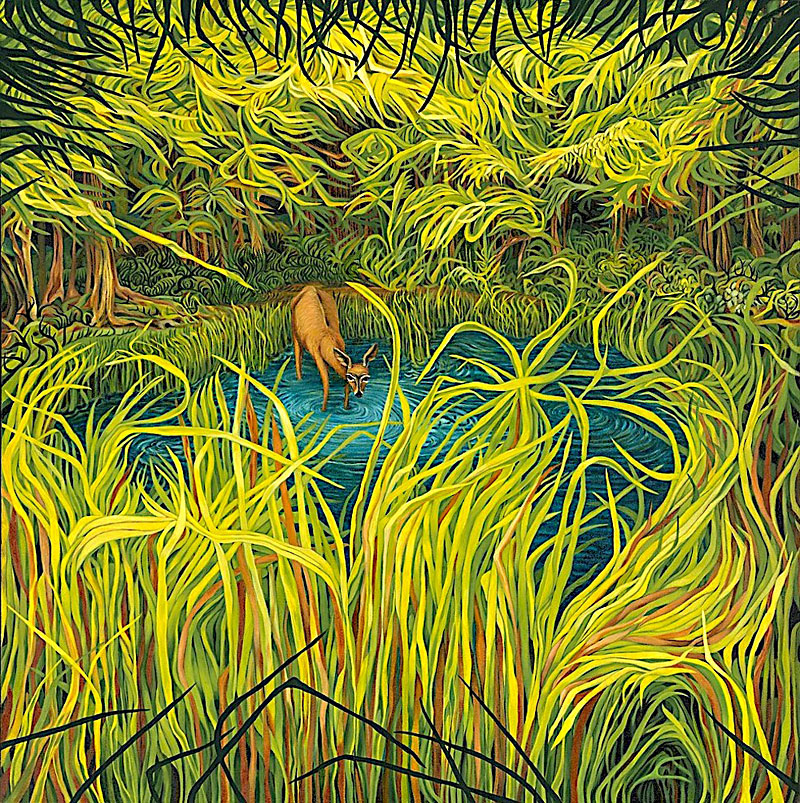 Our Hero at Her Bath by Valerie Fowler

It's time to play another game of Good, Better, Best.

No, not any kind of a let's-you-and-them-fight sort of deal, citizen. This is an arts review, not the goddamn WWE or whatever. What we're considering is a natural sequence generated by a single location here in Austin.

Troy Campa runs a gallery called CAMIBAart. He used to have more locations, but one was in the old Flatbed Press complex (which closed, and now the new Flatbed space is open) and one was on Sixth Street (and we don't speak of that one anymore), and so that leaves just the CAMIBAart gallery near the intersection of Highway 290 and Cameron Road. That's the one we're talking about – and it's Good.

It's actually better than just "good," we'd argue, no matter who's being currently highlighted, because Campa's constant display of art includes work by Austin's vinyl-weaving savant Adreon Henry and Orna Feinstein with her concrete-anchored mixed-media monoprints and Santa Fe's William T. Carson and those coal-encrusted panels of his, and so on. You can go inside any time the place is open and feast your eyes on those creative wonders and more, and, yeah, boy howdy.

But then we move on to Better, because right now CAMIBAart is exhibiting "The Story of the Deer in the Road," a solo show of new paintings and drawings by Valerie Fowler, whose work we've previously described as florapsychedelic, and it's not only an array of intricate beauty, it's also in support of a narrative about the artist's childhood and, yes, that deer in the road. And it all works in unison, flowing together the way Fowler's twisting lines of color flow, surpassing even the strength of the individual deer-enhanced and botanically trippy pieces, and everything is (as usual, per CAMIBAart) elegantly displayed.

And then we arrive at Best. Because, in addition to the hung artwork, Fowler has created a new "crankie" show – one of those oldfangled side-scrolling tableaux that's umpteen feet long and advanced through its frame by cranking the rods that enroll it – and she reveals this show (the whole thing is painted in full color, no less) while her husband, musician and composer Brian Beattie, provides live musical accompaniment. This delightful multisensory parade (rosemary – that's for remembrance) is preceded by a response-to-the-artwork by writer Robin Chotzinoff.

(Note: Live responses-to-artwork are sometimes nothing you'd want to waste time listening to. So please know that I'm mentioning Chotzinoff's series of 20 fleeting takes on deer and home and memory because, knock me over with an antler, they were equally enjoyable as, if perforce less complex than, Fowler's paintings. Just ... ah, so beautiful.)

And I wouldn't mention this "best" part, either, if it weren't still available for your experience. Which is why it's a good idea to click over to CAMIBAart online and RSVP for one of the two remaining crankie performances: Sat., Sept. 21, 6pm, or Thu., Sept. 26, 6pm. Reckon you'll enjoy an escape to cool and phantasmagoric Texas wilderness right there in the midst of our city's ubiquitous sun-baked asphalt and concrete and glass.