In Charly Evon Simpson's drama, characters caught in the dark currents of grief and depression seek a way through 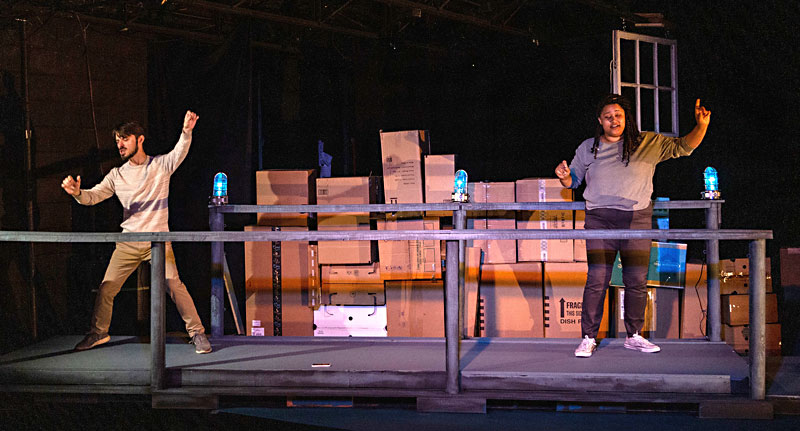 She leans on the railing of the bridge, taking a halfhearted pull on her vape pen before dropping it into the waters below. Her face is still, which makes it that much easier to see how drawn it is, with loss, with sorrow, and in her eyes is a brokenness, a fatal crack that, as with a dam, could at any moment give way, releasing a flood of water.

He leans on the railing, too, but never for long. He'll stare down, as if gathering the resolve to take some decisive action, then pull away, eyes darting, fingers snapping frantically, taking a few manic steps in one direction and suddenly changing course, over and over. He looks to be reacting to some internal voice, but whether he's trying to follow through on its command or resist it is difficult to tell.

These two may be opposites in their expressions, their bearings, their behaviors, but with both on a bridge and with Charly Evon Simpson titling the play that features them Jump, we can be justifiably concerned that they're there with the same intent: to vault over that railing and make the long drop to The End.

Simpson has weighted her play with questions about mental health and suicide, and in Shrewd Productions' staging – part of a National New Play Network rolling world premiere for Jump – the actors fill themselves to the brim with dark waters, the kinds of feelings that might drive one to take one's life. With Chelsea Manasseri's Fay, they swirl around family: grief over the death of her mother from cancer, melancholy at her father's decision to sell the home that she and her sister Judy grew up in, friction with Judy over the kinds of sibling grievances that date back to childhood yet last a lifetime. These are pains heavy enough to weigh down any heart and sink it into despair, but with Fay they're complicated by unanswered questions about her mother – such as her deep, ineffable attachment to the bridge that Fay visits – and the mysterious migraine-like attacks Fay suffers (signaled by designer Nick Hart here as a sound like metal twisting or scraping against metal), attacks that seem to reset time.

Manasseri invests herself so fully in Fay's pain that even in lighter moments – as when Fay and Judy (Allegra Jade Fox, polished and assertive) gleefully free-fall backward onto their beds as they did when they were kids – the sadness in Fay's eyes is still evident, the furrowed brow visible above the smile. Something inside Fay – in her mind – wants to pull her under, and though we see Fay trying to fight it and find answers, it's bigger than her, and neither Judy nor Fay's dad (Kyron M. Hayes, wearied by woe) can seem to help her.

So Fay keeps visiting the bridge – a spot that would seem increasingly dangerous given all that's going on with her – as it would seem for Hopkins, the bridge's other regular visitor. Both look to be wrestling with Hamlet's great dilemma – to be or not to be – and leaning more into the "not" option. But then a funny thing happens at the bridge – not just peculiar/curious funny but truly laugh-provoking. Hopkins, after pulling away from the railing, dials up some Queen on his phone and blasts "Another One Bites the Dust" – presumably to psych himself up to bite it, too – and dances himself into a frenzy. (Trey Deason's high-octane moves, including calisthenics and air bass, make for an ecstatic counterpoint to his agitated activity from before.) As it's loud enough for Fay to hear, she joins in. This random dance party in a random public space with two strangers who are so into it is a hoot, but it's also a breakthrough moment for the characters: For three minutes and 35 seconds, they seem to lose their fixation on the waters below and recover a connection with the joy in life. The playwright doesn't use this as a "meet cute" for a Fay-Hopkins romance or make their mental health issues magically fade away with the music. She makes clear in the script – as Shrewd Artistic Director Shannon Grounds does in her staging – that such issues are complex and take time and effort to work through. It's vital, though, to have help in dealing with them, to be connected with other people. And in Jump, we're reminded that the way to connect two points over dark waters is with a bridge.

A version of this article appeared in print on September 20, 2019 with the headline: Cross That Bridge 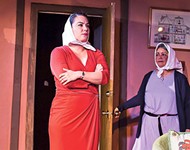