In the world premiere of Lisa B. Thompson's play, the lives of single black mothers are seen, and felt As support group retreats go, this one starts quite genially, with hosts Lauren and Tasha circulating through the room and giving folks personal welcomes. When they open the gathering officially, they make note of the generous treats from Trader Joe's and Whole Foods (gluten-free and vegan options available), and their introductions attest to the level of professional achievement among the members (Lauren: English professor; Tasha: pediatrician). Even when they're joined by first-timer Beverly (salon owner) to discuss – make that act out – the agonies and indignities of childbirth, a sociable spirit and good cheer fill the space. Sisters in the BBSM – Black Bougie Single Mothers – are here to share, and in this case, that can be fun.

In making a social group meet-'n'-greet her setting for The Mamalogues, Austin playwright Lisa B. Thompson (Underground, Monroe) has given herself lots of room to play. The milieu is as familiar as it gets – who hasn't sat through a meeting like that, especially one overseen by a stickler for decorum? – and it allows for a gently immersive environment for the audience. Topics can come and go at the drop of an agenda item – or in this case, the pluck of a slip of paper from the ice-breaker basket – and the characters are free to role-play whatever the subject demands – early on, a newborn mouths off to her mama about the taste of her breast milk.

Motherhood is the through line of The Mamalogues, and Thompson treats it in a way that everyone can recognize; even if you have not been a mother, you've had one. The pains, physical and emotional, endured by moms; the protectiveness that borders on the irrational; the control-freakishness that totally is irrational; the full-hearted, unequaled, wondrous love of mother for child – all show up, and all are made easy for anyone to relate to and often laugh at.

The socioeconomic status of the moms is likewise recognizable, and the play wears it as lightly as Tasha does her linen shift – putting "bougie" in the group's name shows Thompson isn't shy about poking fun at her lifestyle, or her peers' upscale tastes. (Witness the women's excitement here when a bottle of fine red wine shows up.)

But alongside "bougie" and "mothers" in the support group's name are the words "single" and "black," and they carry a weight that must be acknowledged. Thompson does so in dramatic moments that live side by side with the comic ones, just as happens in life. In this world premiere from Color Arc Productions in collaboration with the Vortex, scenes reveal "single" to be a euphemism for "alone," with a mother shouldering the burden of raising a child without a partner or a family to supply support. In a heart-wrenching scene, Melody Ann Fullylove's Tasha wins the crowd over with an a cappella rendition of "Blessed Assurance" – a stirring tribute to a core faith – only to turn around and reject Yvonne Oaks' Lauren for being gay, a violation of biblical teaching she cannot abide. The bitter hurt of Oaks' expression makes clear how isolated she feels, and how it is one more obstacle for her as a mother.

But in this country, race is the greatest obstacle. In the childbirth sequence, much of which is played for laughs, Beverly's mind turns to ancestors giving birth in slave ships, and Valoneecia Tolbert makes the moment real and riveting. Anecdotes that might have a universal humor – say, the first time you lose sight of your child on the playground – become freighted with terror when you're the only black people in a park full of whites. Racism is no laughing matter, and it can be anywhere. And how does a single black mother protect her child from it? From what happened to Tamir Rice. Michael Brown. Trayvon Martin. You can give the talk that every black parent has to give to their child, but is it enough? The Mamalogues tracks its mothers to the moment when their children are old enough to leave home and go out on their own. And the questions linger.

This play and this production welcome us all into the sisterhood of Black Bougie Single Mothers, and we share in many laughs while we're there. But the impact and import of The Mamalogues – as shared by Thompson, director Rudy Ramirez, and the three performers – may be in the moments between the laughs, in the silences where we feel the weight borne by these brave mothers.

A version of this article appeared in print on August 30, 2019 with the headline: Mother Courage 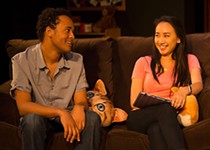