In this documentary play, seven women from around the world tell stories that are tragically familiar One by one, they tell their stories, each from a different spot on the globe, each from a different culture, but all sharing a sickening familiarity: They're stories of women being oppressed, silenced, violated by men. In Russia, Marina has her life threatened by an anonymous caller to her home, a man who objects to her helping women abused by their husbands. In Cambodia, Mu attempts to rescue women trapped in the seamy trade of sex trafficking. In Pakistan, Mukhtar is gang-raped by four men granted permission to do so by a tribal council as revenge for a crime against honor.

Such events hardly qualify as news today. They weren't news when the stories of these women were collected in Seven: A Documentary Play more than a decade ago. The tragic truth is women have suffered such subjugation and cruelty at the hands of men for thousands of years. Yet, even as we recognize the parts of these tales told so often by others – expressions of male superiority, intimidation, violence, sexual defilement, dehumanization, a sense of ownership of women – we're hard-pressed to stop listening to the tales in Seven. For one thing, they come to us as testimony, as the actual experiences of women. The truth in their words compels us to keep listening. For another, their testimony comes in this Last Act Theatre Company production from women of our own community, fellow citizens who channel the trauma, pain, and struggle of the seven through their own bodies and voices, our connection to them tightening the bond between us and these women from Russia, Cambodia, Afghanistan, Guatemala, Nigeria, Ireland, Pakistan. To ignore the experiences of the women in Seven would be like turning away from the women who play them – who are our neighbors – if they were to tell us that these horrific things had happened to them.

In sharing the tales of these women from far away, each actor here appears to use some emotional touchstone within the woman she plays with which she grounds herself in the woman's life. For Kate Meehan, it looks to be the disgust and betrayal the Russian Marina feels for a culture in which men have for centuries believed that "a woman doesn't feel love if you don't beat her." We see that disgust feed her resolve to combat domestic violence and finally to confront the cowardly caller taunting Marina with threats night after night. For Kacey Samiee, it looks to be the heartsickness that Farida Azizi knows from seeing women in Afghanistan held down by men – especially those in the Taliban – who withhold from women medicine, education, all opportunity. Yet that deep ache somehow propels Farida to courageous acts, to go where there is danger, to speak truth to men holding guns, to open a school. For Nikki Zook, it's the Irish's unique mix of cynicism and optimism, resignation and resolution – "I can't go on, I'll go on" – that powers her animated union organizer Inez McCormack. Whether browbeaten by bosses or just beaten by cops, Zook's Inez always picks herself up and stands up for the poorest and most poorly treated, especially the women – typically with a cutting bit of wit and a chuckle.

As sharp as the pain of these stories gets – and it can be sharp enough to stop your breath – it's the perseverance shown by Inez and the women like her that really impresses itself upon you. How the women of Seven go on, not only with their own lives but also improving and saving the lives of others, is remarkable – examples to us all. The power of it is enhanced by the simplicity with which director Chelsea Manasseri stages it: without flash, without show, with room for stillness. Sabeen Noorani as Mukhtar straightforwardly describes her gang rape, and by not acting it out, she doesn't defuse the horror of it; she lets our imaginations fill in the spaces and amplify its horror. And the address to the audience is so direct that in the intimacy of Trinity Street Theatre, we might believe that these women are speaking to us personally.

That personal connection lingered as I left the theatre. Then, turning on the car radio, I heard two sisters from Saudi Arabia telling a BBC reporter about fleeing their homeland to escape having to wear hijab and niqab, beatings by their parents, and forced marriages. The words of Dala and Dua al-Showaiki, spoken in the first person, so echoed what I'd just heard in Seven that they sounded like an eighth monologue. So it turns out that stories of women's repression and abuse by men, while not new, are still news after all.

A version of this article appeared in print on August 16, 2019 with the headline: Sisters, O Sisters 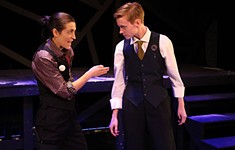