Grageriart: Design 4 Everyone at Crashbox

Math rock is hard, let's go shopping with some robots 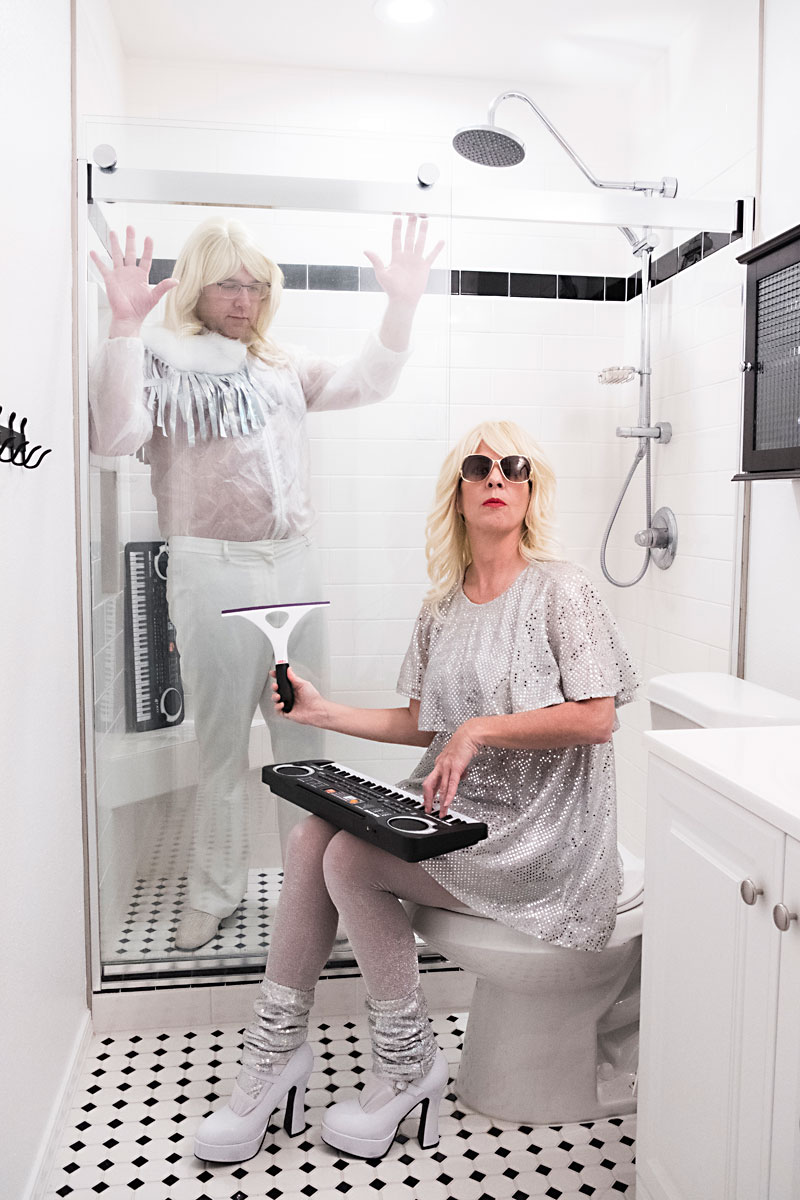 Grageriart is trending in the Austin theatre scene, its hotness increasing with every iteration of the keyboard-fueled, voice-modulated, fabulously costumed send-up of modern shopping and the robot-abetted peculiarities of late-stage capitalism.

(Or is that, ah, late stage-capitalism?)

Who's to blame for this surging popularity, this threatening-­to-go-viral uptick in pointedly Scandinavian consumerism (quick, don't anybody say IKEA!) presented as a delightful, devilish, product-jingle concept album come to life among twinkling lights, branded swag, and Kraftwerkish choreography?

It's those Rude Mechs, don't you know, inaugurating their new Crashbox space. The Rudes – this time embodied as Grageriart by Lana Lesley and Peter Stopschinski, the well-known actor and the well-known composer performing their creation together as an electric-ivories-tickling twosome who exists to bring an audience deeper into retail-therapy enlightenment. Clad in matching iridescent white outfits that also coordinate with their frostbright wigs, Lesley and Stopschinski unleash streams of come-hither-and-buy banter in bursts of arch dialogue and song that are variously and rapidly deepened or chipmunked or autotuned for 1) basic character differentiation, 2) complementary musical effect, and 3) maximum hilarity.

And, O holy hygge, is that hilarity ever maximized in Design 4 Everyone, as the Grageriartists provide updates on what's trending in the fully stocked store, interspersing their commercial flow with guest celebrity appearances and bits of public commentary that's not unlike what you'd recognize from sites like YouTube, say, or The Austin Chronicle. And while the two harmonic hosts are cutting loose, they're flanked by a pair of dancers – Mari Akita and Eliza Renner – who stalk and strut their time upon the stage like stylish automata, and everybody's been dressed by Leslie Bonnell (who you'd swear came direct from Planet Claire), and it's no wonder that the whole audience is alternately impressed by the skills on display and giggling uncontrollably at the consumerist skewering.

Sweet Ingvar Kamprad, what a couple of Swedish-ish meatballs!

"Design 4 Everyone is an experiment in intimate listening," says the evening's program. "Grageriart is a band, a lifestyle, a sonic exploration of showrooms carved out of the permanent into planned obsolescence." It was also, last weekend, a workshop production, maybe the third version of what Lesley and Stopschinski and associates are working toward; and, like most of what the Rudes do, the show was at least the equal of other companies' fully finished presentations.

We're not sure how what the Grageriart crew has done so far could be improved – another dancer or two? perhaps some clever video embellishment? – but whenever it's ready to go, we know we'll want to be there. Because we want what they have. Oh, yes we do. We want it so bad.