The Rose: Trouble in Paradise at ColdTowne Theatre

This improvised riff on The Bachelor captures the raw, trainwreck appeal of reality TV dating shows 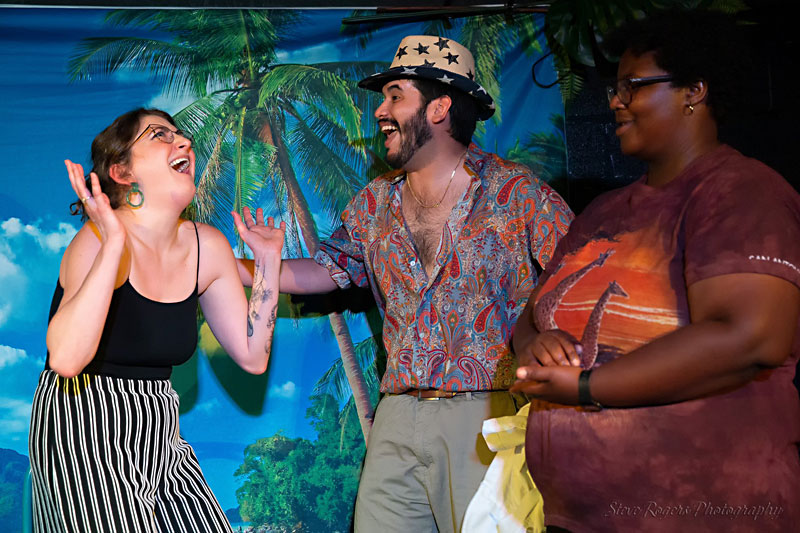 Back in 2007, I was tricked into watching three seasons of the trash reality-dating competition Rock of Love, wherein 25 fame-hungry bachelorettes vied for the heart of rock star Bret Michaels. Hoping to catch a glimpse of my then-musical idol, I subjected my innocent young mind to 50+ hours of sex, drama, and hot tubs. While it probably cost me a few IQ points, bingeing this series was my first exposure to the sort of vulgar hijinks found in ColdTowne Theater's main stage production The Rose: Trouble in Paradise.

The latest in a series of improvised, The Bachelor-inspired competitions, Paradise models itself after dating show spin-offs, with "fan-favorite" contestants from fictitious seasons past (e.g., The Rose: Widows, The Rose: Goth Girlfriends, etc.) stepping back in front of the camera – "for all the right reasons," we're assured. A hot mess in and of itself, this current iteration captures the raw, can't-look-away-from-a-trainwreck appeal that defines the TV dating genre, even when it doesn't intend to.

With director Lilli Lopez allowing her cast the freedom to create their contestants prior to showtime, Paradise becomes a character free-for-all. Bright Southern belles, crazed cult leaders, and even a sex-starved alien share ColdTowne's stage in their quest for love. Though several performers paint themselves into corners, never developing beyond one-note gags ("Haha my character is an old man"), others like Mase Kerwick's wannabe socialite or Jessica Leath's frumpy widow thrive in this anything-goes format. (Kerwick's sickeningly flirtatious pickup line, "Care to join me for some cheesecake in a ... factory setting?" might be my favorite ColdTowne quote of 2019.)

Once we're acquainted with this disparate cast, the characters launch into a high-intensity hour of fighting and/or sleeping with one another. Attempting to maintain order amidst chaos is The Rose's host, portrayed on the night I attended by a flustered Dylan Garsee. Wisely playing several missed light and sound cues for laughs, Garsee set an appropriately chaotic atmosphere that suggested audience members had actually dropped into a reality show's hectic principal photography.

Tying Paradise's loose format into something resembling a coherent narrative are unique, talking-head-style cutaways. To simulate prerecorded cast interviews, improvisers take a corner of the stage (usually mid-scene) to deliver brief asides. This element seems to open a world of potential for the improvisers. Not limited by the scene currently unfolding, these interjections give actors the opportunity to introduce new plot points, develop their characters further, and, most importantly, add some much-needed variety to dragging scenes.

Not unlike the ratings-hungry programs it parodies, Paradise aims to entertain by any means necessary – and it succeeds more than it doesn't. The sheer variety inherent in its format and characters is more than enough to keep an audience's attention for its hour run time; I can only imagine what narrative opportunities the cast will seize upon in future performances. Although I can't say I'm eager to attend another "episode" – any more than I am to rewatch Rock of Love – I am satisfied that I got to experience this overwhelming force of improvised theatre at least once. After all, I've never agreed with dismissing indulgent television like The Bachelor or Jersey Shore as simple time-wasters. If you're legitimately enjoying yourself, is your time really wasted?

The Rose: Trouble in Paradise

A version of this article appeared in print on July 26, 2019 with the headline: Chaos on Camera Latinauts: The Wrath of Juan at ColdTowne
Prima Doñas’ third installment of its popular “telenovela in space” delivers the laughs