Police chief Samuel Craddock searches for a missing friend while on a visit to Jarrett Creek, Texas 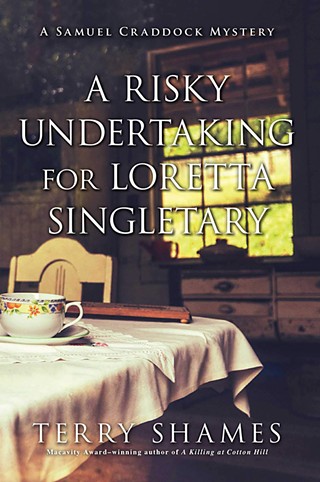 You won't find Jarrett Creek on any map of Texas, but you will find it in pretty much every small town you visit in the state – maybe even the country. The Central Texas burg that author Terry Shames has created for her mystery series starring Chief of Police Samuel Craddock has that distinctive feel of the small town: its slower pace of life; its quiet; its handful of places where everyone gathers (cafe, church, school); its pride in traditions, however frivolous; its neighborliness that comes from everybody knowing everybody; its hotline of gossip that comes from everybody knowing everybody else's business; its friendliness and feuds longstanding; and its disputes that get so big because the stakes are so damn small. All of the above play a part in A Risky Undertaking for Loretta Singletary, and, as conjured by Shames, they're every bit as familiar and tantalizing as the home-baked cinnamon rolls the titular Ms. Singletary regularly brings to the home of her neighbor, Chief Craddock, just because.

When the cinnamon rolls suddenly stop coming and no one knows where Loretta is – no suitcase or dishes in the sink suggesting an abrupt departure – the chief finds himself with a missing persons case on his plate. The fact that this person is a dear friend makes the mystery unusually personal and unsettling for the veteran lawman. As evidence points to Loretta having lately been swiping right on a website for singles of a certain age (the cleverly named SmallTownPair.com), Craddock fears she's gotten involved with someone disreputable, perhaps even dangerous, and his rock-steady demeanor starts to crack. Time is of the essence, but he keeps being distracted by controversies over the town's annual goat rodeo – y'know, youngsters wrangling goats, a three-legged race with kids carrying kids (the caprine kind), and so on – which has always been sponsored by the Catholic Church; but the new Baptist preacher wants a piece, and he's making one holy stink about it. Such a tempest in an iced tea glass adds to the flavor of life in Jarrett Creek, and Shames gets the peppery taste of small-town pique just right, church ladies and all. The subplot also adds some welcome balance to the fraught search for Loretta, which plays out more slowly than most of today's crime novels but still with ample tension. (Shames knows her way around a red herring, and she deploys a few good ones here on her way to the solution.)

I'll confess that like that Baptist preacher, I'm new to Jarrett Creek, so I can't say how this eighth novel in the Craddock series compares with its predecessors or builds on the stories of its characters, most of whom seem to have been residing in the town for some time. What I can say is that on my first visit, I never felt like an outsider in Jarrett Creek. Shames gives us the lay of the land so proficiently that we're clear right away who knows who and how, who we'd like to get closer to, and who we'd just as soon steer clear of – *cough* Baptist preacher *cough*. Craddock is an agreeable hero, older and a bit out of touch with modern life but not so old-school inflexible that he won't question himself or express emotion. Like his town, there's warmth there, and given this book's portrait of loyalty and devotion to friends, doing right by one's neighbors, and small-town familiarity and generosity, I'd say another visit may well be in order.

A Risky Undertaking for Loretta Singletary