In this new play by Terrence McNally, Diaghilev and Nijinsky seek revolution and godhood in the 20th century 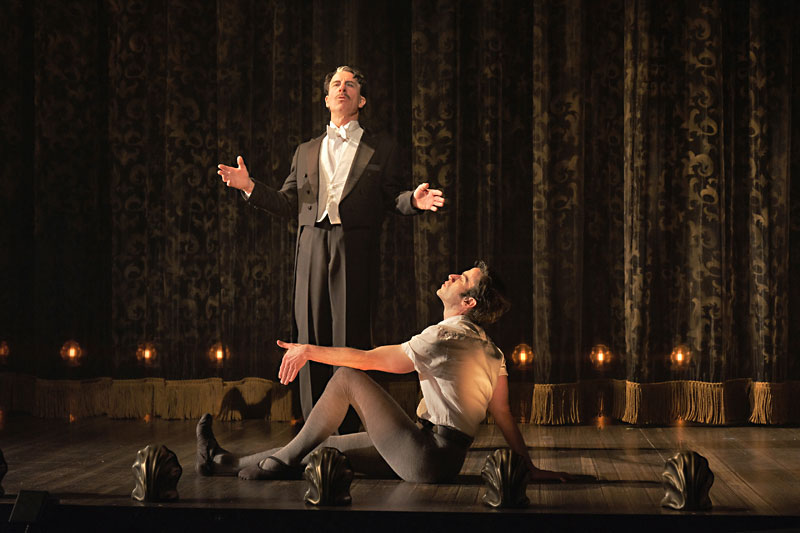 Gods create. That may be why the characters in Terrence McNally's Immortal Longings, receiving its world premiere at Zach Theatre, keep talking about artists as deities. Out of the void, artists make something that's never existed, and in doing so, they also make for themselves some measure of immortality. Their art endures long past their last breath. Claude Debussy is gone, but his Prélude à l'après-midi d'un faune is still played and listened to. Vaslav Nijinsky is dead, but his ballet using that Debussy piece and his own performance in it – while never filmed – survive him.

So when, in the play, the young Nijinsky proudly proclaims to Sergei Diaghilev, the Ballets Russes producer (and, at this point, his lover), "This is the beginning of the 20th century, and there is a new god of the dance and his name is Vaslav Nijinsky," it lands as no idle boast. Even without us having seen him move (other than to climb out of bed naked), we sense the destiny on him. And entwined with it is Diaghilev's keenness to play Pygmalion with this balletic Galatea, to mold the "gypsy boy" and his genius into something divine for this bold new era.

McNally sharpens our awareness of the time here, a period of revolution on all fronts: in the politics of his Mother Russia, in the war that envelops the whole world, and in art. Old gods are being overthrown and new ones erected, and Diaghilev intends for his troupe to be a source for new gods. And as he nurtures his young star in the creation of L'après-midi d'un faune, he aims to "drag Europe into the 20th century whether it comes with me or not." His idea that the "Diaghilev revolution" will be more enduring than the one coming to his homeland cues us that this man, who admits to being no artist himself, who won't take a curtain call with the dancers he calls "angels of Apollo," nonetheless yearns for a touch of their godhood, to be remembered and so live on through eternity.

That's such a mortal desire, yes? And part of what keeps Immortal Longings captivating and ultimately rewarding is its depiction of Diaghilev as a walking contradiction, swollen with bombast and vanity yet vulnerable to his own appetites, the self-described Colossus fearing that finally he is invisible, useless. Steven Epp conveys this mercurial nature of the impresario (a word he hates!) with quicksilver ease, one moment sucking all of the oxygen out of the room with his nonstop gab and dominating his long-suffering companions – cousin Dima, friend and patron Misia, and nurse Dunya – the next shifting into worry over his legacy; wordless desire for Nijinsky's successor in the bedroom, Massine; and fascination with art being made. (In a scene where Diaghilev watches a film of Nijinsky that the audience can't see, Epp's fixation on the unseen images and the ardor in his description brings them to enthralling life.)

Diaghilev dominates Immortal Longings much as he does everyone around him, but just as the character gives space for us to see more of him, so does the play with the other characters. McNally gives each at least one moment in which they expand from sounding boards for Diaghilev into people with their own lives and points of view, and the actors here make the most of them. Shannon Koob projects a convert's fervor when Misia speaks of art's power to change and sounds a note of bitter pain in relating Misia's encounter with the blood and death of the Great War. James Patrick Nelson brings an unexpected tenderness to the reserved Dima as he admires the beauty of young men on the seashore and recalls the connection with his cousin in their youth. Joshua Pagan communicates the ambition of Massine with a sensuality crackling with electricity. Wyatt Fenner's assertive Nijinsky turns fragile and wistful as his mind fails him. And Suzanne Warmanen's Dunya reveals her take on love with a deliciously blunt humor. Through these moments, we see this bold new future still struggling with the past.

Zach's production, staged with artful care by Peter Rothstein, provides its own sense of the past through sumptuous visuals: the elegant scenic work of Michael Hoover with impressionist-style projections by Rodd Simonsen, the rich costumes of Susan Branch Towne, the warm lighting by Philip Rosenberg. We're conscious of looking backward in time even as the characters are looking forward. Their brave new world is distant history to us. What is old and what is new have shifted. And yet their creations still speak to us. They live. Diaghilev, it seems, has his godhood after all.