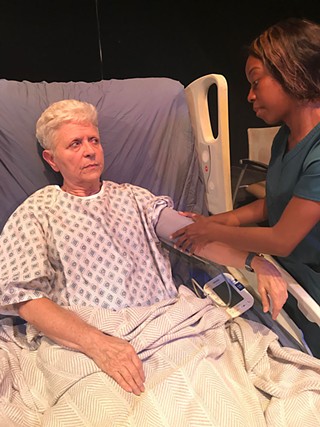 Lucas Hnath's play Death Tax begins with a nurse just doing her job and a patient who won't let her. Maxine (Lana Dieterich) is sick and expected to die within weeks. The rules concerning the taxes on inheritance change on January 1, and Maxine is convinced that her daughter (Sarah Chong Harmer) is paying nurse Tina (Web Jerome) to slowly kill her before then. The idea is that the daughter would inherit more money if her mother dies early than she would if Maxine lasts the year.

Leaving aside the fact that the cantankerous Maxine could just change her will or establish a trust to avoid the tax if she actually wanted to stick it to her child, Tina's routine check-ins with Maxine turn suddenly messy. Tina has plenty of problems of her own, too: She has a custody battle waiting for her back home in Haiti if she can just raise the money to fight it. Maxine offers to pay her way there if Tina will keep her alive until January 1. That this sort of exchange is entirely illegal is not Maxine's concern.

Under Artistic Director Ken Webster's direction, Hyde Park Theatre has found a perfectly sized play for its space and its people and has matched it to a great cast. Dieterich shows all the ways that a bitter woman like Maxine is complicated and wounded in her own right. As Tina, Jerome navigates the monologues of Hnath's work capably, and her Haitian accent lands. Especially revealing are the scenes between Tina and her supervisor Todd (Chase Brewer), the kind of nice-on-the-surface loser who lashes out viciously in the face of rejection, in total "Cat Person" style.

Death Tax features five scenes. The first four appear to be telling one sort of story, but the fifth provides the ending to a very different story. It's all very well written, with the kinds of insightful and sensitive character portrayals that are a hallmark of Hnath's writing (The Christians; A Doll's House Part 2). It's only like someone maybe got confused at the photocopier or something and put another play's ending on the one you were just watching. It has some of the same characters, but as expressed in this production, the themes take a sudden turn in another direction.

If a person isn't slowed too much by this speed bump of a transition in the final scene, then what remains on either side of it is thought-provoking and interesting. Hnath's gift to American theatre is his ability to humanize the sorts of people who are referred to only broadly in public conversations around complicated social exchanges: immigrant nurses, mothers on food stamps, people who are abandoned and dying. Death Tax eventually settles around questions of what "quality of life" actually means when genuine kindness is in short supply.