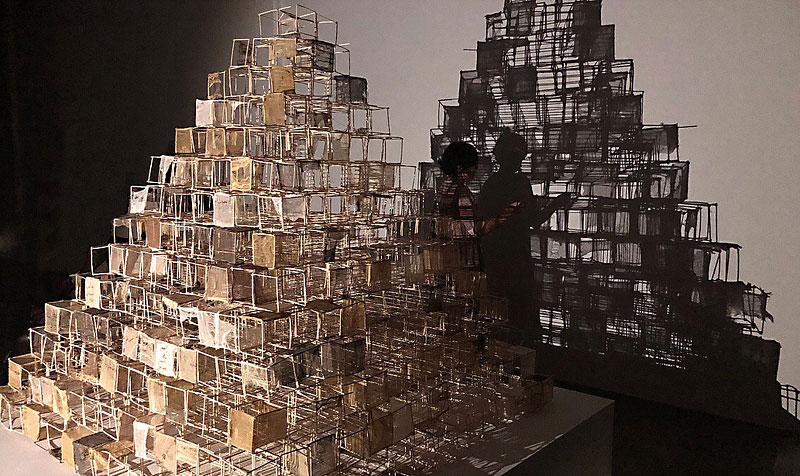 The material impressed upon the open book pages is embossed with a stamp from the Middle East. One near it bears a postmark from Cairo. From the moment we enter Rehab El Sadek's "The Memory Palace," the artist is guiding us through her history – a weighty history, judging by the thickness of the volumes, and one that originates quite far from Austin. Patterned and textured fabrics and what could be hardened sand, as well as postal notices, are layered onto and into them, so we sense some elements of the culture that belonged to El Sadek's life there.

The exhibit title puts us in mind of the past and how we connect to it. The materials that appear throughout, like those covering the books, are frayed and worn as with age, suggesting the fragility of memory. The beauty of the thing's original form may still be visible, but it's ragged now, full of spaces that you can see through. Old memories, like old objects, can lose details; they become more the shape of an event, a feeling, a place we recall. This is nowhere more evident than in Haram Xafra, the largest structure in the gallery: a 6-foot-tall ziggurat composed, as the exhibition program informs us, of 420 individual wooden cubes constructed as El Sadek contemplated her own past. Here and there, scraps of delicate linen hang on individual cubes, but most of the blocks are uncovered and open so that we can see through them, and the light shining at the structure throws the shadow of a skeleton onto the wall. How easy it is for "memory palaces" to decay and lose their flesh over time – just as the frail bodies that house them do.

The work that actually bears the title of the exhibition would seem to take the idea of memory's impermanence to its logical conclusion. This Memory Palace is a 6-foot-long strip of black cloth pressed in glass and suspended from the ceiling, and while it's possible to study the work itself, the lighting directed at it projects a larger and more compelling image on the wall behind it: a great rectangular shadow that reveals among the blackness white lines forming various layouts for a building or buildings. Again, the helpful program relates that these are "adapted in part from architectural plans for a mosque developed by El Sadek's paternal grandfather." The projection would seem to depict the ultimate fate of memory, like life: losing all tangibility, existing only as energy which will eventually disperse and be lost forever. And yet this shift out of the physical realm can also be viewed as a form of transcendence, achieving a mental or spiritual purity through which a grandparent and grandchild may commune and fuse their memories into one.

The metaphysical musing that El Sadek's exhibit inspired in me was in large part shaped by my particular experience of the show: alone, late on a Friday afternoon, when the act of stepping out of a blazing, bustling, weekend-minded world into the silent gallery – its heavy black curtains blocking out all external light, the dim internal illumination making a twilight space, the only sound my own footfalls – created the sensation of being in a museum or library after hours. I was in some private chamber that encouraged education, meditation, even personal communion with what was displayed there. Given the intimate nature of what the artist had set out for visitors to see and ponder, I might have been in her own mind – or at least the part of it that constitutes her memory palace. I felt it a privilege to be so close to her when the place she was was so long ago and far away.