Rub a Duck at Blue Genie

These are the kinds of movements that will make everyone moist 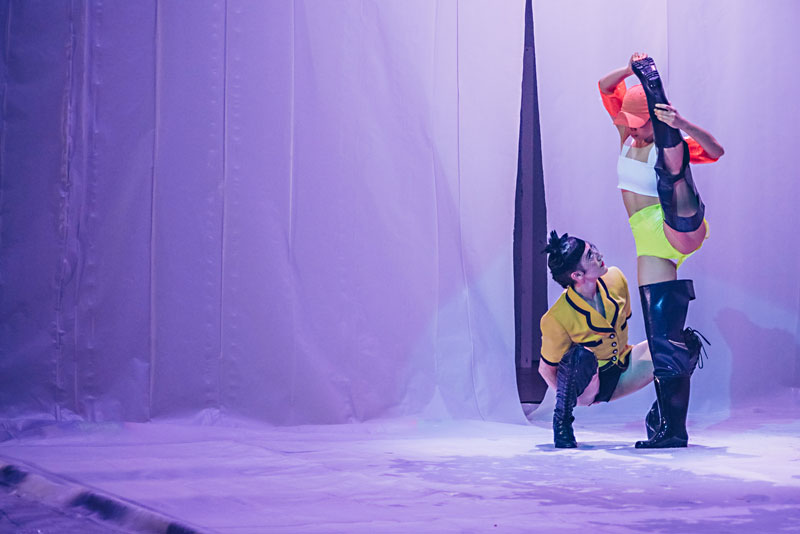 Because I just saw – no, I just experienced – the physical-theatre spectacle called Rub a Duck by the Frank Wo/Men Collective. I witnessed, hallelujah, what a capering cadre of highly talented minds and bodies can do when they set out to – what? To meld a barely clothed deconstruction of the best scenes from Singin' in the Rain with Leopold von Sacher-Masoch's Venus in Furs? (Note: More like Venus in a Speedo, actually.)

Or maybe it was – considering the background conceit of being a look into the cultlike processes of an identity-wracking facility called Transformation House – a parody of Sixties-era Est and Esalen and so on? As if the parody had been directed by Austin's erstwhile Rubber Repertory boys as an homage to the Rude Mechs' The Method Gun? It seemed that way to me, and please understand that invoking those creative names is the highest form of praise I can imagine.

But no, this was all the Frank Wo/Men Collective, the experimental movement troupe founded by Kelsey Oliver, working tropes of power and potential, of dominance and debauchery, of the alchemical shifting of personhood and presentation of self – working those tropes in an area (let's call it a stage) defined by enormous plastic curtains on three sides and a floor that could double as a supersized version of your childhood's summertime Slip 'N Slide, right there in the middle of the Blue Genie Art Bazaar space.

Dancer Billie Rose Secular served as the waterspray-wielding instructor/dominatrix of a group of five participants – Alexa Capareda, Erica Saucedo, Travis Tate, and co-directors Roberto Di Donato and Oliver – who were assigned tasks – odd, sometimes mildly torturous, often erotically tinged and deliciously kinky tasks – to perform separately or together, in the name of sparking whatever transformation each of them was seeking in their lives. This group was wrangled with the help of a chorus of watchful, often singing shepherds (Cassie Reveles, Khali Sykes, and John Christopher). And the whole thing –

Oh, I can't even. The synced-up group dance numbers. The near-constant, Rosalyn Nasky-level individual movements and twitchings. The costumes – thoroughly practical and yet simultaneously fetishistic – and the removals of those costumes. The bright colors popping the rubber-duck-themed design among those towering and water-halting sheets of white plastic. The way that mistress with the sprayhose would randomly, with an imperious gleam in her eye, target the audience. The myriad uses of water as friend, as enemy, as material and medium. The whole of it at once – always moving, always inventive, always a delight for the eyes and a frequent tweak of something glandular.

Did I say "Rubber Rep + Rude Mechs" above, straining for a viable comparison? Also imagine "Matthew Barney + the Marx Brothers," and maybe, if you have one, fondle your cremaster muscle for a second or two. Or don't just imagine it. Instead, because this show, this iteration of this show, is over, make sure that you see whatever the Frank Wo/Men Collective decides to do next. Regardless of context, I reckon it'll be – for everyone there – transformative.

Frank Wo / Men Collective's Virtual Show Offers a Warped Sense of Control
In K ! :D D: Ö, you get to not only watch these kinetic provocateurs move through virtual environments, but also influence their actions