Austin Playhouse's The Book of Will 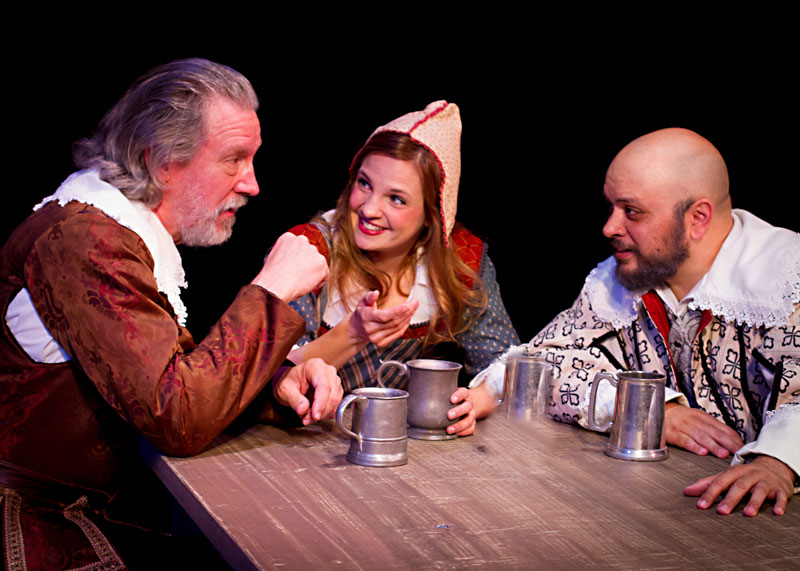 (l-r) Huck Huckaby, Marie Fahlgren, and Ben Wolfe in The Book of Will (Photo by Lara Toner Haddock)

If you're like me, you've at some point wondered how William Shakespeare's works survived for centuries, becoming staples of theatre companies the world over. In keeping with the playwright's flair for drama, the tale of these stories' preservation is an engaging narrative all its own, one which Austin Playhouse stages with ample amounts of heartbreak and camaraderie in The Book of Will.

Set seven years after Shakespeare's death – a time when cheap imitations bastardize his work ("To be or not to be, ay, there's the point") – the play follows Henry Condell and John Heminges, surviving members of the playwright's theatre company, as they undertake the daunting task of publishing the first official collection of the author's plays. Predictably, playwright Lauren Gunderson's script celebrates the legendary creative's work and legacy, though beneath its surface lies a deeply human meditation on friendship and loss.

This show's heart comprises many elements, not the least of which is fluid staging. Director Lara Toner Haddock's quick, purposeful blocking spurs sharp moments of physical comedy while mindfully structured levels evoke a Renaissance painting's depth. To that end, The Book of Will is a visual treat. Costumer Buffy Manners' intricate pieces, illuminated by lighting designer Chris Conard's pungent sepia tones, imbue each scene with an Old World warmth.

Character relationships feel most subdued between protagonists Huckaby and Wolfe. Showing directorial restraint, Haddock graces her leading men with a professional dignity. When these seasoned thespians reminisce on productions (and friends) past, it's as co-workers rather than lifelong friends. When Henry offers John solace after a great loss, it's from a respectful but nonetheless sincere distance. The breaking of this emotional boundary is felt viscerally as Heminges gives in to emotion, embracing his colleague in grief.

Though unseen, the influence of Shakespeare himself looms over the play. While his literary prowess is praised by fans of his work, the blunt recollections of a former mistress, an estranged daughter, and a professional rival piece together a mosaic of a complicated and flawed artist.

Ultimately, Austin Playhouse's season-closing offering exhibits a metatextual quality. Its lead characters seek to preserve these plays because they're more than just entertainment; they're vessels through which complicated emotions are processed and understood. On the backs of its players' genuine connections, The Book of Will arguably achieves the same goal. Baked into the outlandish characters and period-appropriate visuals are themes of love and loss that, like Shakespeare's plays, feel timeless in their universality.

The Book of Will