An Evening With Chlane at ColdTowne Theater

In a light, enjoyable sketch show, comic couple Chloe and Lane Ingram show the cost to intimacy with just one person over others 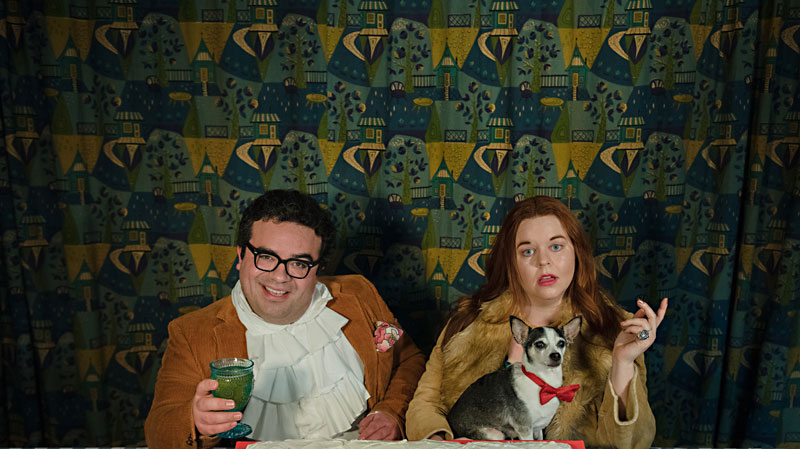 When contemplating An Evening With Chlane, now in production at ColdTowne Theater, you might ask yourself: What is a Chlane? Chlane is the amalgamation, the brainchild, the literal third entity formed by co-writers and co-marrieds, Chloe and Lane Ingram. Like so many wedded couples, Chlane has found themselves no longer just two individual people, but also now this other married thing that, through their comedy, they are attempting to understand and explore. While not every joke hits, ultimately, through the jovial and inviting nature of the couple, I find myself wanting to hang out and get to know them better.

The show opens with the Chlanes embodying Those Typical White People, who went on a cruise to the Caribbean only to discover various native spiritualities, usurping them, and making them their own. The duo weaves onstage burning sage and clearing the room of "negative vibes," calling to Jah and "Great Mother Gaia." We instantly know those people. Like many of the other Chlane characters – such as a pair of newlyweds confronted by two longer married couples who attempt to best them – these personalities are familiar to us. We've either been them or tried not to be.

Some skits land funnier than others. I chuckled at the couple who wanted to fill their Friday evening with a Game Night, only to discover the "friends" they want to ask over aren't friends at all, but acquaintances. In parceling out how they could invite these other people over, the Game Night hosts realize they've collectively lost a crucial skill: They no longer know how to make friends. Call it being older, or married and too involved with just each other. Call it merging into that third entity that's happiest ordering in Indian and watching TV, if they can ever agree on what show. Chlane is pointing out that, in marriage, we both gain some things, but we also lose some things. There is a cost to intimacy with just one person over others. But these two are having so much fun, who cares?

Lane, the male member of the duo, bears a striking resemblance to the grinning lothario Horatio Sanz and is, when all is said and done, still a real dude at heart. Chloe, beautiful blue eyes and an uncanny ability to fold towels with her toes, is still but a chick. Frictions occur within and around the characters about these gender differences. Lane may not be the typical football type – he prefers Point Break – but he's never going to agree to yoga and The Real Housewives of Anywhere. In other words, gender here is still a division that divides, despite the obvious close nature between the two. They work, write, and act well together. Unnecessary face-sucking aside, the show is light and enjoyable, even if not an ever-rolling laugh riot. I would watch these two on their own sitcom or web series. But since that's not an option, you'd better check out the Chlanes at ColdTowne before they're off to Game Night.