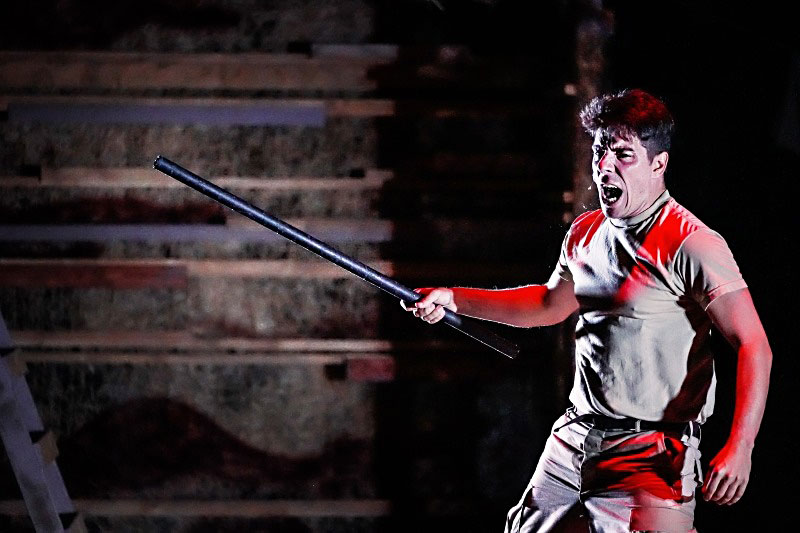 Henry V is onstage, and it's time for war. Six actors make up the cast in Penfold Theatre Company's condensed version of Shakespeare's famous historical play, led by Joseph Garlock as a King Henry who is hellbent on conquering France. It's a digestible production of an action-filled story.

Director Liz Fisher has chosen a contemporary military theme for this Henry V. The cast members wear desert fatigues and perform on a multilayered set made of scaffolding and camouflage (designed by Ia Ensterä). No real guns, but the actors do have objects they use as guns, and they carry military-style work knives.

Henry has only recently risen to the throne, and France is taunting him. And really, poor France. Nobody does a better job of mocking the French in performance than the English. That's been true now for centuries, and a few scenes in Henry V place Shakespeare squarely within a tradition that leads right up to those pointy-helmeted, pencil-mustached fools at the top of the castle walls in Monty Python and the Holy Grail. It's hard for a director to escape the visual.

So Henry invades, because that's what you do when someone insults you by sending a shipment of tennis balls. He sails over, bringing with him an army representing a cross-section of England. Through sheer dint of will, this force destroys the French defense over the course of three acts.

Henry V has been described as the play in which Prince Henry fully comes into his own. For all the chest-thumping, it's also a play in which Henry masquerades as a commoner and hears the doubts of his troops firsthand. True, it's cringeworthy to hear Henry give God credit for the lopsided casualty numbers favoring the English, but at least the French perspective is present in the ambassador's visible horror as the numbers are recited. The stark patriotism is also balanced, sort of, by the perspectives of the common soldiers, whose resentments are given voice centuries before World War I crystallized them for everyone.

Penfold has gathered a strong cast for its summer show. The six members of the ensemble have their work cut out for them in covering dozens of roles. Their dialect work is admirable, and their physical choices are clear. Amelia Turner as Catherine and Zac Carr as Alice are especially delightful in scenes that offer a nice comedic breather from all the fighting.

And oh, the fighting! Toby Minor is one of Austin's most qualified fight choreographers. It's true that we're coming off Game of Thrones and its 90-minute combatfests, but as good as these fight scenes are, they go on a bit long. They also highlight some aesthetic confusion, as soldiers in camo battle it out over a soundtrack of clanging swords. That, and touches like Henry's bandolier-crown, make it unclear if these are modern soldiers who are also actors putting on Henry V, or modern soldiers fighting it out with some random medieval elements on hand.

Overall, the production succeeds in telling its epic story of military conquest. It's a hefty play made accessible for a summer evening. 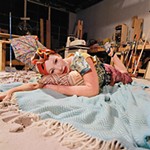 Top 10 Creative Things I Lucked Into in 2014
In 2014, reality and fantasy battled it out in theatre and art that was equally exquisite and unnerving 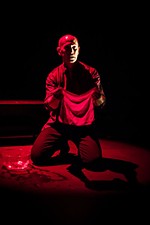