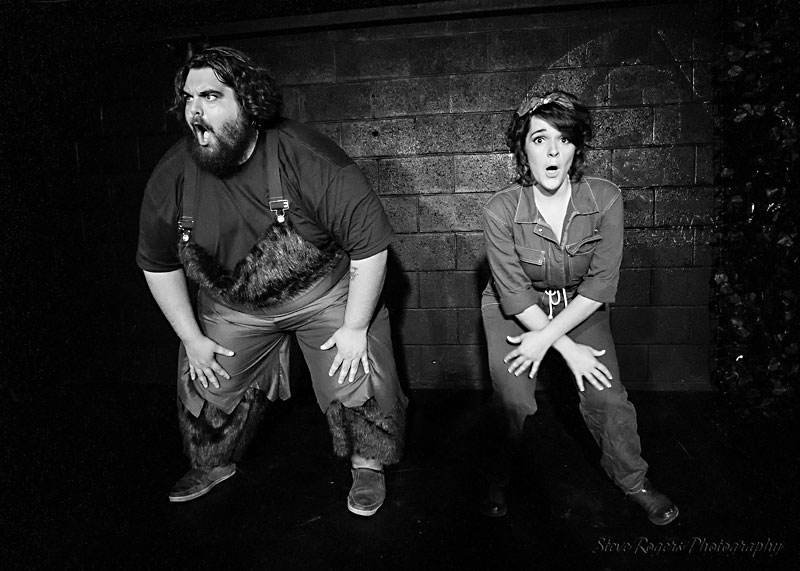 Despite what History Channel's MonsterQuest would have you believe, Bigfoot isn't to be feared; he's simply misunderstood. I, for one, feel for the guy. Life can't be easy when folks have made a national pastime out of hunting you down. In an age marred by ignorance and fear of the unknown, maybe it's time we heard him out.

Curious thrill-seekers can find the beast starring in ColdTowne Theater's production of Bigfoot, The Musical. True to the monster's elusive nature, this is but the second time the comedy has been staged since its 2018 premiere. Conceived and co-written by Late Night With Seth Meyers writer Amber Ruffin, Bigfoot recounts the titular creature's origins as an 8-year-old boy with a serious glandular problem. Despite his kindhearted disposition, he's scapegoated for the financial woes of his backwoods hometown of Mud Dirt, becoming the target of an angry mob led by a perpetually drunk mayor.

The script by Ruffin and Kevin Sciretta takes our current political climate to task, blatantly laying out the perils of demagoguery and intolerance. When the mayor (donning both a sash and a crown) implores the townsfolk to "stop listening to reason and start listening to me!" one wonders why these conversations are still so relevant in 2019.

Leading a cast of improvisers-turned-actors, Michael DiChello brings a naive sincerity to Bigfoot himself. As his sickly mother Francine, ColdTowne instructor Tauri Laws-Phillips displays an offbeat humanity in a town populated by violent idiots. Each performer exhibits a unique sensibility, a fact most apparent in the townsfolk chorus scenes. Here, over-the-top physicalities volley the audience's attention between individual characters like a hot potato.

Ultimately, this one-act musical succeeds through the ability of directors Will Cleveland and Dave Buckman to corral improv-minded performers and tune their comedic frequencies to a scripted presentation. As if they're saying, "Yes, and ..." to the script itself, actors move by the cues and energies of their castmates rather than predetermined line deliveries, resulting in naturally flowing humor.

As mayor, Kyle Romero turns nearly every line of dialogue into a laugh via astute timing. With his rapid-fire delivery, audiences often find themselves still enjoying a previous joke as another, even funnier one lands. (It's a queer feeling to find yourself in hysterics without being certain which individual joke you're laughing at.) This isn't a flaw so much as it is a reason the play warrants multiple viewings: With so many effective moments crammed into a 1-hour run time, you'd hate to miss one.

Leaving Bigfoot, I felt that ColdTowne's creatives had done Ruffin's script justice and then some. Not only are the laughs plentiful, but its heavy-handed message of tolerance is louder than ever. Given its writer's growing popularity, I can see this one-act continuing to be performed by companies throughout the country, perhaps on a larger scale with a greater budget. Personally, I'd recommend catching this particular showing. After all, monster sightings are rare. You should make it count.