About to open a new play at Zach Theatre, the Tony Award-winning playwright talks about what endures 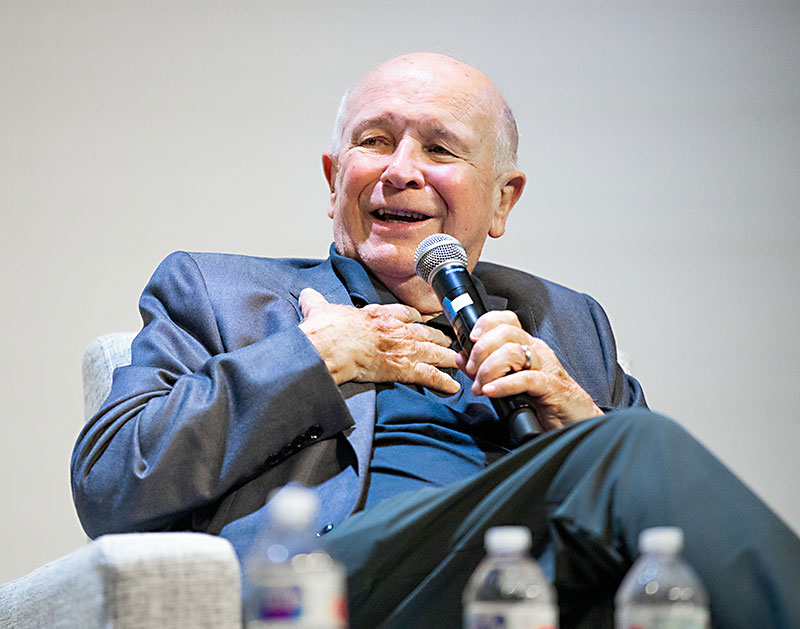 To say that Terrence McNally is closing out this spring with a busy schedule is a bit like saying Maria Callas had an okay voice.

On May 19, the Tony Award-winning playwright of Master Class and Love! Valour! Compassion! received a Distinguished Lifetime Service Award at the Broadway League's Spring Road Conference. The following week, he celebrated the opening of Frankie and Johnny in the Clair de Lune, a new Broadway revival of his 1987 play, starring Audra McDonald and Michael Shannon. This Sunday, he's one of three artists being given a Lifetime Achievement in the Theatre honor at the 2019 Tonys. On June 14, Jeff Kaufman's 2018 documentary Terrence McNally: Every Act of Life will air on PBS's American Masters series. McNally has also been making time to talk to a host of media outlets about all of the above. And somewhere in there, he's been putting the finishing touches on Immortal Longings, a play having its world premiere at Austin's own Zach Theatre on June 20.

It's telling that at this moment of his life, in the midst of career achievement honors and 80th-birthday galas, McNally's working. He'd be justified in just taking victory laps around Broadway, but instead this writer is taking Fire and Air, a play that already had its New York premiere with an all-star production team typical for a McNally work – actors John Glover, Marin Mazzie, Marsha Mason, Douglas Hodge; director John Doyle; et al. – and working at making it better. He's rethinking it, revising it, making changes to it to such a degree that he considers it a new play. And he's doing it not in New York, the beating heart of the American theatre, but deep in the heart of Texas.

“Nobody loves the theatre as much as Terrence.” – Nathan Lane

But that's how it is with someone who lives for the stage. "Nobody loves the theatre as much as Terrence," insists Nathan Lane in Every Act of Life, and the film shows us that it's always been that way with him: as a child being dazzled by Ethel Merman in Annie Get Your Gun and Gertrude Lawrence in The King and I in their original Broadway runs, singing along with his parents' original cast recordings when they lived in Corpus Christi; and as a student at Columbia spending several nights a week going to see plays in New York, standing outside all night to get a standing-room ticket to the sold-out original run of My Fair Lady. When you love theatre that much – enough to have given the stage 55 years' worth of material (three dozen plays, 10 musical books, and four opera librettos) – and when, as McNally says of himself in the documentary, "I still get excited when the curtain goes up," why stop just because you're 80? 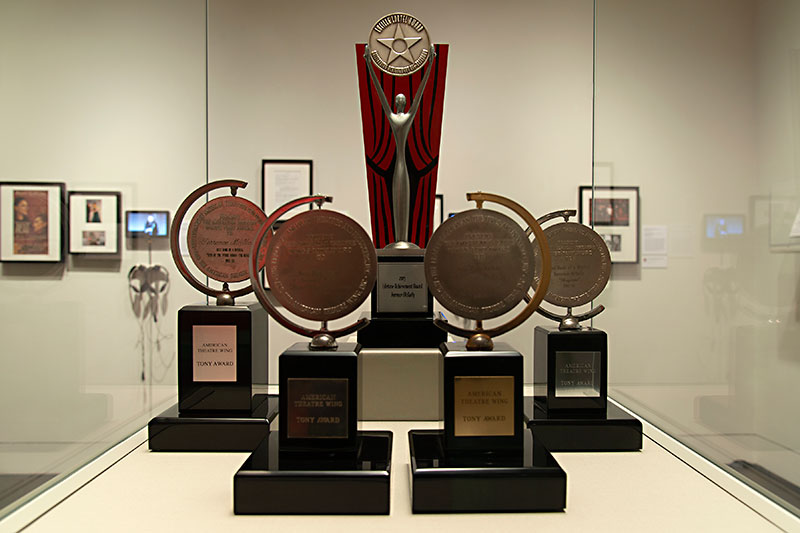 So Terrence McNally is once again in the theatre, doing what he does best: bringing characters to life and delving into their passions and pains, what they desire and what moves them, what makes them laugh and what makes them cry. In this case, the characters are historical: Sergei Diaghilev, the founder-impresario of the Ballets Russes; and the company's fiery choreographer/star, Vaslav Nijinsky. That places artistic work at the center of the play – a recurring motif in McNally's work – but rather than focus on the artists (as he did with the diva Callas in Master Class, the opera composer Vincenzo Bellini in Golden Age, and the fictional thespians in It's Only a Play and And Away We Go), McNally wanted to zero in on the one person in a collaborative creative pursuit who isn't an artist; the person whose talent – often indispensable – is to assemble the right people for the creative work being made. "Because if you don't have the right people in the room," says McNally, "the painting, the symphony, the play, the ballet, are not going to turn out as well as they might. The history of art is filled with plays and operas and symphonies that were performed maybe badly or ahead of their time." Such was not the case with the Ballets Russes. The impact of the artists assembled by Diaghilev is still felt a century later.

Impact is something McNally knows personally – perhaps on the cellular level. There's the impact of theatre, which has been his North Star, providing direction for him his entire life. And the impact of a high school English teacher, Maureen McElroy, who really "got" this teenager whose parents had no real clue why he would be staging operas in the garage and were in denial about him being gay; her appreciation and encouragement of his writing can't be understated. McNally thanked McElroy when accepting his Tony for Master Class, dedicated plays to her, and flew her to New York City – in first class – for the opening of the 2003 revival of Frankie and Johnny. Such shows of gratitude 30, 40, and 50 years into his career reveal a deep recognition of her impact.

With that in mind, the Chronicle sat down with McNally to discuss the impact of art: how he's felt it in his own life, what it can mean in society, and whether he feels his work has had an impact. The conversation took place last October, when McNally was in Austin for an 80th-birthday gala event thrown by Zach and a screening of Every Act of Life at the Ransom Center, which holds McNally's archives. To see more of the interview, visit austinchronicle.com/arts.

Austin Chronicle: I'm curious if you can recall the first experience you had where you personally felt art's impact on you.

Terrence McNally: The very first time, probably, was about the sixth grade. I was in parochial school and the nun brought in a Victrola and said, "Children, I'm going to play opera for you." And she played an album of Puccini love duets, and I loved it right away. I was the only one of the 30 [students]. The other 29 started spitballs or sleeping or misbehaving – had no interest. Just the minute I heard it ... 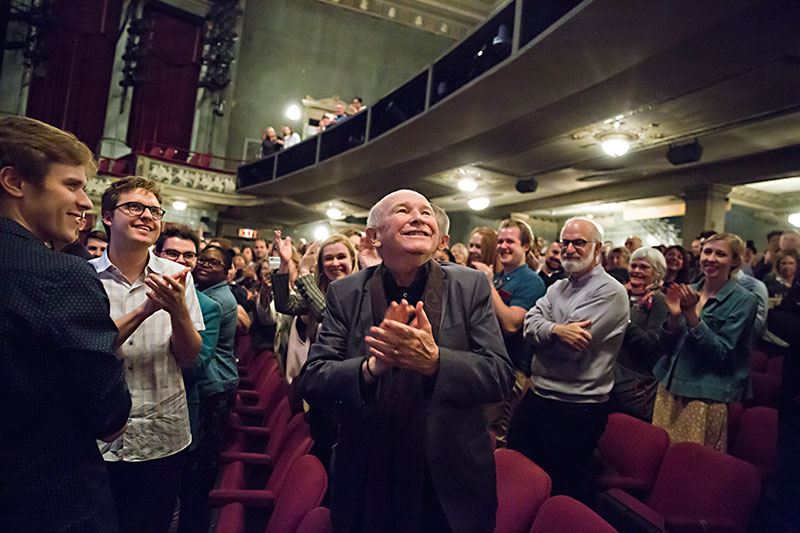 Some people say to me, "How do you learn to love opera?" I say, "It's like ice cream. You don't learn to love ice cream. You like it or you don't." I still don't like calf's liver. I just turned 80, and I'm so tired of people telling me, "You'll love this calf's liver." I just don't like the taste of it. It's okay not to like liver. But I think most people are touched by art, because it's a taste. The earlier it happens, the better. I'm always happy when I see kids, young people, at the theatre – I'm just going to talk about theatre today, but the same would go for a concert or a ballet or a museum. I think young people today are getting less exposure to the arts than my generation. I'm totally a product of the Texas school system. You had to be in a youth orchestra whether you wanted to or not. You had to take art lessons. You had to do all this stuff. Maybe one out of a hundred went on to earn a living doing design or being a musician, but we were exposed to trying to draw a line that represented a human being or a cat. We tried to assemble notes into a melody. We learned to work together and follow the conductor. It's all part of making you a better human. I think the arts make us better human beings.

The play that probably has most of my views about art is Master Class, and for a while I thought it was my most autobiographical play, even though I'm not a singer. My mother thought the play was about her. Most people, fortunately, think the play is just about Maria Callas. And art. Teaching. I'm a terrible teacher, I think. I think she's not a good teacher in the play. Teaching is – a good teacher lets someone become who they really are, discover themselves, not "do it my way or the highway." I'm more of that school [laughs].

AC: So in line with this idea of writing about yourself, is there any of you in Fire and Air?

TM: Diaghilev, mainly. But I've never written about myself autobiographically – emotionally autobiographically, but I've never written a play about my mother and father and brother, and I doubt I ever will. I certainly understand why [Eugene] O'Neill waited until the end of his life to write Long Day's Journey Into Night and then didn't want it performed in his lifetime.

AC: A number of your plays have been done in Austin, and I've seen the impact they've had on the people who saw them, including myself. You're in a very celebratory year where people are asking you to look back on your career. Do you feel that you've had an impact through your body of work?

TM: Yes, I feel my work has mattered, and that's very gratifying, and maybe it's good to wait until you're more advanced in years to look back and say, "Have I participated significantly in the national conversation, [in] what kind of country we're going to be?" And you affect people in ways you sometimes don't expect. So many people have told me what an impact Master Class had on their lives. And they're lawyers, doctors, they're not opera singers. What price are you willing to pay to be the best lawyer in Austin, the best doctor in Austin? Maria Callas wanted to be the best singer in all opera. She had talent, but you pay a price, too. One woman came to me and said, "You changed my life. I saw the play, and I'm just a secretary, and I thought, 'Why am I working for Aetna Life Insurance?'" And she went and got a job as a secretary at Lincoln Center. She's not in the arts but is helping make art, and I love that. A mother and father saw a play of mine, and [in the past] they had asked their son and daughter – both [of] whom identified as gay – to get out of the house by the next morning. Hadn't spoken to either one in close to 10 years, and then after seeing this piece, called them both, and they were at this new play with the son and daughter. That's very one-on-one, but it's very powerful. More powerful than winning a Tony Award, I'll tell you that. They're both nice, but one matters in a way. 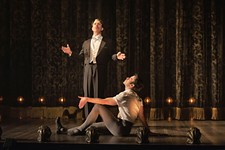 Immortal Longings at Zach Theatre
In this new play by Terrence McNally, Diaghilev and Nijinsky seek revolution and godhood in the 20th century 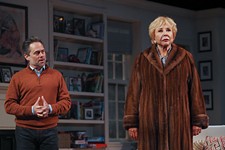