Zach Theatre's The Ballad of Klook and Vinette

In tracking one couple's affair, this production shows us how love is an imperfect art 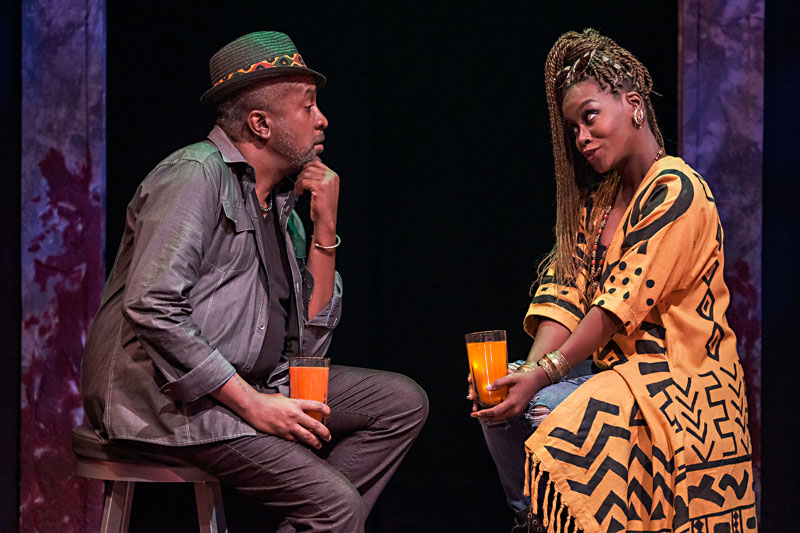 Our scene opens on an organic juice bar. (Austinites know the type.) Enter Vinette, a young woman with a stride so confident, it cues a smooth bassline. Taking notice is Klook, a handsome if tired-looking man in his 50s. Bearing two beverages, he moves to sit beside her. "How do you know I like carrot juice?" she snaps. The electricity between their locking eyes lights up Zach Theatre's Kleberg Stage. "Because I know your every need before you do," he fires back in his heavy baritone. It's this encounter that ignites a romance both passionate and tragic in playwright Ché Walker's new musical, The Ballad of Klook and Vinette.

Equal parts freeform poetry piece and soulful duet, this Ballad portrays a relationship as it is remembered: fantastic and intoxicating. Whether playing out scenes set in the past or directly addressing the audience in the present, the titular couple tells their story together. Unlike similar personal narratives utilizing this frame (which suffer from narrator's bias), these two hold themselves accountable, correcting each other's memory several times throughout the piece. As a result, the show comes across as the experiences of real individuals more than it does a fabricated tale.

Against the backdrop of scenic designer Scott Groh's minimalist set, the production staged by Artistic Director Dave Steakley feels extravagant. Reflecting the excesses of infatuation, Walker's prose paints a colorful world of tenderness. Take, for example, the moment when the partners describe their intimacy mid-coitus. Their words spark the imagination while simultaneously leaving nothing to it ("violently in love and tripping out on the oneness ... like we were long lost twins crawling back into the womb of our own desire"). Fleshing out Walker's book is original music by British soul singers/songwriters Omar Lye-Fook and Anoushka Lucas. With each writer composing the music for one character specifically, our protagonists develop distinct, clashing sensibilities.

Shouldering the burden of combining these elements are actors Roderick Sanford and Chanel, whose effortless chemistry is the reason this production succeeds. As Klook and Vinette break down each other's emotional barriers, these performers aptly portray two sides: one shown to the world and the other kept locked away. Playing off Chanel's warm presence, Sanford communicates well the pain and joy that masculine Klook finds in being vulnerable. Similarly, Sanford's affability inspires playful energy within Chanel's Vinette as she reclaims her creative spirit.

It is because they're imperfect while still inspiring the best in each other that this duo is endearing. Like the characters themselves, I found myself believing that something beautiful can last simply because it's good. Though it's clear from the start that tragedy is inevitable, we want nothing more than to see this relationship prosper. Therein lies the point of The Ballad of Klook and Vinette: Love is an imperfect art. It is messy, irrational, and often painful – but when lost in its throes, not a damn thing can be done to change that. To quote Vinette, "When it clicks, it clicks."

The Ballad of Klook and vinette