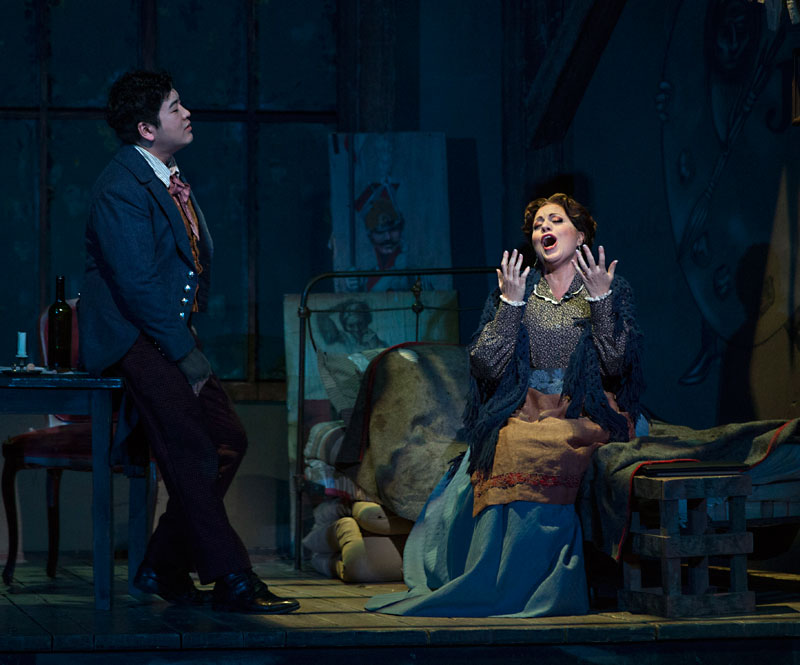 Did you see Avengers: Endgame last weekend? Get that out of your system? Good. Now, in order to rebalance Thanos' dismembered universe, how about a night at the opera?

If you, like me, haven't attended many operas, you may be more familiar with La Bohème from its narrative doppelgänger, the 1990s musical Rent. In La Bohème, Austin Opera's current production, two down-and-out artists/roommates, Marcello (Noel Bouley) and Rodolfo (Kang Wang), live in a slum apartment where they have no money to build a fire, much less pay their rent. On Christmas Eve, their friend Schaunard (Andrew Lovato) makes some much-needed coin by playing/poisoning the King's annoying pet to death. He offers to take his crew out on the town, but Rodolfo stays behind, encountering the tender, consumptive Mimì (Elizabeth Caballero), who begs him to light her candle in the dark winter night. They fall in love.

Jonathan Larson's Rent, of course, was populated by gay hustlers and drag queens and heroin addicts, not just the bohemians we encounter in Puccini's opera. However, both works cover similar themes: the great price of attempting to make great art; the value of poetry in a landscape of poverty; and, mostly, love. La Bohème is a story that examines the extremes of love and devotion. Rodolfo, because he senses Mimì's impending death, grows cruel to her, picking fights over minor jealousies rather than taking a chance on losing her. Marcello reunites and again parts with his on-again, off-again girlfriend, the petulant drama queen Musetta (played in captivating style here by Susannah Biller). Musetta, like Rent's Maureen, tortures her lover, preferring instead to turn the heads of other suitors; a flirt to her bones. I all but expected her to burst out, "So take me, baby, or leave me!"

Because Austin Opera's production is staged at the Long Center, during the two intermissions, the audience slowly wanders out onto the H-E-B terrace, Cabernet in hand. But though it was 85 degrees on the patio, inside onstage, it was winter. All through Act III, a gentle snow falls on Michael Yeargan's exquisite set. This type of multidimensional stage dress that uses fore-, middle-, and background so beautifully is another reason to buy a ticket. The suspended, lonely cube of the garret against the backdrop of gray Paris sky. The garden outside a home whose metal gate cuts diagonally across the lawn, all under that gently falling snow. The beauty of stagecraft and the drama of music transport us.

When, finally, we return to the garret in Act IV and Mimì dies crying for a warm, winter muff, we've learned something about love and art. Mainly, we've felt something. Vain Musetta sells her earrings to buy what Mimì needs, but tells her instead that they were purchased by her love, Rodolfo, helping her die in peace.

I guess I should've said "spoiler alert." Then again, this isn't Avengers: Endgame, so I don't imagine you'll mind.