Conceptual artist brings "Hi, how are you, Gonzo?" to the Contemporary Austin 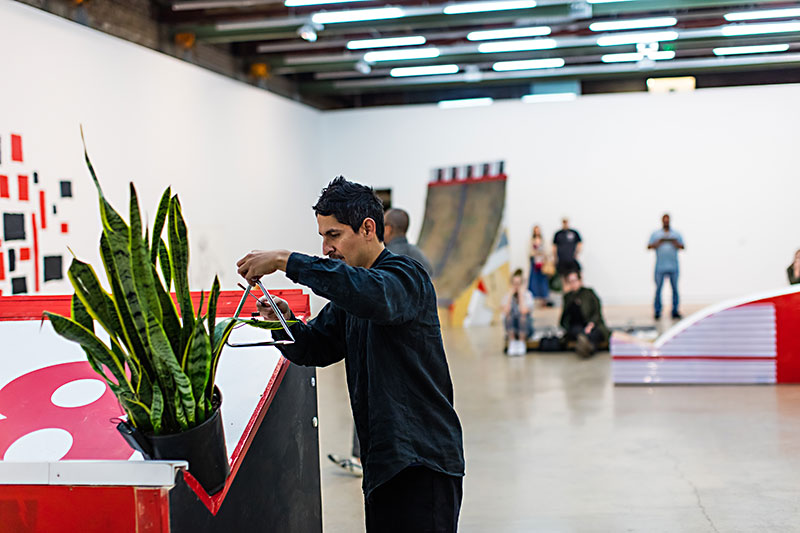 In Abraham Cruzvillegas' "Hi, how are you, Gonzo?," now at the Contemporary Austin, visitors are encouraged to get up close and explore each piece – something more common at a science museum than an art exhibit. It is the rare treat to so openly interact with an artist's work, resulting in one small dilemma: You might step on the art (and sit on it, too).

An evolving sculpture of broken tiles and beer caps has taken shape on the floor near the entrance, for instance, and a rogue garlic bulb rests on the ground, right where one might stand when reading Cruzvillegas' ode to Austin, Keep it weird, scrawled on the gallery wall. When the artist himself is to blame for such a happy mess, trying to tidy it up suddenly illustrates the very point of his work.

"I am an animist," Cruzvillegas explains as we chat at a table garnished with books suspended from wire. "I'm not New Age, I'm not religious, but the chair you are sitting in is alive and has an opinion." I shift a little in my seat, made of salvaged two-by-fours and Styrofoam (which, incidentally, offers excellent lumbar support). Pointing to the literary mobile, I ask Cruzvillegas which writers, since he is a writer himself, have most impacted his work. He names many, including Langston Hughes and William Carlos Williams. Being from New Jersey, my ears prick up: "You're drawn to poets from the Northeast?" 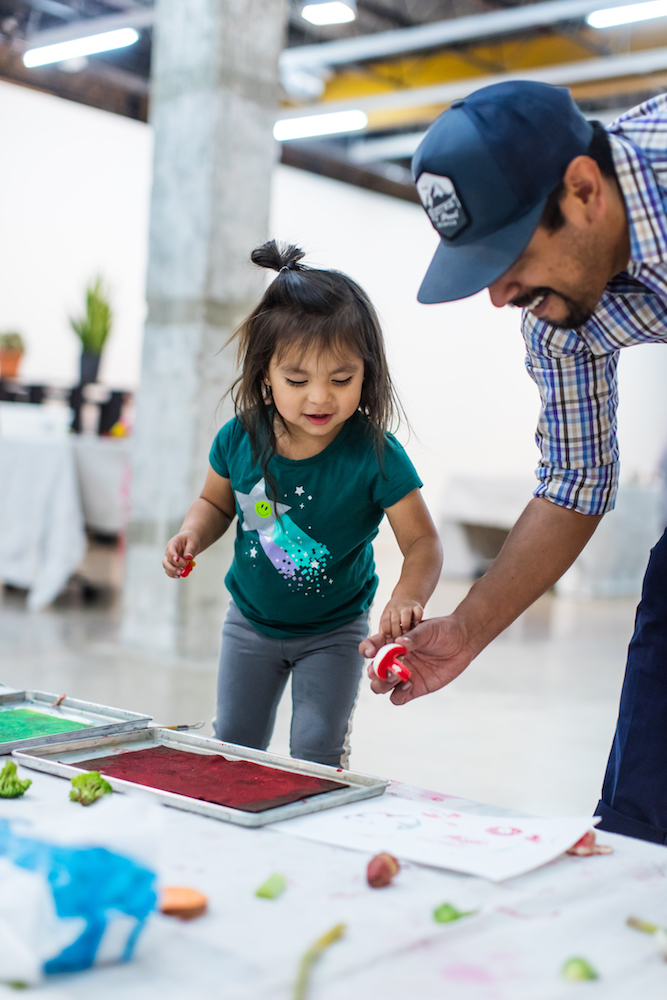 "Borges, also – so the Deep South," he quips. It is not surprising that the Argentine writer comes up, as well as other South American artists, given the natural intersection of art and activism within the Latin American context.

Cruzvillegas grew up in the Ajusco neighborhood of Mexico City, which he describes as a "sprawling slum" and where autoconstrucción ("self creation") was a way of life. Through sheer resourcefulness and collaboration, his community built itself without any real funding or stability (it rests on volcanic rock) from discarded objects which became the bones of buildings and the soul of its architecture. Out of necessity came a highly creative and adaptive approach – which clearly informs his own application of these techniques.

Much of this solo exhibition is, in fact, made up of recycled materials collected from the Contemporary and Aspen Art Museum (where the show travels next), repurposed in the spirit of autoconstrucción. Plastic crates, pieces of painted and unpainted wood, Styrofoam – detritus' usual suspects – all accounted for in these furniture-esque installations. One rather asymmetrical table, made from a milk crate and scraps of wood, reads ASPEN MUSEUM, its Sharpie lettering partially covered by a houseplant perched on its more stable end: proof that the two museums worked together in hauling junk across state lines.

What also links these cities in "Hi, how are you, Gonzo?" is the show's title itself, a reference to Austin's Daniel Johnston and Aspen's late, great Hunter S. Thompson: two oddball heroes who epitomize each town's unique flavor. Referencing such disaffected cult figures perhaps reflects how Cruzvillegas, an internationally renowned conceptual artist, feels in his own surroundings – both locally and globally.

He's clearly interested in what makes a particular place tick, and by inviting artists, performers, educators, and other community members to take part in this show, Cruzvillegas has facilitated, on a local level, an exchange of ideas and aesthetics without the usual confines that separate artists from their audience. Cruzvillegas shies away from the term democracy when describing this organic process, preferring a less political, more universal, word: horizontal.

"I'm not against democracy, but I think it's just a fantasy," he explains, later adding, "There is a horizon in which everything is the same, where we all deserve respect."

Cruzvillegas is a participant in his own exhibit as much as he is the main player, instigating an ongoing experiment of improvisation: live performances, interactive workshops, a weeklong book swap, storytelling, and Roller Derby-ing.

In this way, Cruzvillegas is a participant in his own exhibit as much as he is the main player, instigating an ongoing experiment of improvisation: live performances, interactive workshops, a weeklong book swap, storytelling, and Roller Derby-ing – enough stuff to keep you occupied until its closing in mid-July. When I inquire about the importance of these scheduled events, or "activations," he is quick to clarify that the exhibit itself is teeming with life all the time. Plants, for instance, are displayed throughout the galleries, as well as strategically placed potatoes, ginger, and the aforementioned garlic.

He checks the time: An activation is about to begin. We head to the second floor just as a sound artist – a guest percussionist from Mexico City – slowly glides through space, guided by the incessant clang of his own triangle. A small crowd has gathered, including a woman who places her toddler on a plastic crate adorned by knobs of ginger root, momentarily transforming the sculpture into a tiny throne. The musician picks up the pace, seemingly in tense conversation with a potted plant inches from his face, an experimental and quirky move which amuses the audience, including Cruzvillegas.

Some weeks after the opening, I return to see what contents may have shifted, if the garlic bulbs or bottle caps have nomadically moved to another part of the gallery (they have), and if I'll happen upon some impromptu activation (yes, a local high school music performance). The ink-on-paper primates hanging in the galleries are more evident to me this time around, and the fledgling animist within wonders if they, too, are digging the exhibit.

Over at the floating library, the same batch of books is still stylishly suspended – one of the few installations that has stayed put – including Cruzvillegas' art catalog from his 2018 show "Autorreconstrucción: Social Tissue." I recall our earlier conversation: "This is from a previous exhibition I did in Switzerland last year," he announced while plucking his paperback from the air. "It's kind of similar to this one, but absolutely different, of course."

“Abraham Cruzvillegas: Hi, how are you, Gonzo?” is on view through July 14 at the Contemporary Austin – Jones Center, 700 Congress. For more information, visit www.thecontemporaryaustin.org.

A version of this article appeared in print on May 3, 2019 with the headline: The Same but Different 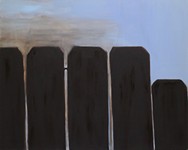