Rude Mechanicals' Not Every Mountain 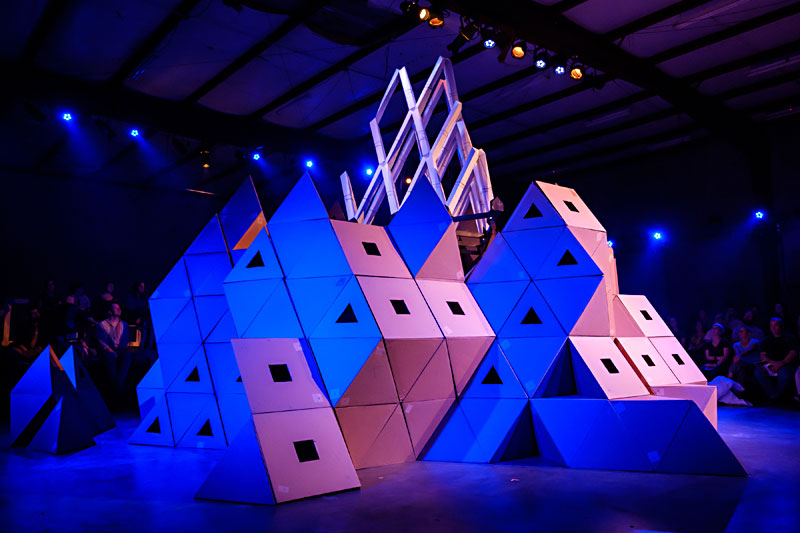 Not Every Mountain (Photo by Bret Brookshire)

Whether it is embraced or resisted, change affects all things. In our day-to-day lives, we often find solace in what appears to be everlasting: possessions, relationships, or Mother Earth herself. Within our short, turbulent existences, such comforts allow us to ignore the unpleasant fact that nothing lasts forever.

With their latest performance piece, the Rude Mechanicals theatre collective creates a broad portrait of time and nature. Approaching with irreverence that which we consider "permanent," Not Every Mountain dedicates the entirety of its hourlong runtime to the construction of a mountain, which is destroyed spectacularly in the final minutes.

Like the natural world it portrays onstage, Not Every Mountain is composed of many seemingly disparate elements. The main one is its "mountain," built from scores of cardboard penta- and tetrahedrons. Performers connect these shapes, slowly forming valleys and hills that eventually combine into one grand structure.

Throughout its relatively short life span, this mountain is acted upon by a variety of simulated outside forces, most notably weather. Actors wrapped in inflatable, cloudlike garments saunter about sensually, colliding with the formation. Others, carrying whiplike rope lights, spasm randomly to simulate violent lightning cracks. As if to emulate the detached mandate of nature, these performers wear blank expressions while carrying themselves with an eerie swiftness.

Creating the rhythm for their steady, inhuman movements is the music of Peter Stopschinski. Performed live on programmed synthesizers, Stopschinski's score includes scales built around the Schumann resonances (frequencies from the globe's atmosphere pitched up enough to be audible). Reaching every corner of the space, these bass-heavy tones create and mold an unsettling, dynamic atmosphere that feels strangely of-this-world.

Recited over the music and movement is a series of deep, personal ruminations on impermanence as it pertains to the speaker's own relationships, insecurities, and regrets. ("Not every mountain wants to be remembered for its behavior at parties all those years ago.") In the role of the speaker, Crystal Bird Caviel acts as a bridge between the text's personal subject matter and the centuries of history passing onstage. With her powerful, self-assured delivery, Caviel's reading plays more like spiritual incantations than intimate revelations – adding a touch of humanity to the events unfolding before us.

Together, these three elements – movement, sound, and voice – seem chaotic, and it's easy to get lost tracking one at a time. As with a collage, however, one's understanding of Not Every Mountain benefits from taking a step back to observe these pieces working in tandem. While initially appearing dissonant and random, these facets play off each other, creating an eclectic harmony. Stopschinski's live score energizes the performers' motions, and vice versa. Similarly, Caviel's cadence reflects the pace of the musical arrangements. This balance creates a jarring, free-flowing experience for the eyes, ears, and mind, one that echoes the ever-changing directive of the Earth itself.

Witnessing eons of growth in the space of an hour, we experience firsthand the mighty, unyielding force that is impermanence, and with it, the unsettling truth that nothing is unshakable. In the end, the mountain comes crashing down. Whether we welcome change or fear it, Not Every Mountain leaves us with the inescapable feeling that our lives, too, are slowly inching toward the same, inevitable conclusion. 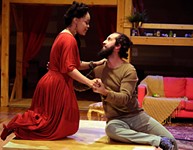