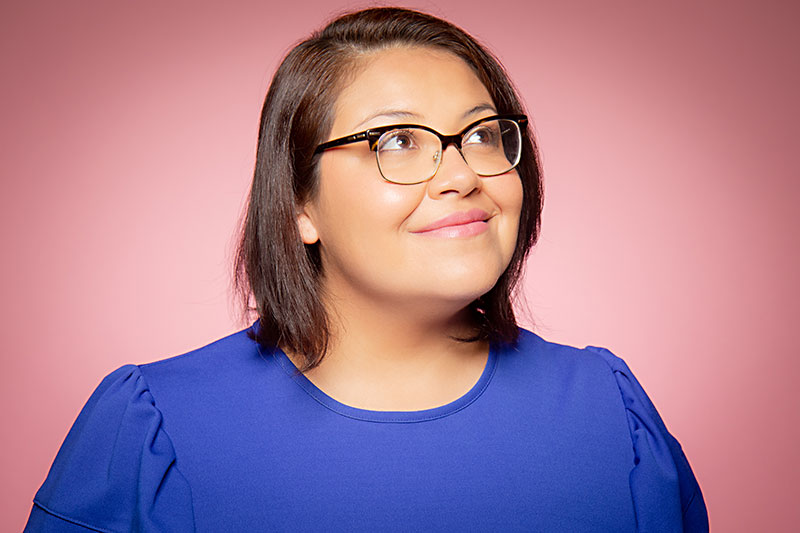 Every April, amazing comedic talent from all over the world descends on Austin, courtesy of the Moontower Comedy Festival. This year, we can all get especially excited, thanks to the return of comedian and forever Austinite Vanessa Gonzalez.

Now based in L.A., Gonzalez started her career in Austin doing sketch with the Latino Comedy Project. That led to an interest in improv and, eventually, to her current focus, stand-up. In 2017, she was voted Best Stand-Up Comic in the Chronicle's "Best of Austin" Readers Poll. She was drawn to comedy even as a kid, although taking the stage alone, with mic in hand, took some time. "Growing up, I loved watching HBO specials," she says, listing Chris Rock, Kathy Griffin, John Leguizamo, and Margaret Cho as "huge influences" and Def Comedy Jam as "the best thing on TV." "I remember being in, like, sixth grade and watching these specials and memorizing them," she says. In college, she studied theatre. She knew she wanted to perform but assumed she'd be an actor. "Comedy. Stand-up. I was always a fan of them, but it seemed so scary, I thought, 'I could never do that!'"

Moving primarily to stand-up was a process, and Gonzalez sometimes misses the creative outlets that improv and sketch provide. "With sketch, I feel like I pull from more absurd places. I let my imagination run wild. Because you're playing characters and you have other group members and scenes, you're able to get as absurd and wacky as you want," she says. "But with stand-up, you're talking with your voice. For me, my best voice comes from being truthful." Her kindhearted, relaxed style focuses on personal narrative – "I like to let the audience into my life" – and the largely autobiographical sets feature relatable stories refreshingly free of self-deprecation. "With my stand-up, I definitely try to be as honest and vulnerable as I can. That's just my type of writing style. I always pull from true, real things that have happened to me or my family, my friends, or my boyfriend." It makes for a show that gently pokes fun at our shared awkward moments. "It does get scary sometimes," she admits. "Especially if I'm talking about someone who's real. I'm like, 'Well, they're going to hear about this!'"

Before becoming a professional comedian, Gonzalez taught preschool for six years. Her sketch series, Ms. Vanessa, draws on her time teaching, and anecdotes have popped up in several sets over the years, including her set for the 2017 finals of the Funniest Person in Austin contest. "I loved working with kids," she says. "They're so honest, and the way they look at things is so genuine ... [Teaching] definitely influenced me as far as how I look at things. I miss working with kids and being around them all the time. The adults, not so much."

While Gonzalez is back in town for Moontower, she'll also be breaking big nationally, appearing in her own segment on the show Entre Nos on HBO Latino. "It highlights four Latino comedians," she says. (You'll be able to catch it in all the usual places, like HBO Go and HBO Now.) She also has a half-hour stand-up special on Comedy Central set to premiere this fall.

A version of this article appeared in print on April 19, 2019 with the headline: Real Funny