In the conversations of this Michael Frayn drama, we learn that history is broken, just like us 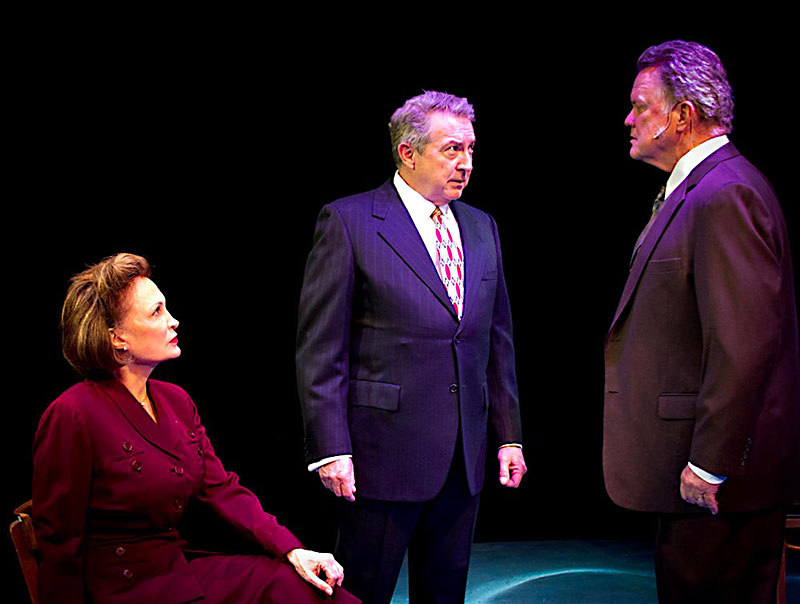 Sitting down in front of Michael Frayn's Copenhagen, now in production at Austin Playhouse, you confront a stark stage with three wooden chairs. The light pattern beneath is not just pretty stagecraft. As you focus your eyes, you see it is an intentionally placed atomic symbol, science and history, underlying the entire play. It's a persistent reminder of the weight of the story you are about to see – one that holds not just the known past in its grasp, but all other potential alternatives.

Physicists Werner Heisenberg (David Stahl) and Niels Bohr (Ev Lunning Jr.) and Bohr's wife Margrethe (Babs George) meet in this stripped-down afterlife to theorize on what happened one night in September 1941, when Heisenberg, a German, met with Bohr, a half-Jewish Dane, to ask about the moral responsibilities of working on "the practical applications of atomic theory" – in other words, weaponizing their research into an atom bomb, capable of killing hundreds of thousands of people in one bright and brilliant flash of light. The two scientists and former collaborators spent just 10 minutes alone outside the ears of the SS and Margrethe, Bohr's partner and muse, but the consequence of those 10 minutes, as Frayn lays it out, was the crucial factor in an Allied victory in the arms race that eventually won the war.

Like a good physicist, Frayn experiments and then drafts and redrafts his theories throughout the play. In one, Heisenberg is a hero, fighting to deceive the Reich and keep the atomic project out of the hands of more persistent scientists. In another, he's the preening protégé, come back to show off his power and success to his old mentor.

Frayn explores these notions while also explaining the history of quantum thought – Heisenberg's uncertainty theory, Bohr's theory of complementarity – as well as the human questions: the war, the devastation in Germany that led to the Nazi takeover, the evacuation in Denmark of 8,000 Jews, and even the death of the Bohrs' oldest son, drowned as he reaches for a life preserver always just outside his grasp. If it's hard to hold all these details in your head, think of Frayn trying to write them. What an accomplishment! Almost the equivalent of seeing through the structure and fabric of the atom itself – intellectual theory brought into the service of history, humanity, and art.

As difficult as the writing is, it's the performers who are charged with making it sing. It's almost a cliche that a play is merely a series of talking heads, going nowhere except where language can take them. Unlike a film, a play is stuck inside its own proscenium. The frame can't move around. There are no close-ups or cutaways to give the audience's eye a break. Copenhagen is the crystallization of that sort of "talking heads"-type play. It relies entirely upon its actors to bring a sense of motion. And here, they do bring it.

For all its beautiful intellect, Copenhagen is also a deeply emotional play. I not only understood the complex theories and situations, but at a critical moment near the end, I even cried along with Heisenberg for his lost and broken Germany, something I never thought I'd do. The playwright and the actors help us see the connection. We are all lost and broken. History itself is as well. Humanity, post-atom bomb, remains now perpetually at risk. The 10 minutes the two physicists shared may have saved Allied troops in that moment, but like a particle zooming through an opaque cloud, we can't know in what direction we are truly traveling now that this "practical application" of theory has seen the light. Copenhagen allows us to reflect on these critical questions and is more than worth the investigation.

A version of this article appeared in print on April 19, 2019 with the headline: No Fate But What We Make