This evening of works, performed outdoors at the Umlauf, mixed art, beauty, and nature in ways that enraptured 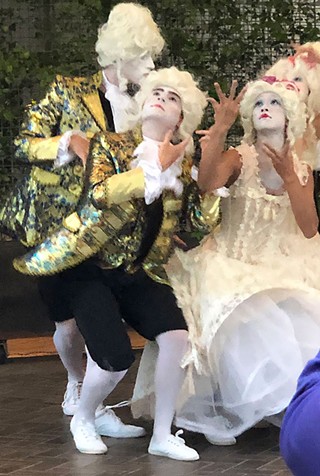 "Salt and Folly" from Confections (Photo by Laura Jones)

There are some advantages to my job, it's fair to tell you. Sure, I sit through a lot of questionable community theatre in moldy auditoriums. I've seen actors only Corky St. Clair could love. But every once in a while, I'm invited to an event that is not only theatre but an experience of something special. Live at the Umlauf's recent Performa/Dance night was just that sort of happenstance. The event, titled Confections, was not played in a proscenium but outside among the elements, on a cloudless night when all of Austin seemed to sing.

Confections consisted of four dance vignettes in two acts, performed against the stone artwork of the Umlauf Sculpture Garden & Museum. Following last week's windstorms – and contemporaneous to my Midwest friends Facebooking about "thunder snow" – the early evening at Umlauf was remarkably clear and blue. A silent auction was laid out on tables, surrounded by edible confections: donated lemon lavender cupcakes, chocolate-covered strawberries, and delicate macarons the shade of Easter eggs, all free for the taking. With a glass of red wine or a Moscow mule in hand and time to wander around the gardens to admire Charles Umlauf's The Kiss, you'll see why I say, "Sure, twist my arm."

The first act took place near the pond and included three dances: "Once 'Round the Sun" and "Scene 2," both choreographed by Performa/Dance Artistic Director Jennifer Hart, and the last, "Gnosis," by choreographer Alexa Capareda. Dance is an ephemeral thing. I've learned from years of trying to write about it that dancers and choreographers don't always think in terms of story, as writers do, but often create an emotional response to music, space, or physical phrases, shapes that the body makes. Hart offered that her pieces largely arose from a reaction to the music of Catherine Davis, whose work she loves. Live cello, performed by Eve Galbraith, was also an occasional accompaniment. The audience encircled the dancers on a stone path beneath a ring of green trees. I think it's safe to say that though they sometimes stood or squinted through sunlight, most were enraptured by the moment, this type of art in such a beautiful setting. It's a moment that clarifies, without irony, just what art, beauty, and nature can bring.

There was an intermission of 15 or so minutes – who's counting in such a relaxed atmosphere? – before the next piece, "Salt and Folly," also choreographed by Hart, took place in another part of the park. The scene featured a chorale of six buffoonish court dancers vying for attention, a crowd-pleaser. We laughed at them laughing at each other in a comedic ballet that seemed to reflect on today's incessant Instagram culture, the Kardashians, or our current president, if there is an actual difference anymore. Hart related that the piece will be developed over the coming months into a larger, full-scale performance, and I look forward to seeing it when it's done. It's seldom we think of ballet as being so light and easy to enjoy, but this definitely was (unless it was the wine).

Live at the Umlauf is meant to be a response to the current space crisis in Austin, a city with so much fine culture to offer but not always affordable spaces to house it. The Umlauf donated what it had to give – its quiet, picturesque gardens – and I would definitely recommend that we all keep watching for what comes next. Unless, of course, you'd rather spend the summer stuck in some dusty theatre. 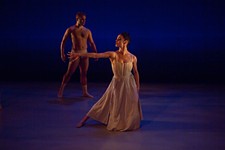 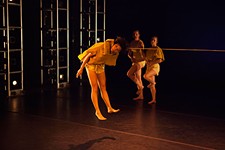 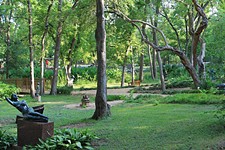 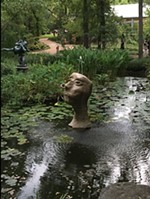