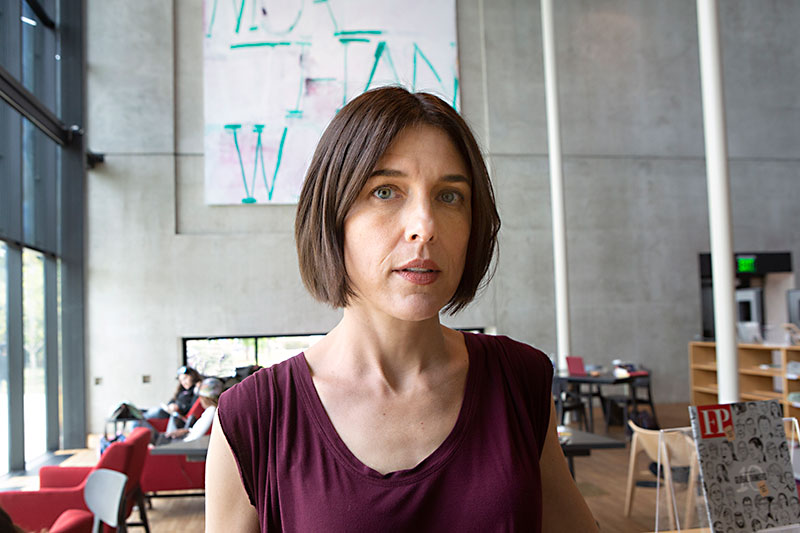 "I trust that there are very few artists out there who approach what they're doing with a sense of like, 'I'm going to pull a fast one on people,' or 'I have utter disdain for humanity and I hope I make a lot of people feel stupid,'" Carrie Fountain says from across a blond wood table. "Everyone's intention is, 'This is the weather where I am – send word!'"

The weather where we are is overcast, but the huge windows we're sitting next to let in enough natural light that the place just avoids feeling dreary. We're at Hank's, a chic Windsor Park restaurant and coffee shop that Fountain haunts with some frequency – when we first sit down, she merrily shares that she's been officially recognized as a regular by one of the staff members for the first time earlier today. We're a little past the usual lunch hour, so business is mellow, but with the high ceilings and wide walkways, you imagine it'd feel spacious even during a rush. It's a world apart from SXSW, currently raging at the Austin Convention Center five miles away.

We've been talking about her work as host of the KUT 90.5FM radio show and podcast, This Is Just to Say (named after the beloved and eminently memeable William Carlos Williams poem), where she talks to other poets about their processes. I mention how unusual it is to hear someone be geeky about poetry and how contagious her enthusiasm is. "I really do love poetry," Fountain replies. "I mean, part of doing the show was I wanted it in my life more, you know?"

If the idea of wanting more poetry in your life seems a strange sentiment for a poet with two books (2009 National Poetry Series Award winner Burn Lake and 2014's Instant Winner) who's about to receive a pair of major state honors – designation as the 2019 Texas Poet Laureate and induction into the Texas Institute of Letters – just know that it's because Fountain has been steadily adding ambitions, achievements, and responsibilities to her plate since she received her MFA as a fellow from the Michener Center for Writers at the University of Texas at Austin in 2004. "Writing poetry – that was all I was doing," she says, narrating her life with affable frankness. "And then I got married [to playwright Kirk Lynn] and had kids. And then having kids and writing poetry and teaching was all I was doing. And then I couldn't do all of those things, so I quit my teaching job so I could write. And I always really wanted to write this novel."

The novel in question? I'm Not Missing, a deeply compassionate and carefully drawn piece of young adult contemporary fiction released by Flatiron Press last year. The protagonist, high schooler Miranda Black, like Fountain, is a half-Latina growing up in small-town New Mexico. Unlike Fountain, Miranda is struggling with the disappearance of her best friend and fellow member of the motherless daughters club, Syd, as well as navigating an absolutely bone-pulverizing and presumably doomed crush on Nick, the boy who stood her up at prom. It was a book that took Fountain a long time to write – 10 full drafts before the plot even began to emerge, as she learned to trade in a poet's writing toolkit for a novelist's. Now on the other side of it, she admits it's been difficult to switch back and forth.

"I think what I've learned is that – and maybe I'm wrong and this is just the moment that I'm living through in my writerly life and eventually it will be resolved when I'm maybe smarter or have a more well-rounded view of things, but – poetry takes a kind of singular attention?" Fountain says as our lunch arrives. "It's almost like a spiritual attention." She has the garden and goat salad, no candied pecans, and I've received the pesto rice bowl. She takes a moment to admire my poached egg, then we're back to the topic at hand. "But part of it is learning to be patient. I think there was a time when I thought that if I went two weeks without writing a poem that I'd never write another poem again. And I don't feel that anymore. Part of it is also, 'If you love something, let it go'? I trust that it will come back."

Hence, This Is Just to Say is a means of gently coaxing poetry back into the room to sit alongside her. "Do you know Rebecca?" she asks me. (Rebecca McInroy, the show's executive producer and a person I do not know personally, is one of more than a dozen female writers and artists that Fountain name-checks as inspirations or major contributors to her success and her field over the course of our meal. There's such a mix of precise attribution and careless generosity in every mention.) "[Rebecca and I] actually had a joke conversation after Garrison Keillor was canceled – I mean, literally cancelled, The Writer's Almanac went away – and because I have very high self-esteem apparently, I was like, 'We should call them and we should do it now, that's what I'll do now,' and she was like" – Fountain puts on a high, concerned voice to play McInroy – "'Okay ...'" She laughs. "And Garrison Keillor owns all the rights to that, and they were like, 'No more Writer's Almanac' anyway, but we just started talking about it and her enthusiasm is contagious. And I really wanted to be able to talk to poets about how they do their stuff. Because I think that people are scared of poetry. I think I'm sometimes scared of poetry! And I hate that feeling. Poetry is mystery. Poetry is chaos. It's an experience. It's not – that's why people hate poetry, it's because we're taught to find out what it is."

"That it's trying to trick you," I offer.

"Yes, and then you take a test on it," she replies. Her daughter Olive recently took the STAAR test and was the top of her grade, but Fountain's husband noticed that the one question she got wrong in the reading section was about interpreting poetry. "Naomi Shihab Nye," Fountain says, referencing the San Antonio-based poet and winner of the Lon Tinkle Award for Lifetime Achievement from the same Texas Institute of Letters that Fountain will be joining at the end of April, "they once put one of her personal essays, which she did not write for the STAAR test, in one of those tests and then years later someone had her take the test, read her essay, and answer questions about it? She didn't answer the questions about her own essay correctly."

The conversation continues to blossom and twist around favorite poets, how women's autobiographical narratives are so often pooh-poohed (Fountain, doing a mean face and imitating a dismissive dude: "'Ugh, what are her poems about? Changing her tampon?'"), and everything that lies ahead of her right now. At one point, Fountain laughingly describes one of her creative moments of realization as akin to the one Lin-Manuel Miranda had when he came up with the premise of Hamilton, and while she attributes this comparison once again to her "little-bit-too-high self-esteem," it's not without real merit. Fountain might have a little less raw theatre kid energy – no one would call her poise or steadfast, warm eye contact from across the booth frenetic – but the sheer breadth of her interests and her joy and commitment to pursuing them is pleasantly familiar. There's so much on her horizon: a children's book she's written about the palm forest built on a devastated plot of land in Maui by poet W. S. Merwin (who passed away days after our conversation) and a new poem, "Will You?" just published in Poem-a-Day by the Academy of American Poets. She has a terrific title for her next book of poetry, a phrase a friend said while describing a mythology-obsessed kid: Going Through the Gods. There's a next YA novel set in Santa Fe about a young woman working in a bookshop and a next-next novel she hopes she can set in Austin.

Someone else might want to make all this artmaking more complicated or shroud the stumbles of that work from the public eye, but Fountain is the magician who wants to show you all her tricks. She doesn't want you to be scared, and she doesn't want you to be fooled. "In some ways, I think that as I get older, my thinking about writing gets almost less complicated," she says, smiling. "You sit down, you do the work. There are enough books in the world that you could sit down and read all day every day and only read good books. There are enough good things to celebrate out there."

Carrie Fountain was formally announced as the 2019 Texas Poet Laureate at the Texas state Capitol on March 25 and will be officially inducted into the Texas Institute of Letters April 26-27 in McAllen. She is teaching a free public workshop for writers of all kinds, “Getting All the Way to the Beginning,” Sat., April 13, 10am–noon, in Fleck Hall Rm. 305 at St. Edward’s University, where she is writer-in-residence.