We got your signs and signifiers right here, mon ami – and that's just lagniappe 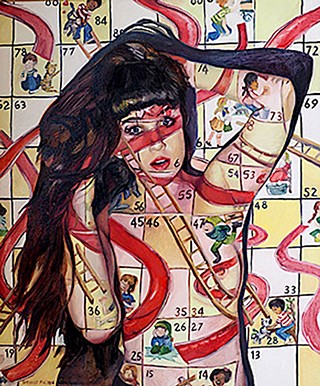 You want symbolism, artlover, you're set – because you can find it in almost any gallery anywhere, can't you? Of course, some artworks are more subtle in their metaphorical depths and others are more blatant (to the point of having only what one might call metaphorical surfaces), and we could, each of us, spend several lifetimes opening up a can of Baudrillardian whup-ass on just about anything that's been creatively expressed by humans.

And there's so much symbolism at play and at work in this "Shared Vision" currently at the Davis Gallery, a show of paintings by Denise M. Fulton and paintings by Sam Yeates; and you can read about the societal fathoms implied by Fulton's work in her artist statement; and you can infer many of the arch, philosophical calisthenics of Yeates' tableaux by regarding them with a thinking eye; and altogether it'll be some of the more complex enjoyment – some of the most fun – your brain's had for a while.

But you know what? Fuck all that intellectual, value-added goodness for a moment, okay? Never mind, if only for a femtosecond, the meaning that our sapient forebrains are so proud of discerning within a visual matrix. Because beyond that wealth of titillated cogitation sparked by "A Shared Vision," there are more basic riches to behold, and those riches are sufficient to make old King Midas seem like some pathetic pinchbeck bitch.

I'm talking about the simple optical might of the compositions and renderings here. I'm talking about painterly realism in the service of fantasy, the cares and pains taken, the prodigious skills brought to bear in rewarding a surface with such graphic power. Because you like when artists accurately capture the world we live in via their purposeful pigments, don't you? And admit it: You also enjoy when what's captured is orchestrated, is choreographed, is directed to some extent or another for best impact on a viewer's pattern-recognizing eyes.

You know how you can have models – nude humans – pose in various ways and then cover their skin with colorful designs or images via a film projector, right? It's always a compelling effect. And you know how some of the best figurative painters render the human form with impressive and even heartbreaking realism? Now Denise Fulton – one of the founders of Austin's Atelier Dojo – has combined those two creative gambits in portrait after portrait, improving the gallery's walls with a series of women occulted by light-borne patterns in a bright diversity of shapes and shades.

And Sam Yeates? Seems like he's been around this city forever, as ancient as the symbolic tropes he works in his arrangements of humans and/or animals, and I'd love to say that his skill has only improved over the years ... but I'd swear he was already this good a couple decades ago, the first time my eyes were snared by his fantastic creations. And when I say "this good," I mean "at or above the level of the Brothers Hildebrandt" – who I'm using as a comparative precisely because Yeates handles light and texture and scene composition in a way deeply reminiscent of those famous siblings. It's like if you were a young teen in the Seventies and obsessed with the fiction of J.R.R. Tolkien, and you were checking out one of those Hildebrandt calendars or books, and you got to a section of it where – whoa, this part isn't about Middle Earth, this is, like, weird scenes from our own mundane world, and it's ... fucking ... amazing.

This show is called "A Shared Vision," possibly because Fulton and Yeates share a certain vision as painters. But it's a vision – of surfaces, of depths, of meanings and material majesties – that's also being shared at the Davis Gallery right now, with you. You lucky, lucky citizen of Austin, Texas.