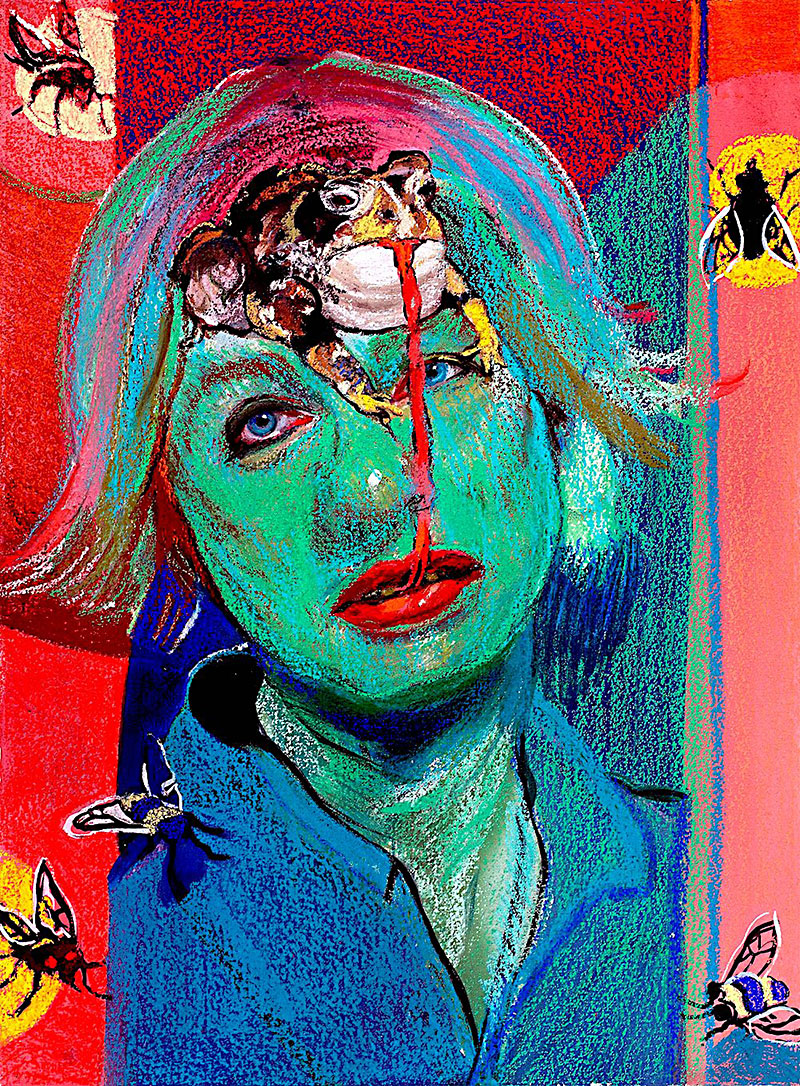 The Ungrateful Son by Natalie Frank

Once, in a thriving city by a river, there was a company of dancers who brought to their fine stage many stories of life in their times. The company was called Ballet Austin, and the man who created most of the company's dances – and certainly the most ambitious and well-received of those dances – was named Stephen Mills.

One day, while viewing a series of paintings in one of the city's more progressive museums, Mills was inspired to devise a new work of ballet for his company, a work based on the paintings he'd seen: the vivid and unsettling illustrations of tales that had long ago been gathered by the Brothers Grimm, as rendered by a former inhabitant of the city: Natalie Frank.

"I saw Natalie's exhibit at the Blanton," says Mills. "And, earlier, I'd seen her show at the Drawing Center in New York, which was maybe 30 drawings. When 'The Brothers Grimm' came to the Blanton, the space was larger and the show was more robust. And when I was standing there, looking at the things, I thought it would make a good dance. And someone came up to me – someone who I didn't know, but I guess they've seen Ballet Austin and some of the things that I do – and she said, 'Wouldn't this make a great ballet?' And I thought, Well, thank you, yes, I think it would." And so, this weekend, Ballet Austin will offer to the world its Grimm Tales – short narrative works of dance, presented one after another, sans intermission, and vibrantly alive with the strengths of artist Frank and choreographer Mills.

But of course ballet – and dance in general – relies heavily on music, and so Mills must engage the participation of a third collaborator. Fortunately, he's already established a working relationship with one of the city's most acclaimed (and prolific) composers: Graham Reynolds, of Golden Arm Trio fame and Rude Mechs tenure and several Richard Linklater film scores. The first time they'd worked together, back in 2007, it was to create a ballet based on Houston artist Trenton Doyle Hancock's weird and complex body of work.

"With Trenton's world," says Reynolds, "it was a mythology he'd created since he was 7 years old – and we were doing a chapter within that mythology. With Natalie, she's taking the Grimm tales and doing a visual reinterpretation of them, and we're taking three of those stories and using her visual world to make a ballet. The biggest challenge is to create music that has the looseness and rawness that I like. Usually, we improvise and there's flexibility to what we do – but we can't improvise with a set ballet. So it's about figuring out how to make music that can then be deconstructed and reconstructed to sound as raw and visceral as music that actually does have that looseness to it."

"Graham's such a wonderful collaborator," says Mills. "It doesn't have to be done until it's done on the stage, with him. And he's not precious about it – we're all just looking to get the most interesting, curious ideas out of the process. So we sat and considered, well, we've got five scenes in this story, and six scenes in this story, and we thought about the overarching emotion in each story, about how they're different. For instance, we start with "The Frog King," which is the lightest of the stories, and then "Snow White," and we finish with "The Juniper Tree" – which ends up with a little boy being baked into a pie. So it goes from the lightest to the darkest, and each of those environments have to sound different – but with one sonic through line. And I'd tell him the lengths of the sections and he would build out a framework. And we'd just dialogue back and forth about it, whether they needed to be darker or lighter."

"Stephen and I have done so many projects since that first one that, ah," Reynolds pauses a beat, "communication is simpler, I guess?"

And the communication is also successful, it seems, for all concerned in this enterprise.

"Stephen is the consummate artist and leader," says Frank. Stephen Mills
“I’ve never worked with this many talented people on one project,” says Frank, “and it’s been a fever dream to bring these wonderful tales to life – as if right out of my drawings – with all of the color and heat and violence of the unsanitized versions.”

"I've never worked with this many talented people on one project," says Frank, "and it's been a fever dream to bring these wonderful tales to life – as if right out of my drawings – with all of the color and heat and violence of the unsanitized versions."

"These Grimm stories are so dark," says Reynolds. "And in modern times, we got to – uh, who's the purple dinosaur?"

Reynolds offers a cross between a smile and a grimace. "Barney, yeah," he says, "where kids' stories were super-protective. And, meanwhile, with the internet, kids see the whole scope of what the world really is. And there's something about the Grimm tales, about that grit, that just resonates. I can't imagine someone a hundred years from now doing a Barney ballet, you know?"

But someone – the trio we've highlighted here, and the dancers of Ballet Austin – is doing a Grimm Brothers ballet this weekend, abetted in their sublime industry by costume designer Constance Hoffman, set designer George Tsypin, and others – with the whole narrative scheme finessed by writer Edward Carey.

Is it any wonder that fables are where we get the word fabulous from? And of course they're often more than mere cautionary tales for the kindergarten set.

"I didn't want to just tell children's stories," says Mills. "And when these stories were originally being told, there was a lot of hunger around the world. And I thought, well, there are different ways to think about hunger – not just hunger for food, nutritionally. And we chose these stories because they reflect sexual hunger, and hunger for beauty, and hunger for power. It's that sort of emotional and psychological perspective that drives these stories."

And, reader, it will likely be your own hunger for beauty – for the well-wrought arts of dance, image, music, and storytelling – that drives you to experience Ballet Austin's Grimm Tales, at least once upon a time, in this thriving city by a river.

A version of this article appeared in print on March 29, 2019 with the headline: Brutally Frank