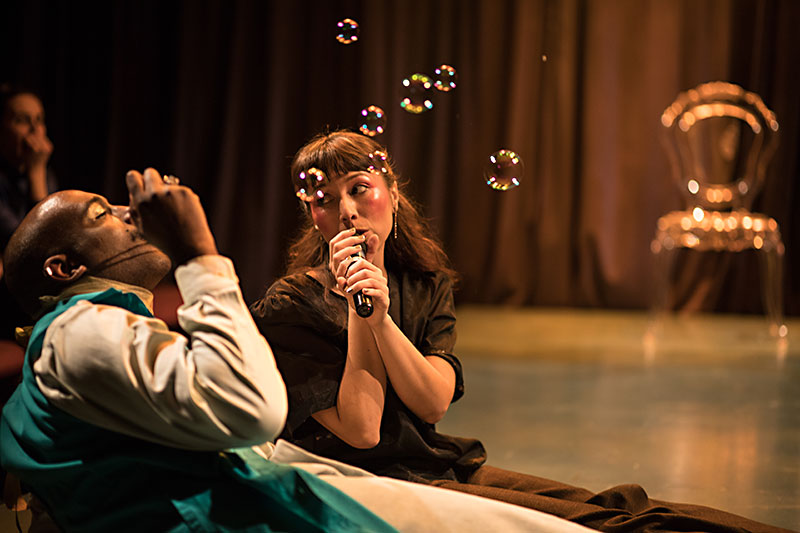 You can tell by the way he sits in it – ramrod straight spine, limbs at right angles – that this man loves his throne. So what if it's just clear plastic? This is his seat of power. From it, Kreon is able to rule over Thebes, to decide the fate of all who come before him, to be The Law.

So when Antigone is hauled in for the crime of burying her brother – a traitor whose corpse Kreon decreed must be left in the open to be picked apart by birds, even though he was Kreon's nephew – her talk of justice and obeying the will of the gods doesn't cow Kreon. His power trumps all. So despite her being his niece – his niece(!) and his son's fiancée – he has no problem condemning her to be buried alive. Of course, anyone who trusts in the dictum that "Authority is authority," as Kreon does, is ultimately going down, and much of what drives Salvage Vanguard Theater's staging of Antigonick is our knowledge that Kreon eventually will be pulled from his beloved throne.

That isn't to say Antigone is any less central to this version of the tragedy bearing her name. Indeed, she's the riddle that poet Anne Carson seeks to solve in this translation/adaptation. In a prologue addressed to Antigone herself, Carson sifts through ideas about the heroine posited by others – George Eliot, Judith Butler, Hegel, Bertolt Brecht – like a tongue probing for a missing tooth. But the Antigone she offers, while fierce – and Megan Tabaque brings all the defiance here, her Antigone giving as good as she gets from her uncle, the dark rouge coloring her cheeks suggesting flames that fuel her fiery retorts – knows where this confrontation is headed, and she's accepted her fate. "Of course I will die/ Kreon or no Kreon/ and death is fine/ this has no pain," she tells her uncle. "To leave my mother's son lying out there unburied/ that would be pain."

Antigone's death is tragic, but it's Kreon who's set himself on high above Olympus' summit, so he has farther to fall – a feeling accentuated by Jay Byrd's tall figure, towering redwoodlike over Tabaque's Antigone and the rest of the cast, hubris hanging off him like leaves. His impending tragedy looms larger.

When that tree topples, though, you may not expect to feel much of an impact given the irreverence of the script: Antigone and Ismene quarrel over whether a line is quoting Hegel or Beckett; the Chorus responds to the news that Teiresias' prophecy of Haimon's death has come to pass by saying, "Okay Teiresias, point match game." And Carson repeatedly reminds us that this is a play – and one with a lengthy history. At one point, the Chorus remarks, "Remember how Brecht had you do the whole play with a door strapped to your back?" On making her lone entrance late in the play, Kreon's wife Eurydike announces, "This is Eurydike's monologue/ it's her only speech in the play/ you may not know who she is/ that's okay." SVT co-producing Artistic Director Diana Lynn Small has infused this staging with a kindred trickster spirit that provides delightful surprises throughout – characters brandishing handheld mics and blowing bubbles and tossing confetti (which is then dutifully swept up by an ensemble member); a game of "Tele­phone" with lines of text passed through the audience, whispered ear to ear. And suspended above the runway on which the action occurs is a "chandelier" that designer Lisa Laratta has made from scores of plastic bottles, the soft noise of their bumping against one another like the muttering of another Theban chorus unhappy with the direction of this tale.

These elements and the fine ensemble's full embrace of them refresh this ancient tale, giving every move forward, however familiar, some unexpected turn, something new to see and delight in. And yet, both Carson and SVT never lose sight of the endgame here: the tragedy. The deaths and departures are treated with the gravity of the original, and they land with us. When Kreon finally falls, Byrd's cry that he is "Late to learn O yes I am/ late too late," it is a true howl of pain, the howl of one whose pride and arrogance have been seared from his flesh. No son. No wife. No throne. No Law. Only a man, full of loss and lost. And so, as a production rich in imagination and wit draws to a close, the earth shakes a little.

A version of this article appeared in print on March 29, 2019 with the headline: How Far to Fall 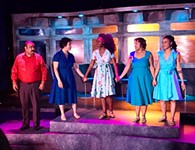