In this spring concert, a profound and moving tribute to a missing member of the Theatre & Dance Department community 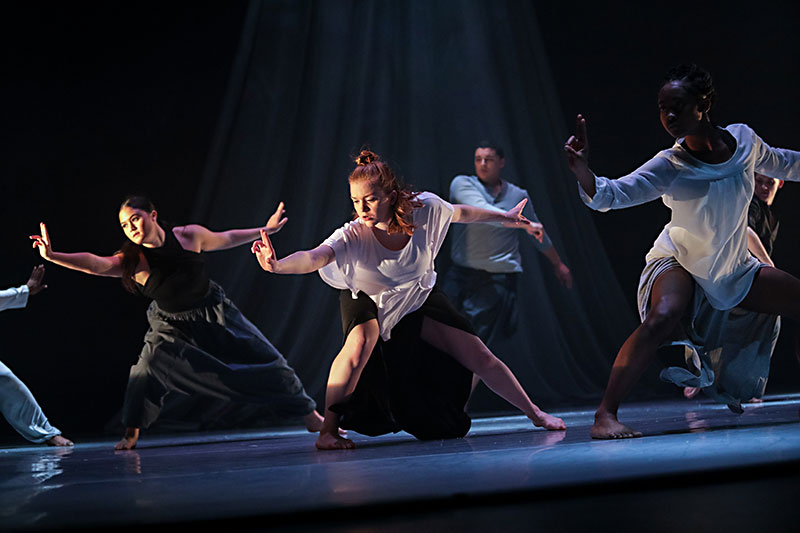 A hand fluttering over a chest. Such a simple gesture, and yet the one made onstage captured what was taking place inside me at just that moment: an unsteadiness of emotion, a trembling of the heart. For this piece concluding Dance Repertory Theatre's spring production, Fortitude, had begun a journey of remembrance for someone gone, someone who had been held close in the hearts of the larger community but held much closer in the hearts of this community of students, teachers, and workers within the Department of Theatre & Dance at the University of Texas. She had belonged to that community for a brief time – too brief a time – but long enough to have made her own space within that body, to have formed attachments to others, to have been known. The violence with which she was taken away added to the shock of losing her so suddenly and the tragedy of a young life being cut short, and so for three years her absence has been a presence in the Winship Drama Building, a collective awareness that one who was there and should still be there is not. And now, in what should've been the final semester of her senior year, a time of completion and fulfillment, here were all the students in the program – some of whom had taken their first steps in the studios here at the same time she had – joining together to recognize her and honor her in the space where she should have been moving with them. It was a moment profound in its embrace of life and death, communion and loss, and in honoring those who have gone with those who remain. As such, its movements and gestures sounded the deepest of feelings.

Charles O. Anderson, head of the department's dance program, created this work, Idòbálè – the title referencing the Yorùbán concept of "showing respect upon greeting and leaving" – through the Haruka Weiser Endowed Excellence Fund in Choreography. In the program notes, he mentioned this being the year Haruka would have graduated and called it his "humble attempt to offer her a ceremony to mark that occasion." Among the dance's most potent sequences were those drawing on the imagery of graduation: dancers filing down the aisles on either side of the audience, then moving onto the stage; white robes laid across the outstretched arms of dancers before slowly and deliberately being set in a pile onstage; some dancers removing robes from the pile and dressing others in them; the robed dancers' movements then suggesting both graduates and angels. But Anderson and the company – he credited the full DRT ensemble with Idòbálè's development – also filled the dance with expressions of grief, supplication, and honor: two dancers prostrate, beating the floor with their fists; a dancer with a right arm raised, the hand closed in a fist, the left arm bent with the hand in a fist beating the stomach; dancers kneeling with one hand over their heart and the other raised to the sky; dancers with both arms raised to the sky; dancers bowing at the waist and stepping backward. Every gesture, every step, seemed motivated by honor, by a desire on the part of all to pay tribute to the missing member of their community, to dance for her. The collective effort, imbued with such reverence, created a rare beauty and emotional release.

Fortitude was not without other remarkable moments, some of which also addressed presence and absence – most notably Andrea Beckham's duet Scar, danced on March 10 by Ginnifer Joe and Becky Nam, which was striking in its depiction of two bodies (and spirits) moving as one and the effect of one leaving the other. And Raphael Xavier's hip-hop work Sometimes: Life-Gates & Keys best exemplified the spirit of the full program's title, as five dancers – with Joe and Nam among them – strove to follow the instructions of a voice that urged them to "go all the way," spinning, flipping, breaking, and twirling in frequently stunning shows of physical strength, determination, and fortitude. But there was a purpose in closing the performance with Idòbálè. It was a culmination, taking something that had been held inside for three years – a weight of loss – and setting it free in a glorious gesture of motion and light.

A version of this article appeared in print on March 22, 2019 with the headline: Well Remembered