Zach Theatre's Notes From the Field 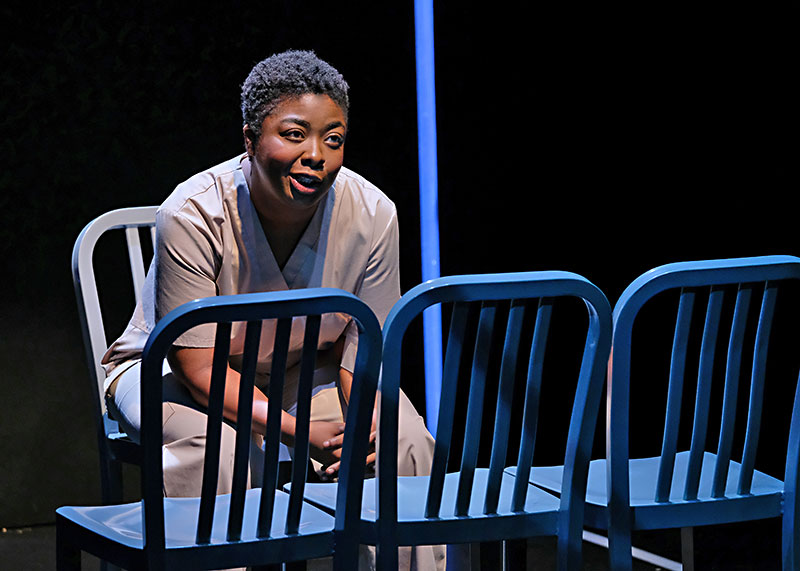 In this era of fake news, serious theatre artists are making sure there is an element of authenticity in their storytelling. Documentary dramas, which merge journalistic principles with dramatic theatricality, are sharing the stage with more escapist fare. And verbatim plays, culled from interviews and archival material, serve to recognize dysfunctional forces at work, inform the conversation about them, and help change the system that created them.

Leading the charge in this arena is playwright/actor Anna Deavere Smith. Her critically acclaimed reality-based plays have addressed the national debate on health care (Let Me Down Easy), examined the Crown Heights riots (Fires in the Mirror), and exposed the tensions surrounding the L.A. riots (Twilight: Los Angeles 1992). Her Notes From the Field – which is receiving its regional premiere at Zach Theatre under Artistic Director Dave Steakley's velvet-gloved direction – calls out America's criminal justice system and the centuries of injustice it's built upon.

The play, which The New York Times named among the Best Theater of 2016 when it appeared off-Broadway, was inspired by devastating U.S. government reports that tell of how poor African-American, Native American, and Latinx children have been suspended and expelled from school more frequently than their middle-class white counterparts. In short, they have been systematically criminalized and disenfranchised. For Notes From the Field, Smith interviewed more than 250 people touched by this injustice to generate a condensed collection of open-wound monologues that tell their stories.

Among the 16 portrayed storytellers is Sherrilyn Ifill, president and director-counsel of the NAACP Legal Defense and Educational Fund, who provides a sobering overview of the "school-to-prison pipeline." The Rev. Jamal-Harrison Bryant, who spoke at the 2015 funeral of a young man who died at the hands of Baltimore police officers, sermonizes. We meet Niya Kenny, a student at Spring Valley High School in South Carolina, who was arrested for standing up for a classmate who was viciously body slammed by the school's white resource officer.

Taken together, these voices bear witness to a great wrong and inspire us with their accounts of perseverance, resistance, and slow but steady progress.

Although the play was conceived as a one-woman show for Smith, the performance on the intimate Kleberg Stage features four actors who divide the workload: Michelle Alexander, Carla Nickerson, Kriston Woodreaux, and Zell Miller III.

What is lost in this adaptation is the opportunity to witness a master class in solo performance. But what is gained is a greater sense of continuity among the monologues, since there are no longer breaks in the action for Smith's costume changes. The transitions are so seamless that they create the illusion of dialogue among the monologists, where individuals who in life never had occasion to speak to one another are at least in the same room. And there is immense power in that.

The power is amplified by absolutely brilliant performances by every member of this cast. Their emotional investment and attention to detail molds real people from transcripted material, regardless of whether the actors' demographics match those of the people they are portraying. They sit on chairs, use no props, and tell their stories.

Stephanie Busing's scenic design makes sure that their performances are given our undivided attention. The stage floor and back wall are painted black, and within our peripheral vision are suspended screens on which grainy mobile phone images of hate crimes and still photos from news sources are projected to complement the narrative. Ambient sound, such as police sirens and church chatter, are provided by designer Craig Brock, and theatrical lighting design by Rachel Atkinson, which includes strips of light that run the length of the stage floor and up the back wall, add to the show's drama.

This production includes a break-out session placed in the middle of Act II that asks the audience to discuss the play's talking points in the hope of establishing a greater sense of community. This is well-intended, but the work speaks for itself and should be allowed to without interruption. After all, that's what documentary dramas do.

Notes From the Field