An imposing collection of large-format photographs greets you when entering "Kambui Olujimi: Zulu Time," the artist's first solo exhibition in Austin, currently on view in the Blanton Museum of Art's Contemporary Project gallery. The Black That Birthed US / Ville Radieuse, habite-à-machine (The Radiant City, the living machine), Mash Up #2 wallpapers an entire gallery corner with black-and-white aerial images of St. Louis' Pruitt-Igoe public housing project, both before and during its controlled demolition in the early 1970s. These images may look familiar to some: The dramatic leveling was televised at the time and later became iconic footage in the 1982 experimental film Koyaanisqatsi – a Hopi word meaning "life out of balance."

Vintage Polaroids harkening back to African-American family nostalgia curiously dot the cosmic backdrop, intersecting and overlapping with this inner-city imagery, contrasting the outward force of the big bang with the forceful implosion of these housing projects. One Polaroid shows two black children smiling shyly at the camera while seated on the lap of a scowling Santa – a St. Nick who perhaps preferred dreaming of a white Christmas. Hung higher on the adjacent wall is a more contemporary photograph of a youngster whose face we cannot see, only the back of his millennial hoodie centered in a gilded, antique Victorian oval frame. Olujimi has spanned several American eras and generations with these images, in a historical visual inventory to measure what real progress has been made for the African-American community in the years since the demolition.

Olujimi is the rare Brooklyn artist who was actually born in Bed-Stuy, not just currently based there. Inspired by the community leaders and neighborhood activists of his early life, the 43-year-old artist works with a broad variety of mediums, using a sharply focused sociological lens to convey the unapologetic directness of his work. Everyday objects become uncomfortable totems in Olujimi's art, poking out from the fascia of social injustice surrounding, separating, enclosing, and connecting our society.

Fathom is a floor sculpture made of illuminated chandeliers piled messily onto a makeshift raft, sitting quietly in the gallery space like a boat stuck on a sandbar. The fancy glass lighting looks as if it might have crashed down from the ceiling above as it adorns a rickety wooden crate resting on top of two rubber inner tubes: a mishmash of useless junk and high-end treasure reminiscent of trash cluttering the curb somewhere on the Upper East Side on collection day. The image is disturbing and brings to mind the countless refugees who have risked (or lost) their lives on similarly constructed rafts. The artist seems to be posing the question: Do we value the opulence represented by these chandeliers more than the human lives that such makeshift rafts so often carry to shore? 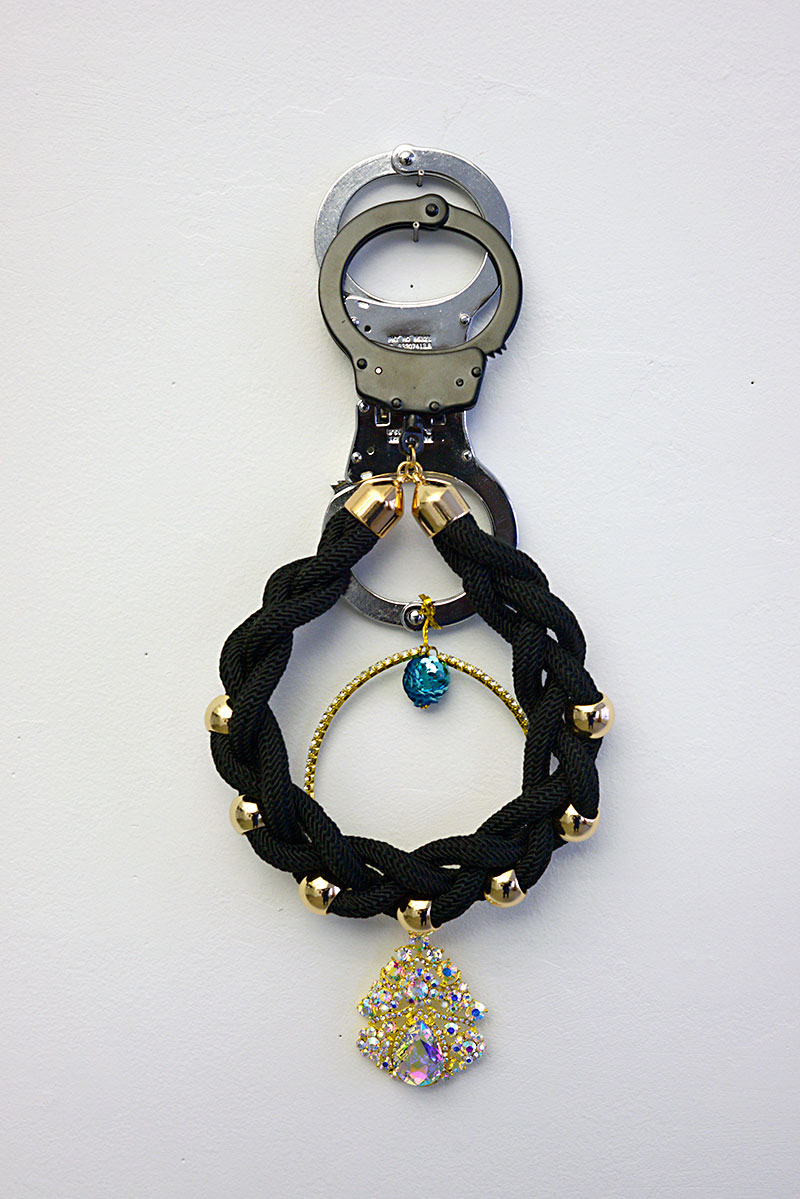 Stowaway, from the series Killing Time

But perhaps the most powerful artwork in this show is Killing Time, a collection of delicately strewn, bejeweled handcuffs hanging from each wall like ascetically hung nooses. Feathers and cheap rhinestones brighten the metal restraints, as long, thin strands of silver and gold hang from each cuff. These costume-jewelry handcuffs look downright kinky, a subtle nod to the "fetishism of commodities," Karl Marx's phrase for humanity's obsession with material objects regardless of whether they hold any real or intrinsic value. (Think Adam Smith's comparison of an expensive, rare diamond to the precious resource of clean water.) The exquisite display of handcuffs demonstrate that human life itself – when trafficked, imprisoned, or even enslaved – is commodified in order to better serve those in economic power. The prison-industrial complex, privatization of prisons, sex trafficking, sweatshop work – not to mention those just trying to get by on minimum wage – all cuffed and commodified by the capitalist system.

Which circles back to the name of this exhibit: Zulu Time is synonymous to Greenwich Mean Time (GMT), the zero-degree longitudinal line running through Greenwich, England, constructed by the British Royal Navy in the late 1800s. Even our notion of time, the most valuable commodity any human being can possess given its finite quality, is framed and controlled by an empire on which the sun never sets. "Zulu Time" is the perfect double entendre for a show exploring themes of power, domination, and exploitation within societal hierarchies. In military terminology, Zulu Time has nothing to do with the Bantu ethnic group of sub-Saharan Africa; it is simply the NATO phonetic word used for the letter "Z" when referencing this British time zone. One more example of the dominant powers overlooking and overtaking: a poetic irony that Olujimi has perfectly spelled out in this compelling show.

A version of this article appeared in print on March 15, 2019 with the headline: Mean Time