This musical comedy embrace of Eighties pop culture is served up with all the energy, excess, and extravagance the decade deserves 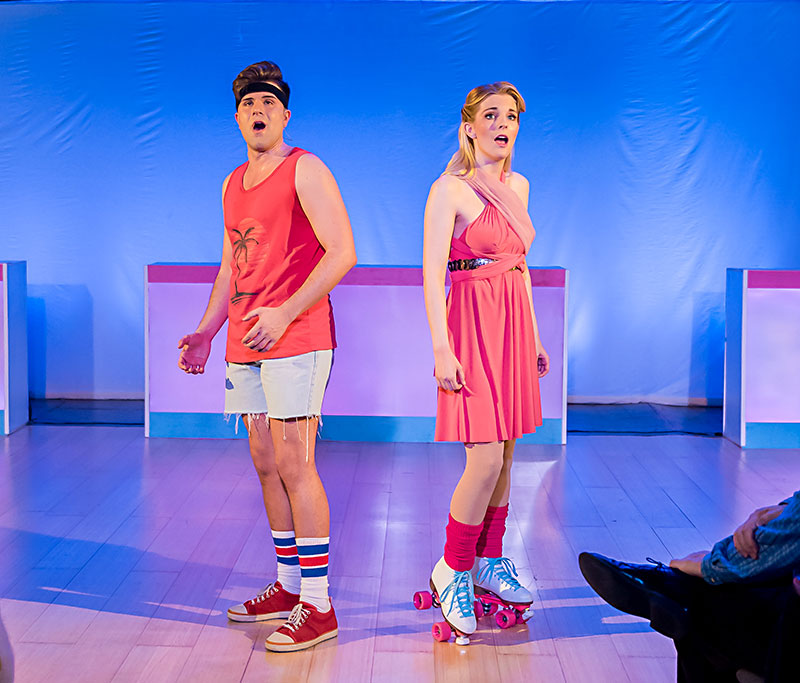 First things first, let me clarify that I was not around during the 1980s. I didn't experience the loud fashions, extravagant music, or hair. As a result, I viewed TexARTS' latest production not through rose-colored lenses, but at face value. I'll admit I had my reservations about approaching Xanadu this way. Considering how contemporary stories like Stranger Things or It succeed with Gen X audiences by virtue of their nostalgic themes, I was worried a musical based on a 1980 Olivia Newton-John film might be lost on me.

Xanadu tells the story of Clio, the ancient Greek muse of history, who comes to Earth to inspire struggling mural artist/valley dude Sonny Malone. Concealing her divinity, Clio disguises herself as "Kira," a roller-skating dream girl with a bad Australian accent. (This is where, if I weren't so young, I'd say, "Sure it's weird, but that's just the Eighties!")

Xanadu's world seems populated exclusively by frantic, high-energy characters who emote solely through catchy Electric Light Orchestra tunes. From the top, we're thrust into an overpowering sensory experience that feels fantastical and predictably retro, thanks to an odd mix of Greek mythology and Eighties California aesthetic. Here, the excess of the era is communicated via physicality. At one point, a chorus member lands a back handspring in the middle of a tap routine while actors on roller skates frantically zip through the snug Morris Theatre, taking twists and turns with breathtaking precision. During the show's 90 minutes, I didn't engage with Xanadu so much as it hit me like a speeding party bus.

For a show that feels like a Broadway megamusical crammed into a black box theatre, I was struck by how minimal the staging is. Bare save for three raised platforms, the set consists primarily of electric brights and energetic pastels projected onto the stage backdrop. Filling this blank canvas with larger-than-life characters and movement, director Jarret Mallon and choreographer Kimberly Schafer deserve props for staging a performance that reaches every corner of the space without becoming claustrophobic.

Amidst the production's extravagance, choice performances shine through, keeping us grounded throughout the experience. TexARTS regular Daniel Drewes plays oblivious Sonny with a mix of laughable airheadedness and childlike innocence. This clueless-by-nature character seems essential to keeping the audience invested in this story of gods and strange magic, and could easily fall flat if not portrayed by someone who oozes Drewes' charisma. This same charisma gives University of Texas alum Mandy Foster more than enough to play off of in the demanding role of Clio.

While these two exhibit just enough chemistry to get by, the sparks really fly between our antagonists. With keen eyes for characterization and effective comedic timing, seasoned actors Megan Richards Wright and Amy Nichols imbue the scheming sister muses Melpomene and Calliope with the flamboyance of Disney villains. Whether they're engaging in crowd work or delivering jabs at the script itself, the duo's self-aware performances play a major role in keeping this cheesy-at-its-core production palatable for its entirety.

With a genuine sincerity balanced against healthy amounts of cynicism, the many unique cogs of Xanadu mesh together to create a show greater than the sum of its parts. TexARTS' production is distinctive in that it doesn't rely solely on nostalgia to please (though it easily could). Rather than relying on a pre-existing fondness for Eighties pop culture, Xanadu directly serves its audience the thrills and excesses that have come to define the era. I might not have lived through the Greed Decade, but by attending Xanadu, I feel like I've at least been brought up to speed on it and can now understand why it occupies such an exalted place in the minds of those who lived through it.

A version of this article appeared in print on March 1, 2019 with the headline: TexARTS’ Xanadu 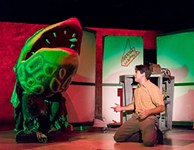 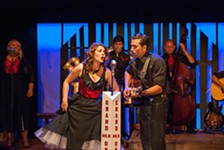 Ring of Fire
A talented cast and band evoke the Man in Black in TexARTS' Johnny Cash musical, Ring of Fire