A contemporary script, powerful acting, and fantastic swordplay combine to create a heroic journey that's fun and easy to get lost in 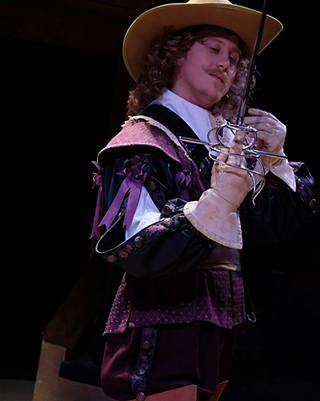 As a child, my Sunday afternoons were spent adventuring in my backyard. With a branch as my sword and my dog as a noble steed, I imagined my fight against the forces of evil. Today, these escapades are behind me, with my Sundays now spent attending plays as a critic. On occasion, however, past and present will collide, and I'll experience a production that reawakens the venturesome kid I once was. The Three Musketeers was one such occasion.

The Mary Moody Northen Theatre's latest production tells the familiar tale of d'Artagnan, an idealistic farm boy who, alongside the musketeers of the title, must save France from a fiendish plot to overthrow the crown. Although Alexandre Dumas' story has been retold many times before, the vibrant world that director Michelle Polgar creates via mindful casting and sharp choreography encourages audiences to leave behind adult cynicism and lose themselves in a swashbuckling adventure.

Despite adhering to the predictable plot of its source material, this stage adaptation – penned by onetime Austinite Megan Monaghan Rivas – feels markedly contemporary in its approach to inclusion. A small but powerful change, several major male characters are played as women, inhabiting an idyllic 16th-century France that treats all genders equally. Rivas' rewrite allows performances like senior Sierra Boudoin's commanding turn as musketeer captain Tréville to stand on their own, without so much as a second thought given to the inequalities of the era. The result is a retelling that is timely rather than a product of its time.

While its inclusive script is easy for a modern theatregoer to engage with, this Three Musketeers kept both my adult and juvenile selves engrossed with its charged combination of skilled wordplay and impressive swordplay. A sucker for good dialogue, I found that the moments of quick banter among the show's leads (as when the swordsmen compose poetry during sparring practice) conveyed a seemingly effortless camaraderie among the musketeers. This meticulous repartee also brings dramatic weight to the times when words fail and rapiers must do the talking. Whether it's a charged duel between individuals or an all-out brawl featuring nearly the entire cast, the production's stage fights showcase fight choreographer David Long's fluid blocking and intensive rehearsals. My inner child couldn't help but remain on the edge of my seat as the spectacular action unfolded.

Dialogue and blocking aside, what raises the stakes most here is the enthusiasm of its antagonists. Joining The Three Musketeers' student cast as the scheming Cardinal Richelieu, professional leading man Marc Pouhé flexes his muscles as a character actor, exhibiting both the quiet subtlety of the wrongfully convicted Tom Robinson from To Kill a Mockingbird and the cartoonish zest for evil of the titular Simpsons villain from Mr. Burns, a post-electric play – roles that Pouhé also played on the MMNT stage. As the sleazy thug Rochefort and the cunning fatale Milady, respectively, seniors Hollis McNutt and Michelle Clarke hold their own against heavyweight Pouhé. (Clarke inhabits her character with such delightful deviousness I was surprised to find she wasn't another professional hire.) As with all villains we love to hate, we're left wanting more once these lovable baddies are brought to justice.

These powerful performances, combined with Rivas' contemporary script and the fantastic stage combat, create a heroic journey that's easy to get lost in, as well as a show that is, at its core, fun. Considering how accessible this production is to audiences of all ages, I wasn't surprised when a child seated a few rows from me began yelling during the sword fights. Although his interjections proved distracting, I can't hold it against him. After all, I was once that excitable kid – and for a few hours on this Sunday afternoon, I was once again able to embark on an adventure.